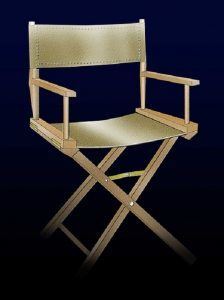 Janet Yellen steals the show again as the minutes of April’s FOMC meeting are disclosed revealing a hawkish tone re-emerging and, for the first time a direct reference to the possibility of a June rate hike. Ladies and Gentlemen, we have a live meeting. However, the market is not quite so convinced even though the gap has narrowed and the negative reaction seen immediately and quite violently in the equity markets, in commodities and emerging markets , all eased as the week closed with a good deal of pared losses.

The speculation is set to continue and since the meeting is not that far off, undoubtedly will ramp up a gear leaving us with increasing volatility and unexpected shifts in both sentiment and direction.  Goldman Sachs have stirred the oil pot with interesting results and the arguments continue as to whether the path for prices is up or down.

The week closes out as the G7 meet in Japan and it looks like a stalemate on how to deal with the global stagnation after excessive stimulus. Perhaps because there is no solution.

So let’s take a look at the issues of the week in the order that they occurred, what was driving prices, how the sentiment was affected and what we might expect In the week ahead.

Goldman Sachs surprised the market with their announcement that the over supply issue has come to a sudden halt,  ‘likely shifting to deficit in May’ The upbeat remarks prompted another surge in oil prices towards 50, but reading the small print revealed a more cautious tone and any problems with supply caused in Nigeria or by the Canadian wildfires could be easily offset by production being ramped up in Iran and Iraq. There is Libya to consider as well. So it isn’t as sudden as the headlines lead us to believe…if indeed we believe them at all. Previously oil bears and interested in their own performance goals they have attracted criticism which includes creating an opportunity to sell into strength.

The views as to the path of prices remain divided and justifications can be made on both sides. The midweek rally in the USD had its own effect on oil and by the end of the week it still looked toppish: 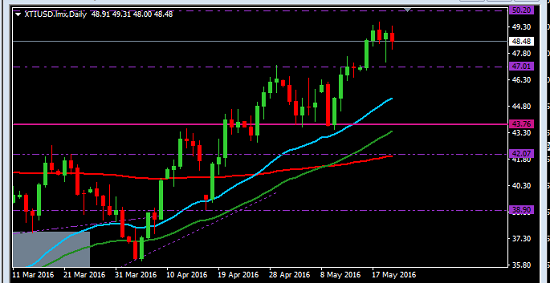 As for the Saudis hot on the diversification trail, the fact is around 60% of their exports are to Asia. With the Fed on the verge of higher interest rates and the growth prospects for large parts of the Asian zone dimming further that must be a cause for concern. India, it is true is showing signs of growth and potential but will it be enough to absorb the Middle Eastern supply?

This market may have further to go and the supply demand debate will always be subject to geopolitical upset. For now, what we are seeing is a number of sources talking up the market. The issue of growing global inventories, Iran the Saudis and what seems to be shrinking global growth and demand have not been solved overnight and neither is that very likely. This is a chart to constantly monitor and we should be ready for further surprises. $50 dollars is an area to watch,

Pips And Possibilities: It’s All About Her!

And there it was, the first outright mention of the possibility that the FOMC may move on rates as early as June. The market heard alright, equities dropping and the USD rising in mirrored symmetry.

There is a saying that we should not bet against the central bank, especially the reserve bank. The gap is still there although the two year yield has crept closer to the June possibility but its not a slam dunk as they say Stateside, and in fact the market is still only giving the Fed a 1 in 3 chance of making their move.

Bear in mind that the USD impacts commodities, oil, Gold, equities, emerging markets…it’s ripples will be felt globally and it will not be news that particularly the USD debt laden emerging sector want to hear. Just a nudge in the rates can make the difference between hanging on and going broke. There is a lot at stake and even if enough justification from home economic data can be gathered (and that is testing the limits) global ramifications, one would think, would render it counterproductive.  The hawk’s eye view is very different and the speculation will increase until the meeting. In the meantime the VIX has crept up to a 3 month high, shown here in the weekly perspective, 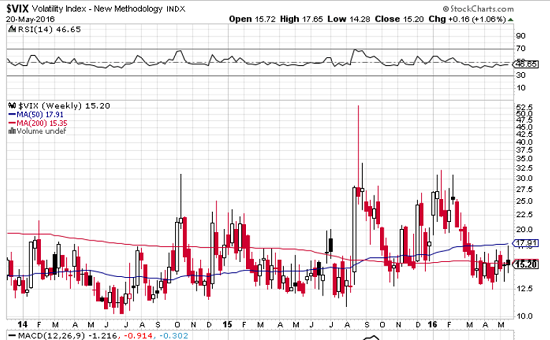 The Fed did mention the threat of Brexit and of continuing concerns over China, but after this last statement it is hard to see how they can refuse to follow through once or twice this year without losing face.

Needless to say that pending the meeting and volatility assumed, the USD does have upside potential. 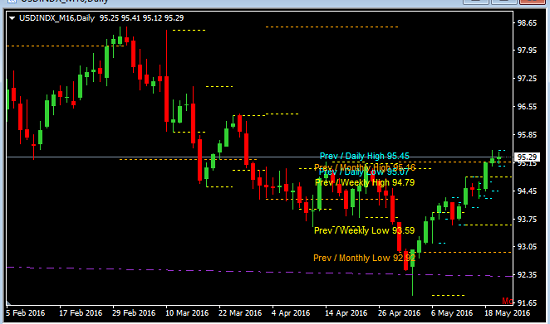 Loggerheads At The G7

As the second day gets into swing the dispute between the US and Japan intensifies, with the US, represented by Jack Lew (Yellen is there too))  is putting Japan under pressure not to devalue. Which carries a strong implication that despite any recent rhetoric, more stimulus measures are in the back pocket. This is vaguely ironic, since the tightening path that the US seem very close to pursuing, will do different but equally as much damage as a spiral of devaluation around the rest of the world’s economies.

The outcome looks very much like another stalemate and an even more fragile agreement to resist competitive devaluation which emanated from the G20 back in March. How long can or will Japan hold out, whether or not the next attempts meet the same failure as the previous QQE .

Pips And Possibilities: Sentiment and Risk

The big macro themes will all have their effect on the risk climate, which continues to shift around in both directions during the trading week. It is not easy to assess and even harder to predict and all we can do is stay aware of the themes and the catalysts and how they are received. Equities continue their declines,here is the Sand P 500, an interesting pattern on the daily and the bearishness seen on the weekly 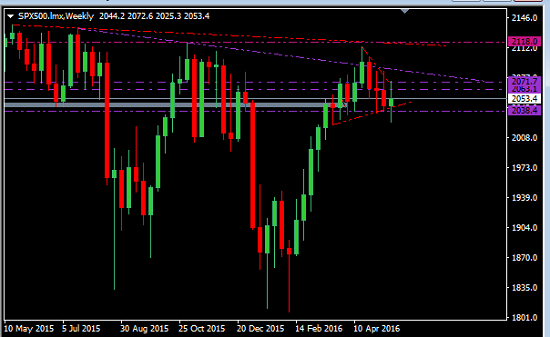 Pips And Possibilities: The Week Ahead

Monday kicks off with European PMIs,

Tuesday, Stevens speaks from the RBA, we will see consumer sentiment in Germany and the New Zealand trade balance.

Wednesday brings the CAD rate and statement and in current conditions something to pay attention to. We have the US crude inventories as usual and it will be watched!

On Thursday more data from the US with durable goods stats and the weekly unemployment claims.

Friday With the focus now fixed on the Fed until their June meeting watch US preliminary GDP. and Yellen’s speech for clues!

The opportunities continue to revolve around  the risk environment and as far as equities are concerned I shall be looking for weakness. With the German 10 year bond as low as it is, the Dax short opportunities are on the radar and waiting patiently for for the trendline to break: 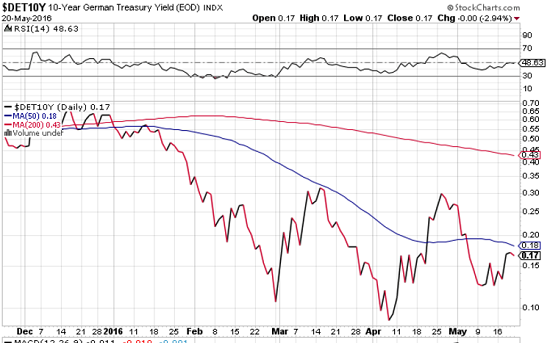 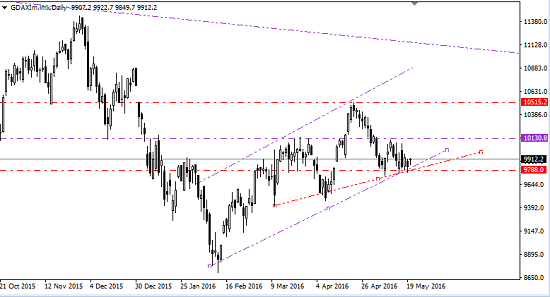 After a strong performance in the GBP this past week, follow through will be assessed, but with Brexit referendum ahead, there are uncertainties and potential pitfalls. I still like the GBPNZD, This pair has seen a nice pullback and a head and shoulders pattern to watch. There is some risk involved here because of the unpredictable environment. Same applies to the EURGBP but a great pattern and some profit taken from this last week on a short position.

The USD longs continue to look attractive as the threat of fallout to commodities and emerging markets increases in gravity. 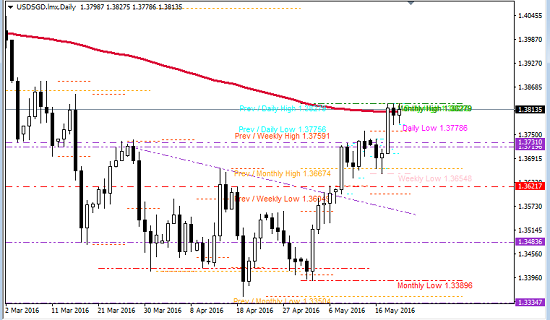 Geopolitical clouds darken everywhere so little surprise that the market is showing its fragility and fear. Just a few examples to keep us alert:

President Erdogen in Turkey has introduced legislation for new treachery laws to deal with his opposition.  Trials will be going on indefinitely and suspensions from the parliament. The controversial law was passed on Friday.

Meanwhile in the  USA, ‘The Donald’ with presidency chances on the rise, squirmed out of situation concerning Native Americans, where he had been found out financing an advertising campaign to prevent their casino businesses operating with wild and false allegations of drugs and criminality. Well if they don’t aid your business profits, find a way. Next leader of the free world?

Brexit campaign …. on, the political attempts on both sides becoming more creative and fanciful, and with Europe in the grip of German and ECB infighting not to mention economic gloom, for the Brits it may be doom now, or doom later. Either way the European Union is threatened further by the possibility of the UK leaving  as right wing factions gain ground in France, Spain and as we have seen Austria.

Gloom and doom does not mean we will not be able to find opportunity,  we just need to know where to look for it. A survey from Merrill Lynch during the week suggests we should prepare for a ‘summer of shocks’. It looks as if the market is gearing up for just that.