You Better Watch Out!

Santa Claus may well be coming to town in three weeks but not before Mr.Drahi who hits the scene as soon as Thursday with his much anticipated monetary policy decision and another twelve eclectic individuals closing in on Austria’s Friday Opec meeting with their vested oil interests, a crushed price and a growing supply to ponder. The news of a stock rout fresh from Shanghai at the close of last week’s business no doubt will add to the uncertainty especially after another set of gloomy data.

The coming week is pivotal and unprecedented in terms of the gravity of the decisions to be made. We can expect or should at least be prepared for extreme volatility. And if that was not enough, it also happens to be NFP week. If we tread carefully the catalysts could provide some very profitable opportunities but it will be essential to be aware of the news flow and keep the big picture in mind.

Last week’s PMI data for the two majors of the Eurozone wasn’t bad…it wasn’t good either as we see the French hovering near 50, Germany is faring better slightly beating the estimate with 52.6 but we all are aware of the headwinds for this manufacturing-weighted economy. The Italian’s disappointed in retail sales with a minus number, Germany shows a 0.3%  final GDP which won’t set the Rhine on fire, especially with import prices dropping, and the French consumer spending is falling…another minus number.

Add to that the mid-week financial stability report which increased the risk of effects from ‘global instability’ to ‘medium’ whatever that may mean and Mr. Draghi indeed has a problem. We should remind ourselves that inflation has been under 1% for two years now and whilst there is a growing feeling that QE simply has not done the job the effort has to continue. He may well have other measure up his economic sleeve but the tools are running out.

There is a liquidity issue as well and that may lead the ECB up the Japanese path of buying different asset classes as well as bonds. It remains to be seen what will be delivered on Thursday but the consensus is for moves to be made since the consequence of no action after all the rhetoric and promises will have a huge impact on the market and the thing Draghi is most keen to prevent is a strengthening Euro.

One other piece of news came from the ECB this week as they decided to suspend QE over Christmas. The small print explains that as a result bond buying will be stepped up leading up to it.

With the major risk events ahead and risk factors growing in number as disappointing global data, supply issues, and equity wobbles continue to challenge the market’s nerve, the monitoring of sentiment will as always be the first consideration. So what is on the fear list this week?

The week didn’t get off to a strong start with government spending surpassing the budget and the unofficial Industrial PMI at 42.4. This is the Minxin index and is made of of 4000 smaller sized companies;

MNI business sentiment came out at a five year low. As far as manufacturing is concerned it is hard to see how 6.5% growth can be maintained but officially that is the annual target every year until 2020. The service side is showing improvement but for the global economy it is the industrial sector that counts. Industrial profits have actually fallen 4.6% in one year. Gloomy indeed.

The 5% equity fall was due, in fact, to a brokerage probe.The negativity spread to Hong Kong and Japan if not quite so dramatically.

With the data from China showing the serious drop in industrial growth there is little surprise that commodities continue to hit lows. The so-called supercycle of 10 years may be slumping for some time to come, NAB Private Wealth Advisory are saying over supply could see a two to three year stagnation whilst Bloomberg quipped ‘if China killed the commodity super-cycle, The Fed is about to bury it’. On that note, the USD hit the March highs and further threaten global recovery and current debt levels.

The focus of attention, apart from oil, has been in the copper and iron ore market as this so easily impacts other economies, all the emerging markets and of course Australia.  Mining industries in this sector have invested heavily in infrastructure and operational costs. Iron Ore has fallen close to half its value from $80 per metric dry ton in October 2014 to $44. With an anticipated 145 million tons to come to the market in new supply, the 40 level and below is expected.

For copper, it is a similar story, halving its value from the beginning of 2012 having fallen from a high of  460 the year before, currently at 205.75. Here is what the last five years looks like;

Particularly important this week as we head towards the Opec meeting. For a while last week the tensions in the Middle east and the downing of the Russian plane by Turkey near the Syrian border brought a rally in crude prices but one which was short lived as the possibility of reprisals faded and focus returned to the supply issues;

Friday’s outcome cannot be predicted as the chart sits in a technically important place once again. Time will tell if vested interests protecting market share, which includes the now ‘freed-up’ Iran who incidentally own the worlds biggest reserves, will give way to global concerns and the dual pressure on crude prices of over supply and a strengthening US Dollar.

Following the slide in the Shanghai, the S&P our US benchmark index, did fall from the week’s highs but still not convincing as a bullish scenario;

The weekly has a more interesting technical revelation; 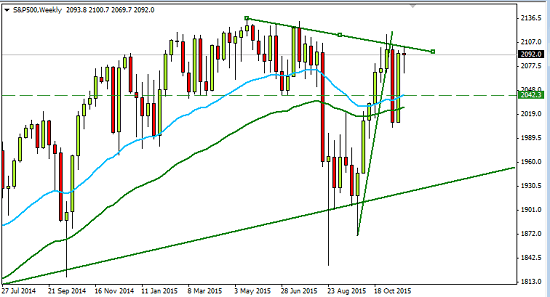 This has a lot to do with the risk climate and if we are seeking signs of fear in the market, this is the first place to look. 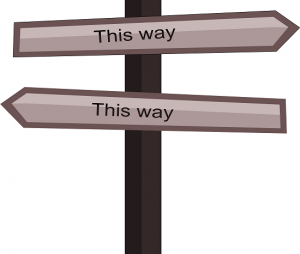 I think a naughty list without Dr. Carney would be an oversight! Once again a balanced view, otherwise known as a two way bet! In his own words…

”it is a pretty unforgiving environment . Growth has been weak for some time and in the last year or so growth in emerging markets has started to weaken further…..but on the other side of that is the fact that the UK economy is one of the strongest of the advanced economies and we continue to see strong domestic demand and households spending money because real income are growing’’

Interpretation: Inflation is weak and Dr. Carney is in no hurry. He will wait to see how the ECB and the US divergence plays out.

Watch Out! The Week Ahead

Thursday;  The ECB decision and press conference. More from Yellen.

I am watching the GBPUSD this week on the short side as it breaks to the downside of the daily channel, , with the EURGBP and EURNZD for shorts until Wednesday evening , also the AUDNZD after the Aussie decision for longs The USDSGD is still on the long list.. I am also looking for signs of risk aversion for JPY trades and short equity positions especially the S & P. It is a week to stay very aware of what is going on and the sentiment surrounding it and to be very disciplined with position size and risk management.

This is a massive week of news and potential catalysts and volatility, none of which should be anticipated. It should also be noted that in the inter-connected market place one catalyst can easily spill over or be rescinded by another on such a week as this. This may just be the perfect time for a little Christmas shopping after Wednesday evening. For once it may well be the less stressful option!