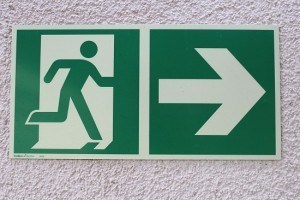 We are all aware of just how difficult the current environment is to trade especially if you prefer the long trends and bigger time frames. It is what it is. Volatility can be a friend or an enemy but what is essential is to understand what is driving the market in order to increase our probabilities, but also to be aware of the possibility of the black swan, the ‘unexpected’ turn of events that can cause mayhem in the markets and turn our predictions upside down. There are quite a few lurking in the current environment already jangling with nerves. The risk trends are vulnerable to the geopolitical and the political and no more so than the continuing undermining of the European Union with the new threat of Brexit.

First Grexit was staved off now Brexit  will be in focus until late June. If the referendum votes out, the question must be will it be contagious or not? And what does it mean to the Eurozone itself.

Since Cameron waived his Euro deal to the British public calling them to vote to stay in the Union, Brexit has been the topic of conversation and a new and powerful macro theme emerged in the financial markets.  Cameron’s government has splintered with hostile reactions and political repercussions in the making, the great British Pound has been losing value, and a political debate has been stirred that goes far beyond the borders of the United Kingdom.

The European Union is but a name. Fiscal unity is a seemingly impossible dream given the disparities between the north and southern zones. The still recent Grexit debate and its potential danger to the EZ should remind us that there are many other politically motivated groups appearing within the EZ countries waiting in the wings and at every level, including the supporters, we have to acknowledge that they have all developed their own ‘each man for themselves’ approach, now hardly masked.

It is not just fiscal issues and weaknesses that dog the existence of the Eurozone, but an increasingly complex and expanding migrant crisis. Whilst the debate rages in the UK, and there is a long way to go, we should consider that the Eurozone itself faces the biggest danger.

Xits and Pips: The Thin End Of The Wedge

My starting point is always to assess the bigger picture sentiment. Risk-on or risk-off? Now so easily shifted from one direction to another, it requires a constant monitoring. Last week, supported by optimism of oil price rises , or at least stabilisation and much stronger data out of the US economy we saw a move away from risk aversion.

That doesn’t mean it will stay that way. The ‘big three’ continue to dictate the course of short term sentiment, the Oil market, Equities (particularly the S&P500) and the USD. It is already looking more negative as the week starts after a tepid G20.

It does seem we are closer to an Opec and non-opec agreement to freeze prices. If that agreement is reached, and it is still a big if, with Iran and Iraq still on the sidelines, prices will be frozen at January levels. We heard from the Nigerian oil minister over the weekend that we could be looking at $40to $50 dollars a barrel again, but that may be optimistic. Talking up the market will not help in any way and will just promote more volatility. Still, it is a step in the right direction and may provide enough optimism to buoy up risk appetite for a while at least.

Interesting level by the end of the week: 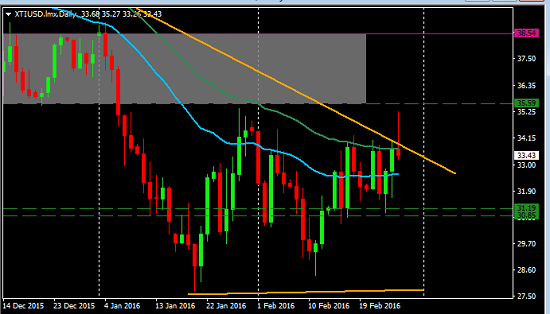 The question of how January’s levels will reduce supply sufficiently to impact the price is one thing. It is quite another to expect demand to suddenly correct itself and indeed it is there that a great deal more time and the beginnings of some sort of global growth are needed to make any significant changes.  None are obvious yet and none seen in the thie weekend’s rather concerned G20 membership.

Not surprisingly, global equities and the particularly the S&P 500 have followed the Oil lead, but as we have frequently discussed here Equity markets have their own inherent weaknesses that makes them more vulnerable to down moves which can trigger more aversion. 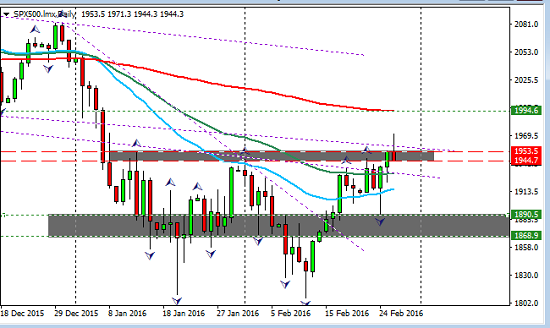 The financial sector has been the weakest in terms of recent results. Threatened by both negative rates which have caused heavy losses and by the damaged energy sector, failing smaller enterprises and defaults on loans, Profit in the S&P companies fell 3.5% in the last quarter and forecasts have been slashed in this quarter.

This is a weekly view of the FTSE world index for the purposes of a year on year comparison: 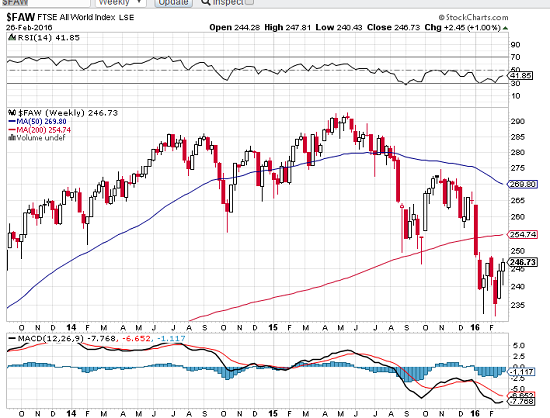 This has been an better week and fir the S&P some pullbacks in the positive direction even with the move down into the close, no doubt digesting the implications of Fed hike possibilities coming back into play,  but we have to watch the upcoming resistance area and any further signs of weakening resilience.

Finally some good positive data to give the fed some justification for the rate hike outlook. GDP  came in at 1% soundly beating the estimate, core durable goods also beat the number and PCE which was shown last week as a comparison to CPI, came in at 0.3% and another positive. There is non farm data this week so any follow through in strength will re-establish the monetary policy divergence between the US and the rest of the global economies. The USDX enjoyed the news 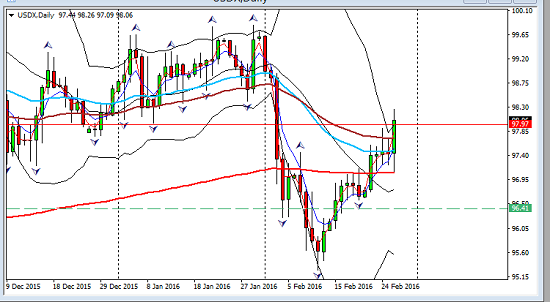 Even the Fed Funds rate is now showing the gap between their expectation and Fed policy is narrowing.

The Dollars ‘punishment’ mostly in January, came from the disappointment in data the growing concerns of global weakness undermining their fragile growth and the fear of the FOMC having to back track. With renewed hope on this week’s data the perspectives have changed.

Normally,In risk averse conditions the USD is regarded as a safe haven but in the recent bouts of risk-off it has actually lost ground. This was more about the drift in policy from expectations and the fact that the USD had rallied for some time on the back of its monetary policy. It is still a safe haven. If data continues to improve this puts the USD in a very positive light. In risk-on conditions it will benefit from recent signs of growth and improved data and from the divergence. In a risk off environment, and we cannot and should not underestimate how quickly that could re grip the sentiment, the greenback may well now start to benefit as a safe haven. Should the going get really tough it is the ultimate liquid currency and the safest.

Short term the USD looks like an attractive long.

Not a plain sailing week by any means and plenty to keep us alert. That means there will be the provision of possible catalysts for some nice moves, but always wary as we now are of volatility.

The big news starts Tuesday with the RBA rate statement and Aussie building approvals. In the EZ, Spanish PMI and German unemployment stats. GBP has manufacturing PMI, Canadian GDP and dairy prices in New Zealand. Another major piece of data is the US ISM PMI. This is crucial to the continuing upbeat outlook for the Fed.

Thursday, AUD trade balance GBP services PMI (probably the most important of the three PMIs) US ISM services is also important to watch.

Friday will bring Aussie retail sales, CAD trade balance and of course the major non farm numbers with unemployment stats. That can always cause fireworks!!

This is a big week for the Australian economy and for the USD. There are some interesting charts, including the AUDUSD with some areas of congestion waiting for break out and this is a week that can produce them. The AUDNZD also has some potential and bias here is to the long side.

The Euro continues to offer shorts provided risk remains on.  The EURUSD shorts are attractive on divergence of policy and Euro weakness and US strength all subject to ongoing data and the risk trends.

The Euro suffered again with negative data last week, with a slew of PMIs missing targets, some under the 50 barrier and disappointing CPI’s showing resistance to inflation and confidence dwindling even in Germany. The German Bund yield reflects the weakness, chart courtesy of stockcharts.com: 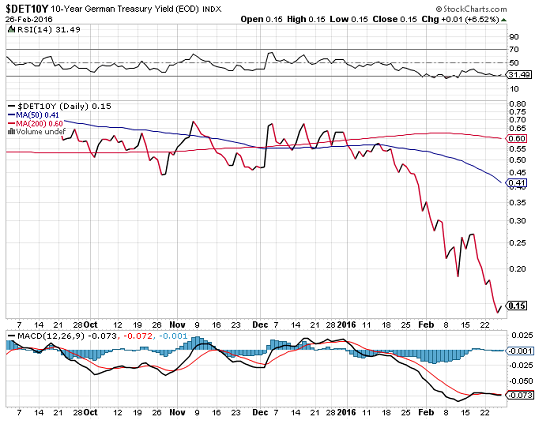 The EURAUD will be on the short list this week and the NZDUSD . The JPY will be on hold until we see aversion reinstate itself.

The macro themes continue to haunt sentiment and whilst we can and should take advantage of any optimism we should always factor in the ability of the market towards confidence collapse. One only needs to review the downbeat views of the G20 meeting to realise how concerned the global economies are about the lack of inflation and growth. There are divided opinions about the effectiveness and appropriateness of QE extending further and negative rates and growing voices that more is required than throwing money at the slim chance of establishing a sustainable recovery.Either way it was clear that there is no clear direction from them on how to deal with the issues.

Beside all that the world waits to see if the Brits will become the first exit from a rather unimpressive and frankly doomed union. And if they do what to follow, Frexit, Spanxit? (I could go on!)

With both the Union (the EU) and the Eurozone it looks to be more a question of how long it will, rather than whether it can survive, let alone thrive. All that has implications on global growth and thus risk trends. Long term trends cannot be predicted. Knowing our environment and which signs to watch for its shifts, will be a key in our plans and in our search for pips from high probability trades, however short term they now have to be.