W.T.F. (Watch The Fundamentals, Of Course!)

One of the tweets I read on Friday following the drama the day before, and from a reputable analyst and author, John Netto, said that ‘Market Historians will come to know 2015 as the year of ‘’Misinterpretation of Central Banks’  As the post Draghi autopsy continues, we might even say ‘misrepresentation’ as well, after all, the markets were convinced by Mr. Draghi’s rhetoric and his ‘do what it takes’ approach with no apparent warning signs.

If Marc Carney is the unreliable boyfriend, Draghi just became the cheating spouse and clearly has some ‘persuasive’ relationships of his own to deal with. Certainly an issue for the market , already handling gross distortions is the rapidly developing sense of mistrust. Makes you wonder who knows what about whom.

With the US turning in the last major piece of labour data ahead of their much anticipated FOMC meeting. it seems the  commencement of the rate tightening process has become just a smidgen less than a certainty. Subject to another Draghi style shock of course. The FOMC does however have a  better track record for communication, the NFP will bolster the expectations, what happens after that in terms of pace remains questionable. Wage growth stubbornly refuses to show improvement, the number of those abandoning attempts to find work is swelling and involuntary part timers are increasing in number.

So it is not all rosy and with the expectation of further strengthening in the USD the Fed may not get very far through the cycle before they have to stop.   It looks as if the important issue will be the future projections, how gradual that may be and that will continue to fluctuate.

We were all aware just how unprecedented the week’s risk event list was but even the pro’s , especially the pros, were not ready for what happened in Europe. The move in the currency was 3% and was in fact, the second biggest move in the history of the Euro;

Not only that, only once have the gains against the USD been higher and that was when the Fed introduced QE

It was only a short while ago that ECB member Praet, warned of diminishing credibility if a grip on inflation is not gained soon. With Opec refusing to prop up oil, that may just have got a whole lot harder to do. Problem is, if Draghi promises more next time, who will believe him? That leaves the market place with a massive additional dose of uncertainty.

It is quite clear that Germany opposed the easing and that Draghi lost the debate and comments even suggest the German contingent did not want any cut in the rate. They seem to think inflation is lurking but with oil depressed and hovering dangerously close to the lower $40 level, it may have turn out to be a regrettable stance, dependent as they are on the manufacturing sector.

Back in the USA under Bernanke’s watch he famously said that Monetary Policy is 98% communication and 2% action. So something went wrong, either by way of a misleading attempt to weaken the Euro by its central bank, or the ECB underestimating both the effect of the rhetoric and the apparent flip-flop. If the former was the intention the action quickly reversed the effect and we should not lose sight of the absolute necessity for the Eurozone to keep the Euro cheap if it is ever to find an inflationary path.

We are left to ponder whether it was ECB hype, or market ‘irrational exuberance’ that finally gave the shock. Needless to say, whatever caused it the seeds of mistrust have been sown, if they were not there already.

The USD index fell sharply on the news, commodities benefited, as did the emerging markets taking a welcome relief from the pressure of the strengthening Greenback.

The underlying truth should cause us to pause and consider the fact that the ECB just cut rates and provided liquidity to the tune of 680 billion Euros, by way of re-investing proceeds of bond purchases. As it was announced the market just simply kept on pushing the Euro up so either it was missed, not considered important or most likely, indicated just how extensively leveraged the fx market was, what some call ‘crowded trades’. It was a momentous day, and in the objective sense an amazing reaction to a rate CUT.

News from the other major event of the week, the meeting of the Opec members in Austria, arrived to a still shocked market place on Friday afternoon. But this one came as no big surprise. The Saudis were not prepared to lower production to support the ailing price of crude. Iran factored into the decision as well, with absolutely no intention of making any compromises until their supply is back to pre-sanction levels. Another dimension to this is, that even if Opec do agree to cut there is no enforcement procedure against individual member countries. Crude on the weekly chart threatening the support; 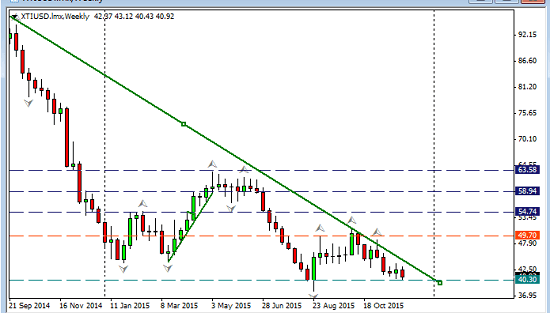 The glut is set to continue to increase.

Commodities today fell further outside the consolidation of the lows; 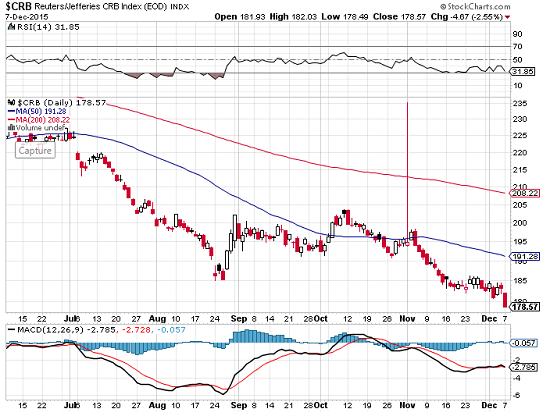 and Iron ore price for Chinese delivery fell below $40 for the first time since 2009.

The third major global  macro theme and developing into its own wild card is China. GDP is struggling to prevent shrinkage, and the outlook is less than cheery with PMI’s last week met expectations but languishing beneath the all important 50 level. The Eurozone more than ever now, need the growth levels to be at least maintained and the obvious tool for the Chinese is rate cuts of their own. With the US likely to forge ahead the pressure increases. Opec clearly are not going to help turn the commodity market around and we have to question the possibility of another leg down in both.

Risk-on or risk-off?. The vix headed up on Thursday as signs of fear appeared, only to retreat the next day as NFP brought renewed confidence in the Fed rate hike. The S&P 500, did the same selling off strongly Thursday and paring the best part of the two previous days losses. Seen on the weekly, however, it looks like uncertainty was kicking in, and on a strong weekly trendline; 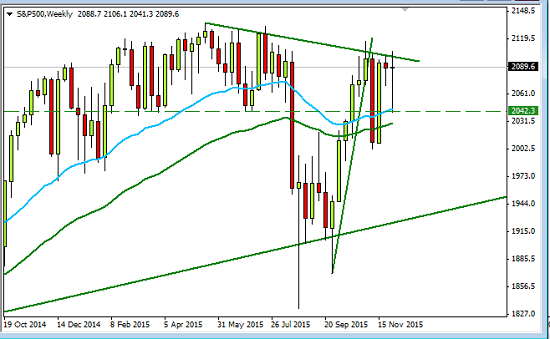 Keeping an eye on the longer term helps us to stay aware of the growing indecision in the market and the sense of confusion that could easily play out as a sentiment shift.

Whilst ‘marvelling’ at the market reaction, obviously still hanging on every central bank word offered, we should not lose sight of precarious and astonishing global debt levels. The BIS, (Bank For International Settlements) last week described the state of markets as an ‘uneasy calm’ and warned of a US rate hike exposing ‘fragilities’ , especially and as we have frequently discussed here, in the emerging markets. US dollar denominated debt currently stands at $10 trillion, almost a third of that is in the emerging markets.

Watching Fundamentals; The Week Ahead

Monday will hear from Carney and Kuroda, Tuesday, BOC’s Poloz There are no fewer than three rates decisions, New Zealand, Wednesday,  The Swiss, and the BOE Thursday  Friday will bring LTRO’s from the ECB and core retail from the US, another. inflation number. China will announce trade balance Tuesday, CPI Wednesday and Industrial production onSaturday so plenty to watch from them.

The USD index fell all week, shown here on the weekly perspective, it actually continued to fall despite the NFP data; (just as the Sand P advanced on the same news) 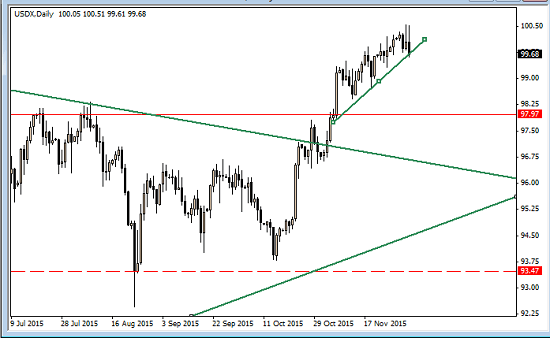 Obviously this current channel will need to be watched on opening and the first day of the week. The fundamentals have not changed so opportunities will be on pullbacks in the greenback, I still prefer the emerging sector and USDSGD in particular. This is consolidating on a weekly support area. The AUDNZD is doing the same but we have to wait here for the NZD rates decision. The market was anticipating a rate cut here but the ECB decision may have changed the outcome. Its an attractive long should they cut or even are dovish in their tone. The EURUSD will also be on the short list when the dust has settled. The Yen trades should be watched for long opportunities subject to the way sentiment settles at the beginning of the week.

With the risk environment in the balance, and less liquidity than desired from the ECB and possible tightening form the Fed , opportunities again lie in the short S&P positions. .

Best not to expect anything in the first few sessions. Let the chaos subside and as always be aware of sentiment from the outset of the week and the thin volumes that will exaggerate moves. There are only two trading weeks before Christmas holidays so the volumes will decrease further  from here. The FOMC throw some uncertainty in on the 17th and there is a sense of nervousness and unease even as the search for yield continues. Play safe and keep risk under tight management; the choppiness is not over.