Monetary policy divergence has been the developing theme of the last week, with a much more than expected hawkish Fed mid week, and no easing from either the RBNZ or the BOJ, it was a very different week to the one that preceded it. The ECB, already with negative rates are heading towards more easing with a view to QE extension although the EZ did manage to produce some improved data at the weeks end, but in true Halloween tradition, there is plenty to spook the market in  general and Mr. Draghi in particular. We will take a look at Dr. Carney’s big week and what we can expect in the run up to Christmas.

With four Central Banks in Europe toying with negative deposit rates an the effects of QE not proving a positive on inflation, one has to wonder what is left to the ECB particularly to keep the Euro cheap. The three others are the Swedish, the Swiss and the Danish.

The philosophy behind the policy is to make deposits by banks expensive in the hope that they will lend it into the economy (non financial corporations) where it can work its stimulus magic. But it hasn’t happened as planned, which leaves a problem.

Another chilling statistic is found in the the 2 yr German Bund with it’s negative rate at  and then there is the German 10 yr yield which hit 0.45 earlier this week. That suggests that inflation at 2% in 2 years is a pipe dream; 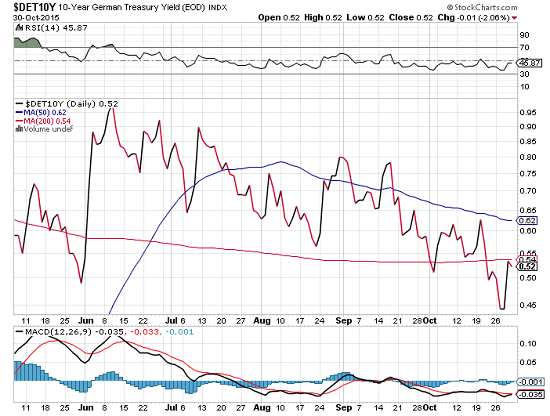 It is true that inflation edged up to 0.00%  which a plus even if a subdued one (how can we get excited by zero?) but again it was core inflation that improved leaving energy prices weighing on the numbers.

Will Mr. Draghi follow through? Has he still got the tools to make an impact? The one ‘known’ is his determination to stop the Euro drifting higher.

Tricky Pips: A game of Cat and Mouse

It seems the hawks and doves are playing a new game in the US. The Fed held rates exactly as the market anticipated but the rhetoric leant to the hawkish side and once again surprised the watchers instilling some new strength in the USD. It was short lived as the index below shows.

The weekly candlestick pattern indicates the indecision as to future projections for the USD. It also sits below an important area of resistance that may take more than language and mediocre data to break through.

Despite the Fed’s hawkish tones, the USD index lost ground towards the end of the week.  Of course the upcoming NFP has the potential  to break the resistance but with any USD trade to the long side, monitoring the index will be key. 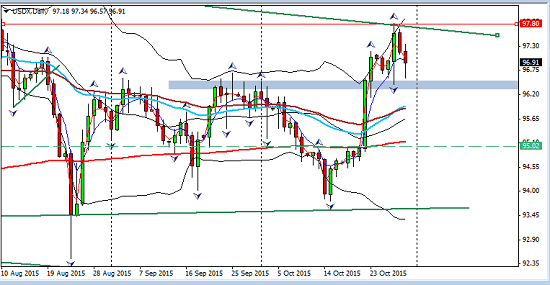 The US data was not as convincing as the statement. Core durable goods missed by a margin, and GDP by a whisper at 1.5%

Be that as it may. December rate hike is still on the FOMC table even if the market and action in the 10 year TNX reflects the jump in probability; chart courtesy of stockcharts.com 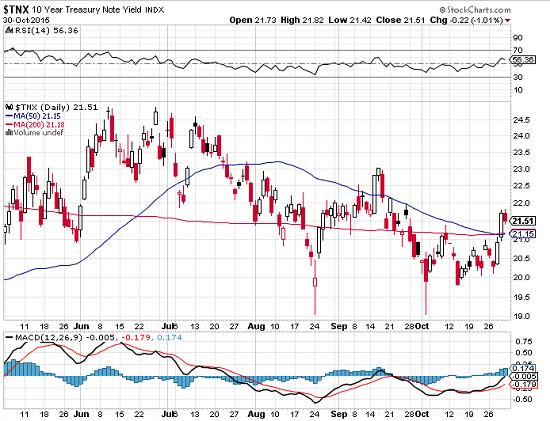 As far as  Non-Farm week is concerned,  the constituent to pay close attention to is average wages as they hold insights into any progress made in inflationary trends.

The Chinese had their own big news this week with the 5th Plenem decision that couples can now have 2 children rather than one, the policy from the seventies. There is no doubt that the previous decision had its affect on demographics but interesting that the government are worried enough about growth to make such a major change. New Zealand liked the news but maybe we should not get too carried away. Too little too late? We will not know for another twenty to twenty five years and by that time economic growth will have been challenged further by an ageing population.

There will continue to be keen focus on Chinese data.

There is a 6.5% growth target from the government , which historically is low, but it is still hard to imagine how it may be achieved especially if we recall last week’s industrial production data.

Tricky Pips; Snakes and Ladders
In the meantime in the UK GDP missed the target but the dissection of the numbers showed services ( a major and growing proportion of UK GDP) to be in good shape. The worry of ths third quarter is Steel production in the country where it all started., and this is in fact not just a British issue but another global one.  As Chinese demand at home diminishes they are exporting large amounts of cheap steel, forcing closures of production plants elsewhere and particularly in the UK. This is yet another example of exporting deflation. The UK have the added problem of higher cost energy than the rest of Europe which factors into the pressures on the producers .

Bloomberg have invented a new game for Dr. Carney of snakes and ladders, journeying as he does through all the events and their (and his), twists and turns …well….we get the picture…

It should be noted that the UK got off to a good start today, with their PMI manufacturing number strongly beating the estmate.

What Carney has to say is important again. No rate change is expected but some predictions as to the timing of the hike may be disclosed. Of course, any lean towards dovishness will undermine the GBP again. The BOE is one of the two more hawkish central banks in a comparative sense in terms of nearness to raising rates, but not without those unpredictable  changes of direction the chairman is known for and offered by risk events globally.

Risk Events and Opportunities Ahead

The diary is loaded!

Next week is PMI week again and a clue giver as it is ahead of GDP in terms of its signals. China is Sunday before market is open, Monday is the Caixin version, and PMI for the UK and ISM PMI for the US. Add to that RBA rates and statement onTuesday , job stats from New Zealand and construction PMI from the UK and the week starts with plenty to watch.

Aussie trade balance and the important retail sales is on Wednesday the same day Draghi speaks again at the ECB forum. . UK services PMI also and in the US, trade balance Yellen testimony and non manufacturing ISM PMI

RBA Stevens will speak in the evening.

Thursday is Dr. Carney’s turn, rate announcement and the all important (often confusing!) language (fasten seat belts again) and concurrently the inflation report which is critical to any outlooks for future policy.  UK manufacturing the same day and the RBA policy statement

On Friday; Canadian employment stats and once again its time for the NON-Farm data from the USD.

I shall be looking for re-entry into the EURUSD for a short, watching for the pullback following the better than expected data last week. For reasons given, it does not really hold enough inflation promise to derail Mr. Draghi’s intentions. Also EURGBP is on the short list but watch out for the Thursday UK event.

The watch for any change in risk trends continues in this strange and sensitive environment. The S and P with its overhead resistance and over-valuations is at the top of the list, but also the Vix, the oil market and of course a close eye on reactions to all the listed event risks in the calendar.

Should the risk environment change the focus will switch to the JPY. The BOJ disappointed the market, or at least surprised them on not being at all dovish,  but not interested in trading any strength in the currency without a shift in sentiment.

Watch out for the weeks snakes and ladders…not to mention the ghoulies and the ghosties!

Hope you had a happy halloween!