Another look at the underlying fundamentals , the market sentiment and where the opportunities may be lurking. It is not an easy market, but as any professional knows there are ways to gain an edge. It begins with understanding the drivers and the global macro environment. With that in mind let us take a look at the week past and what is in store in the week ahead.

A week that saw an exuberant risk-on advance in global equities, emerging markets oil and commodity currencies. Irrational it may be, but we are not here to fight the market. It is not wise to do so, but is is wise to be aware of the potential twists and turns and understand what lies underneath the moves. It may be nothing where global growth and supply and demand issues are concerned but sentiment is in control and price action is following.

The Pro’e Edge: What Lies Beneath?

Prince ‘Everything’, as dubbed by Bloomberg, Mohammed Bin Salmen is shaking up his kingdom. A Saudi Arabian Prince and heir, a politician and a lawyer, alone he was responsible for the Doha failure last week insisting on Iran’s capitulation on production freeze, which was not about to happen. He is now busy restructuring with a view to his goal…’ we do not care is oil prices go up or down’. That’s a powerful position, and underneath his public affirmation that he does not want a dispute with Iran that could spiral into war, he is not only ready but many believe provoking his neighbours.

George Soros too this week has been looking beneath the headlines. China with its debt filled growth, Putin with his oblique plans to flood Europe with migrants, and his views of the dangers of European collapse. He is not alone.

Finally, this week Mr Obama, in a thinly disguised attempt to blackmail the British electorate in supporting the UK remain campaign, is no doubt more concerned with his geopolitical agenda. The economic arguments may or may not support his view but his efforts could back fire. If the Brits do exit, the EU is even more precarious than Soros is currently warning.

There is more than one weak link in the global economic chain, worrying when only one is sufficient to undermine a vulnerable outlook.

In the past month China has lent 1.37 trillion Yuan, about 2.11 billion dollars. Mind boggling amounts in 30 days. The credit is necessary, at least this is implied, to stem the decline in Chinese growth. In that context recent and slightly improved data, reliable or not, doesn’t look so rosy. As Soros points out, corporate debt is now 160% of GDP. You need to lie down to absorb that kind of data and to believe that the market is hyped by the ‘improvements’ !

The truth is Chinese equities have fallen 3.9% In the past week, the largest decline since January’s 6% . 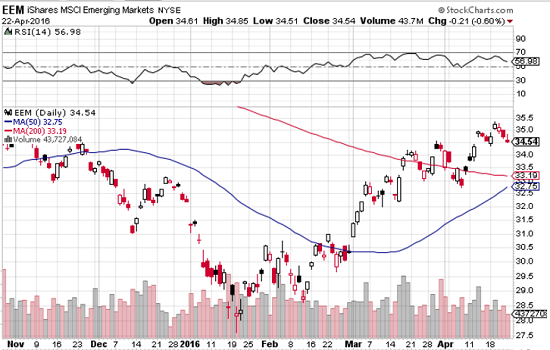 Despite, or may be because of Prince Everything and his vision for the Kingdom to be published in glorious technicolor detail tomorrow, the consequence of the Doha failure is likely to be increased pumping on a country by country basis for those with the potential. The supply issue is not likely to see improvement any time soon. There is another Opec meeting in June that could change the scenery but geopolitics is not lending any optimism although rhetoric and speculation will continue. Meanwhile the likes of Brazil, Venezuela, Nigeria, Norway without the Saudi money and alternatives will continue to feel the pain.

Mr Draghi spoke last week of the risk to the Euro zone recovery and warning again that inflation attempts could still fail and that the economy overall continued to be sluggish. Therein lay his attempt to defend the ECB against German criticism of loose policy, which was enhanced by his comment that ‘we obey the law not the politicians’. Oh that we all did! The political antagonism between the Italian chairman and the German government grows ever deeper supporting the Soros viewpoint.

The debate rages on. The public are clearly confused by the politics of fear on both sides. It isn’t helping. The truth is that whatever the future prospects, a Brexit would cause immediate economic difficulties and arguably more so for Europe than in the UK. That can weaken the Euro as well as the GBP as we head towards decision day. Be that as it may, Brits do not like blackmail and are growing evermore wary of politicians on either side. It will be a close run race and in all likelihood a close call. The uncertainty is guaranteed.

The FOMC step up to the plate again this week. The 10-year treasury yield is ticking up but we have more to come from both the Fed and the market reaction as to whether they will raise rates this year and if so once or twice? 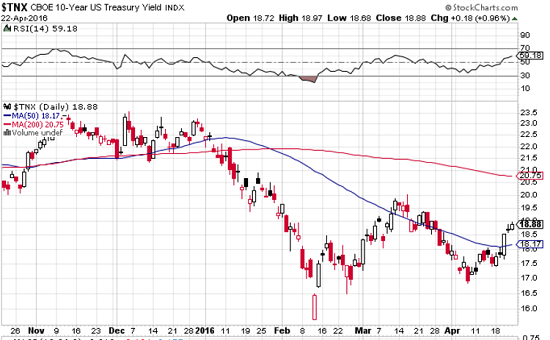 Recent data has been mixed so with the FOMC on Wednesday and first quarter GDP on Thursday we have some catalysts to work with. They can also help or hinder sentiment so essential risk events.

The Pro’s Edge: The Week Ahead

It is a massive news week and plenty in the calendar to invoke reaction and price action.

Noteworthy news begins on Tuesday with US durable and core durable goods and a New Zealand Trade balance.

The real drama begins on Wednesday. Fed day, the FOMC rate and statements and the all-important watch for tone, language and rhetoric from Ms Yellen.

The same day will see UK GDP and AUD CPI, both significant.

Thursday is another big day with the BOJ releasing their statement after all the speculation of further easing and even lower rates further into negative territory. A lot has been priced in so this could be volatile either way. The movement last week in the USDJPY evidenced the speculation: 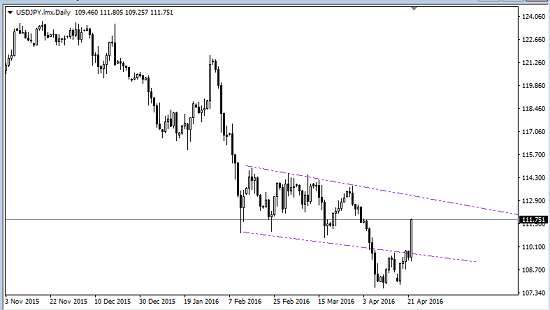 USD GDP is another biggie on the same day and on Friday we will have the CAD GDP. With recent improvements in data from the Canadians, notably core CPI and retail last week, although not impressive numbers they both beat the estimate, this is another area to watch. Again the CAD has benefited from the oil hype and the GDP will impact either way.

It is of course now more than ever necessary to prepare for different scenarios and not to make assumptions. One always has a bias depending on your personal assessment of all the factors, With that in mind, and with the calender and the FOMC particularly in mind, the EURUSD has short potential 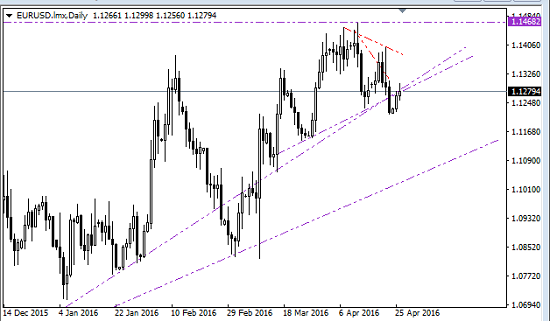 The USDCAD long potential preferred but with the FOMC potentially providing a break out the range either side. This one requires a watch of the crude market as well as the USA: 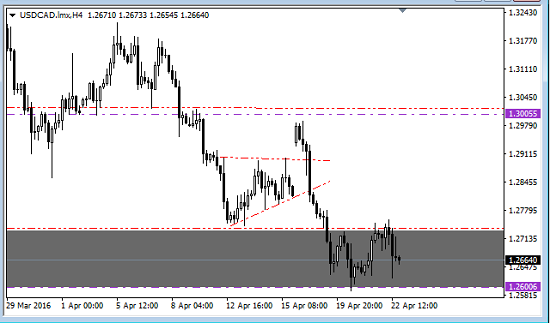 The GBPUSD broke a triangle and on a monthly high, short potential dependent on FOMC and a mature pattern 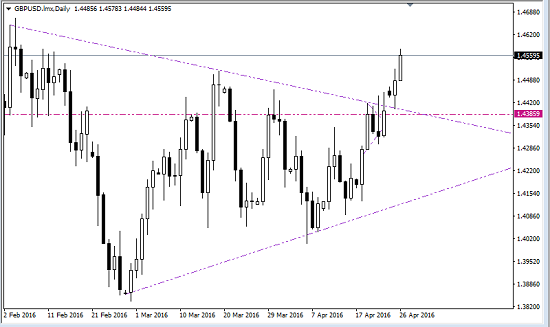 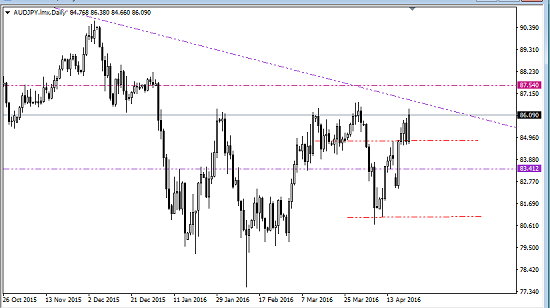 I am watching for negative patterns in the equities, the DAX and EUROSTOXX50  with bias still down. The S&P500obviously is on watch for elements of risk environment and inherent weaknesses that could offer shorting opportunities. 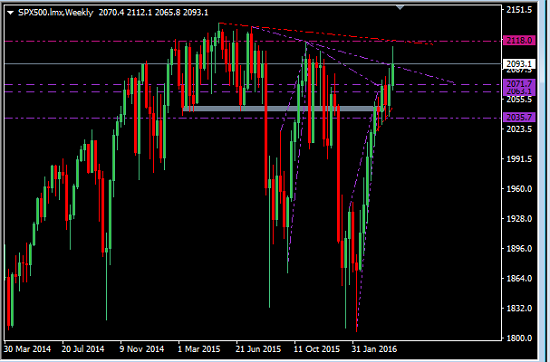 The USD index is also always under surveillance and here on a 4 hour chart an area to watch as this weeks US news unfolds. 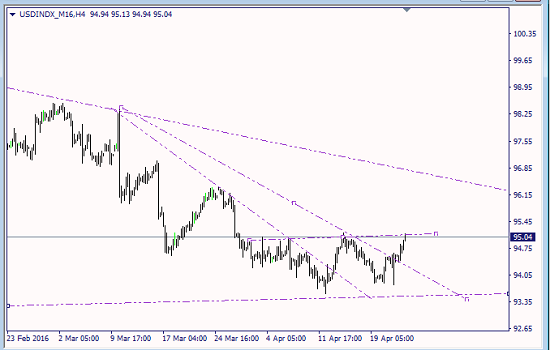 Oil as we know, even if we don’t fully understand why, has been on the rampage since last Sunday. Shown here tackling a weekly level on Friday’s close. 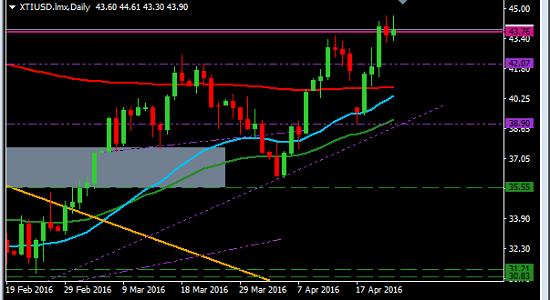 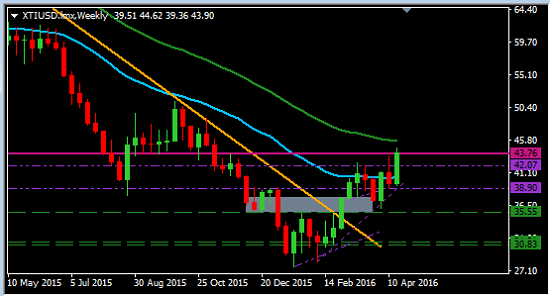 This needs a good range to develop to make shorts interesting but the bias on the fundamentals remains down.

There is certainly plenty to provide opportunity this week. If we are risk-on then we have to trade accordingly but not without alertness to potential and possibly violent shifts in sentiment. Risk control is always a must for successful profitable trading but never more so than in the current uncertain and confused environment. Last week I mentioned fifth wave behaviour. Risk-on environments with no apparent underlying fundamental causation and a growing number of political and geopolitical disturbances developing and existing out of immediate sight are the stuff of final summits. If and when the risk appetite dries up, we know what to do.