Recent trading has brought volatility and choppiness to the markets, and then last week post the US disappointments in the jobs data it all got much calmer. Profits were made longing the commodity currencies and shorting the Euro amongst other opportunities. These decisions were derived from an understanding the fundamentals that were driving the market. The conditions this week have provided for a more choppy and uncertain environment so let us take a close look at what we can look for to find profitable positions.

One week after NFP data was released in the US and can see how one piece of the US economic puzzle shifted the market sentiment. We saw the fear ooze out of the markets and the risk appetite step up as Equities forged ahead with the S&P seeing a high of seven weeks. The Vix broke back below the 20 average and held, commodities relaxed into a rally taking copper and Gold with them and easing pressure on commodity currencies  and emerging markets alike. Whilst the pushing out further and all likelihood now into next year, of the beginning of the US rate hike cycle, predictably brought equity relief, can it bring a long term sustainable up move and whilst we exploit the potential of a risk-on environment,exactly what should we be looking for in terms of its duration.

.Notably, on the subject of  of global macro themes, another item pushed its way up the leader board during the week and this one has the potential to become a black swan. Mr. Putin upped his efforts in Syria and it involved cruise missiles and since they have to pass through Iran and Iraq their implicit agreement was obvious. His published goal is to control terrorism, his target was rebels more than Isis. His real purpose may be much more serious, an opinion expressed both on CNBC and in the UK Guardian, one of the reputable sources of views and news in the UK, if you get my meaning. Russia’s economy badly needs oil prices to rise, and oil dollars pouring into the Russian coffers will do wonders for Putin’s political cred. A long drawn out affair deep in the Middle East plays into his game plan.

The Profit Puzzle:The Curse Of The Black Gold

The politics behind the oil market is endlessly complex. The Arab nations and indeed all of Opec countries have continued to saturate the market, whether or not it was a targeted effort to push down US supplies, it certainly had that effect as we see now production falling on rig closures. As far as the Syrian effort is concerned once again the US and Russia find themselves, without coincidence, on opposing sides.

The irony is, if Putin succeeds and prices rise, the US fracking market will be back on stream (it is not an expensive operation to re-open and  fracking is one of the cheap methods of crude production). That in itself may peg the upside and limit Putin’s ‘growth’ potential.

The other unknown …and this is key …is whether or not China can hold on to any sort of growth of their own, stem the shrinkage of their economy, for any downside shock from them will take down oil and commodities with them. Its a frail ‘hold’ on the recent crises.

For the present. it is fair to say that as the concerns in China have abated somewhat and the rally in oil not just about the USD coming under pressure, the market has relaxed back into nicely into a risk on environment. However when we step back and consider the meaning of the US delay to tighten, we might pause to consider how long the ebullience may last. After all the message is simple, the efforts to get any inflationary traction are decelerating in the one economy that offered any real hope. Well that and the UK where similar evidence is mounting.

Here are the charts that tell the story at the end of last week of market sentiment;

The Vix has held below 20 but it has edged up again so keep a watch on this: chart courtesy of stockcharts.com;

Bonds fell back raising the yields; 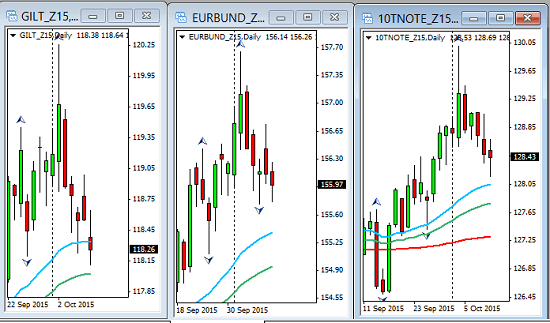 S&P forged ahead but is now facing some resistance, shown here  on the weekly chart;

The USD index dropped as predicted as it had got ahead of itself and sits in a critical technical position, shown here on the weekly perspective; 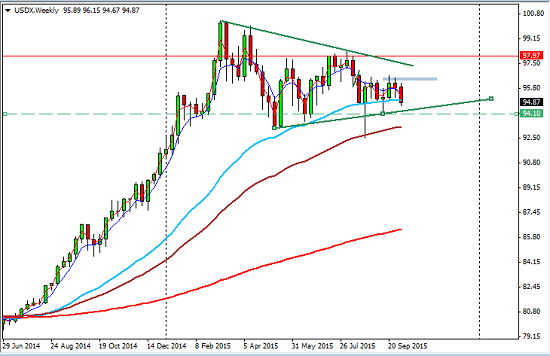 Oil rallied strongly with geopolitics increasing the momentum. Again the weekly sheds more light and a pullback seen already this week;  this one includes this week so far; 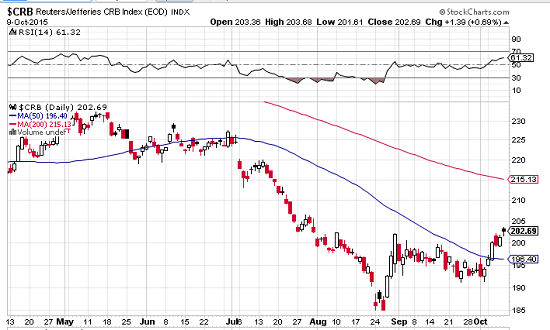 On a fundamental level it should be noted that the FOMC remains accommodative in the on-going effort to target inflation. They are not however expected to expand the balance sheet further. This is very different from the more economically challenged central banks. What also have to remember is that precisely because of this stance in the US that the pressure has now increased on the ECB, and on the BOJ to ease further. The BOJ actually left their policy unchanged this week but there is increasing expectation that soon both banks will have to take steps.

As to the push in Equities, in both the US and European markets there is overhead resistance to take into account. How they behave this week will paint its own picture and in the US we are approaching earnings season. With over-valuations and projected earnings per share dropping leaves us to wonder how far the FOMC decision will help to prop the Equity markets.

Furthermore, many US  companies have already been affected by the crises in China.

In a risk-on environment is may be wiser to look at the weaker economies to short against the commodity set, and that only if the risk environment holds. It is not looking so positive this week. and there will b data that can affect this so be prepared to wait. The US is not per se, a weak economy, it has rather had a set back in its upbeat outlook and the optimism of slow but sure recovery. Now it is not so sure.  The Euro certainly profited from the past weeks weaknesses in the USD, but the outlook is not so optimistic. Inflation as illustrated by CPI is back down to zero so trying to justify 2% within two years is becoming harder to envisage.

Germany, under the Volkswagon scandal, and another country exposed to China, saw exports fall by 5% in August. An improvement in September but an unexpected fall in imports is now the concern. Germany is the ‘leading’ economy in the EZ and certainly bad statistics will put more pressure on Draghi to take further easing steps.

In the EZ inflation forecasts are near levels before QE was started. That is a depressing statistic for those hoping more of the same will put the economy back on track.

The EURUSD offers various shorting opportunities so we wait a set-up.

In the UK Dr. Carney has been in focus again, warning of global ‘headwinds’ but not discounting rate hikes. We know his nick-name but in his defence, reliability is not a word we would use in any of the global central banks. Jaw-boning has become an art form.  The GBP has also priced in a good deal of pessimism, but saw some gloomy news just this morning on inflation as it dipped below zero.

The Week Ahead; Inflation, Inflation Inflation!

Because inflation is the number one priority in the global macro universe we have to sit up and take notice when CPI is in the Calendar, and it is this week;

Monday bank holidays in the US, Canada and Japan.

Wednesday, brings GBP average earnings (another biggy) and employment stats. Retail and core retail and PPI from the US. More inflation data.

Thursday brings US CPI, unemployment and from Australia job numbers. The US also has the Philly fed manufacturing data. Also NZD day for CPI.

Friday brings consumer sentiment from the US and manufacturing sales from Canada.

One other event to watch is the Chinese ‘Plenem’ a major government meeting that will focus on the economy and after the recent crises it is something to monitor.

Plenty of catalysts there. I will be watching the USD index in it is attempt to break lower and how equities will deal with resistance. The Aussie and the Kiwi may have further to go against the greenback but need pullbacks.  The AUDJPY looks like a long unless the risk climate changes. I prefer to leave the GBP alone this week and there is a lot in the diary that could give us more clues and catalysts. I am also waiting for the correction to complete in the USDSGD. We still be looking for technical clues as well as monitoring the dollar sentiment.

Risk-on is still on but less clear and the market is choppy. . Rhetoric and data continue to deliver twists and turns but there are trends to be followed however long they may last. The key is to remember the background and take nothing for granted. This is a new era, where central bank interference is at all time highs and normal economic flows are distorted and simultaneously the effectiveness of monetary policies is in question. That makes for a sensitive market place that cannot take shocks and surprises . It can also cause fast changes in sentiment that can turn round and bite. So while we exploit the risk-on lull we would be wise to stay tuned to that sentiment on a daily basis, ever respecting the potential for climate to change.