What is in the calendar for March can seriously affect your trading plan with the two big meetings ahead, the first on Thursday with the ECB stepping up to the plate…at least the market hopes so, and then the FOMC on 16th. We have seen the appetite for risk return, with a rally in oil and the S&P 500. There are, however some big levels to watch and in the meantime we have to decide what news matters and what does not. There is plenty to chose from!

Statistics may not lie, but interpretations can be both mixed and contradictory. The environment has become more risk oriented as the market has gained confidence in the bounce from such a poor start to the year. Equities have benefited, commodity prices are staging an impressive recovery dominated by optimism in the oil market of both agreement and the hope of higher prices,  In their wake Emerging markets are making a come-back as are junk high yielding bonds.  China, via the People’s Congress which has just completed its annual meeting, has played down the difficulties it faces, promising that there will not be a hard landing and that China will continue to fuel global growth.

There is a lot of rhetoric and promises underpinning the buoyancy seen in the global outlook. But what of the fundamentals and should be concerned about inherent weakness not only in the supply demand ratio that controls the crude market , but the threat of negative rates, which we may well see deepen in the ECB this coming week, of China’s shrinking economy attempting to shift focus from manufacturing to services without causing global waves, of still mixed signals from the US. Add to that the political dramas in the making, the unthinkable possibility of Donald Trump as the next president of the USA and the continuing threat of Brexit and the consequences for the struggling Eurozone? May be the best and only way to proceed is to embrace the optimism and retain the caution.

Risk-on has returned not just in the S&P. Thanks to stabilising oil prices more stimulus expected from the ECB and Japan, Chinese concerns calming and better US data all lead to risk appetite gathering strong momentum into the close as illustrated by the crude market and the S&P 500.

Oil is in fact approaching a weekly level and a daily 200 EMA …something to watch.

But emerging market recovery is now even stronger than the S&P, chart courtesy of stockcharts.com: 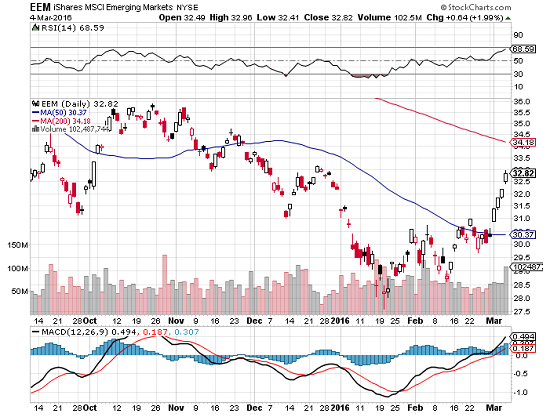 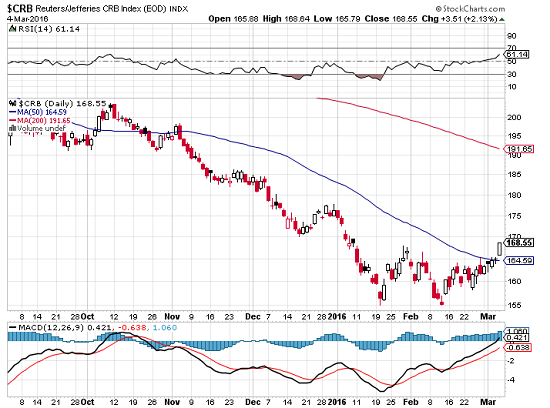 Industrial metals, which reveal Chinese demand are up…which is promising, it is however still a low number and the feeling remains that there is a long way to go: 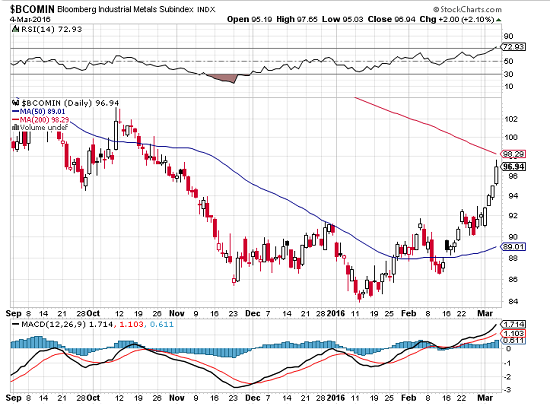 Gold has also benefited, a 20% rise for the year and a 13 month high,  traditionally a risk off performer and recently gaining strength …is this because of the chance of some inflationary traction in the US? Here is a monthly perspective: 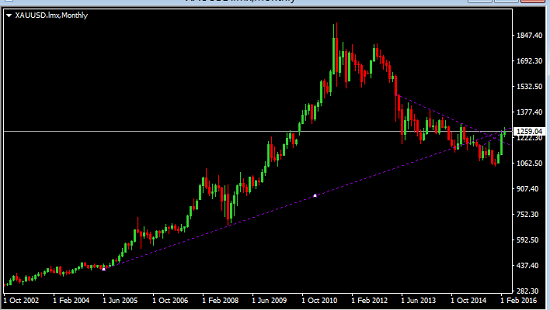 Bonds across the globe sold off, pushing the yields up …here is the German 10 yr note yield …looking better even at 0.24, chart courtesy of stockcharts.com: 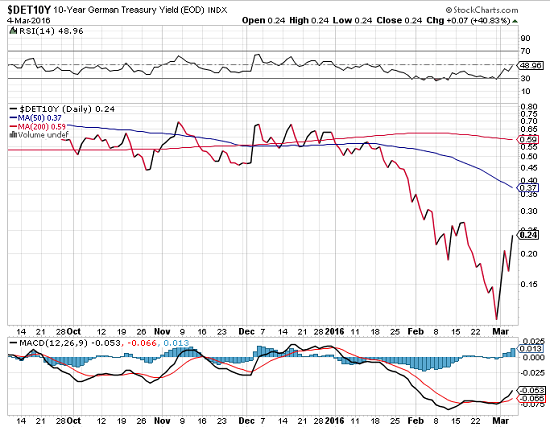 The realities of the crude market is that the fundamentals have not changed. Inventories on Wednesday recorded historic highs in crude stocks but the market ignored them and carried on rallying.

In Saudi Arabia they should be pleased that their policy to slow down US production is working at last. Data this week showed the first down-tick year on year. It is true that the Saudis are hurting from the low prices, but this is what concerns them and they are just beginning to see results.

The opec countries are in it for themselves…a theme we have seen in other areas of the economy, and no more so than in Saudi Arabia. There is no agreement to cut output, only to freeze production at January levels and that is arguably not significant enough for a change in supply levels. The Iranians are still thinking more of boost than freezing. A sustainable rally? Analysts are split but the fundamentals are not yet showing that the rally can hold.

Despite the recent rhetoric, China is struggling with debt and restructure. They can easily rock the global boat…again. Debt to GDP is 250%…yes you read that correctly! Growth targets have been lowered and the trade target abandoned as China moves away from manufacturing and exports to services.

Lat weeks data was a little shadowed by US numbers, but the Chinese Caixin PMI for manufacturing was was a miss at 48. Services PMI is above at 51.2 but missed the expected number. That is not promising for global growth.

Draghi has to deliver on March 10th. As we edge towards the meeting of the ECB on Thursday expectations are higher and increasing. The measures available include more negative rates, extended QE purchases and changes in the current program duration. The question remains as to how effective they may be but Draghi has first to devalue the currency to be in with even a chance of recovery.

The Stats are not good, despite the extensive program already in operation, with PMIs meeting expectations but all lurking close to 50and French services falling below on a missed number. Retail sales for the zone did beat the expectation at 0.4%.

With the reaction to the US (discussed next) the advancement of the Euro on what was at first sight solid progress the other side of the pond, was clearly not what Draghi wants or needs. All eyes this week are on him.

Negative rates continue to cause medium to long term concern, for the financial sector particularly.

The rally continues with European equities in step with the US, here is the DAX daily chartas the week closed: 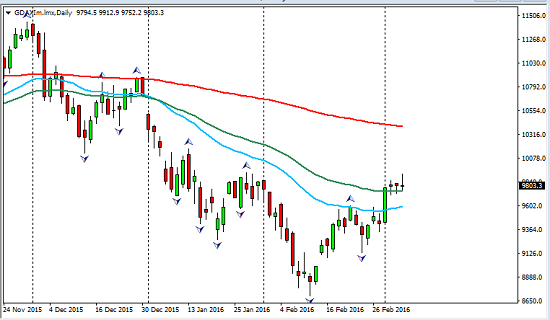 The Equity markets in the EZ may well reap further benefits from ECB policy on Thursday and from the anticipation of it. If Draghi disappoints as he did back in November, watch for a reaction.

As for the US equities, we have looked at their inherent weaknesses. There has to be some follow through in fundamentals for a sustainable rally. Global growth has to be more than oil or commodity hype. 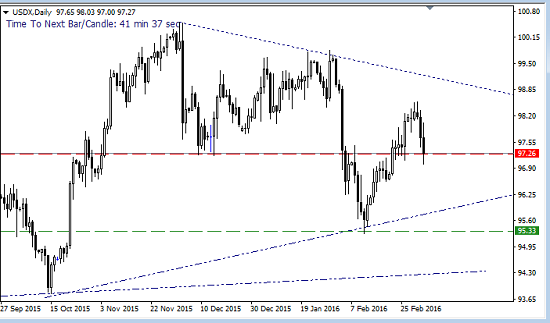 Taking into account the intention of the likes of ECB and BOJ and indeed China to pursue their bias towards easing it is hard to see how the US currency can fall in a sustained way. Monday will no doubt provide some insight.

Suffice it to say that the evidence is there to reinstate the monetary policy divergence theme and the market is now, via fed funds futures looking at a rate hike in December or even November and thus closing the gap with the Fed’s stated intentions.  My quote of the week comes from Joshua Feinman of Deutsche Asset Management, who sees the US recovery on track, the market wrong and the Fed right …”low and slow does not mean zero and no”

Opportunities In The Week Ahead

With our now daily reassessment of sentiment still a necessity, the week presents some strong catalysts…a fair few cats among the pigeons!

Tuesday our friend Dr. Carney has a say

A huge week for monetary policy. Euro weakness is still a theme for the coming week but the pairings will have to be chosen with care. The EURUSD pulled back nicely on Friday and the EURGBP also offers opportunities to short after the meeting. EURAUD is still interesting but needs a healthy pullback. No Euro trades should be open on Thursday as we have a potentially very volatile event!

The USD is at a cross roads, still the favoured side of the divergence theme, I shall be watching the USDX as the week gets underway. With commodity strength and emerging markets enjoying the momentum there may still be some downside.

The AUDNZD is on the long list for any pullbacks and is a pair more immune from the big ECB event. It has a catalyst and therefore a potential opportunity after the RBNZ rate decision.

We can expect a week of positioning on policy and a test of nerves in the Equity markets. Risk assessment is always important and market remains vulnerable to shifts in risk environment until substantive evidence of global growth is established. It has not yet shown itself.

Sometimes patience is called for and once the dust has settled after Draghi declares his intentions we can asses the best probability opportunities from a safer position.