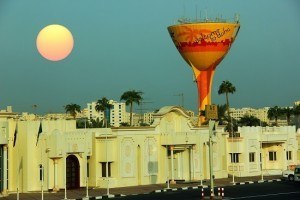 D-day was Sunday as we headed into the Opec /Non opec meeting in Doha. For some, including the writer, the move up in the crude market which preceded it was more about the prospect than the result, which is why we buy rumour and sell fact. The fact here is that there is a strong likelihood that that was the intention of the Russians and the Saudis when this all started. What surprised the pundits was the reaction by the market to the failed meeting.

The breakdown in talks to reach agreement over a freeze on production would surely meet with the expectation of falls in the oil price and in commodities generally?The gaps on open were significant but surprisingly to many they reversed. The commodity currencies are steaming ahead and risk on behaviour back , more or less on full throttle. The question now is, why and should we be concerned and wary of the fresh wave of risk appetite?

Oil production is no doubt adding to the glut and on the bigger picture, it is trending up, certainly where Saudi Arabia is concerned. Add to this the unexpected addition of US crude inventories which rose to 6.6million barrels in data last Wednesday. Many times here is this blog the question has been raised: what if the oil price does rise, does this not mean that the closed rigs will reopen and the whole supply issue repeat to recap any price improvements? These are mostly fracking sites and relatively inexpensive to resume. The other fact to remember is despite closures approximately half of US rigs are still open and producing.

There is a sobering factor to consider in the hype. All participants at the meeting and all producers who did not attend are intent on protecting market share and not one of them will be prepared to lose it to post sanction Iran or to the US.

There are not just doubts lingering over the course of the crude ‘rally’ following Doha. Chinese data came out this week showing improvement in exports among rumours of fake invoicing to Hong Kong and a better than expected GDP. China of course one of our major macro themes and a market driver. Even if we believe the data, GDP growth at 6.7% is still the slowest rate of quarterly growth since 2009.

“Perhaps the subdued market reaction derives not just from a jaundiced eye cast upon the veracity of Chinese economic reports, but also by the sense the figures, even if accurate are not sustainable”

Jaundice in this case could be catching.

This is our third major driver even if temporarily side-lined by the Oil meeting. Focused in the USA, there are still possibilities if a rate hike or maybe two this year, at least as far as FOMC rhetoric would have you believe.

The market think otherwise. Here is the rate in the US10 year still trending down: chart courtesy of stockcharts.com 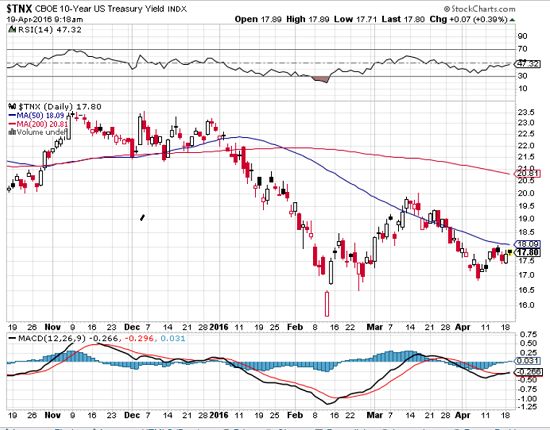 The growing mistrust of monetary policy and trust in central banks, in the case of the USA to follow through and in the case of everyone else that QE measures are simply not working, leaves a lengthening path of uncertainty. The market is alert to the possibility of the Japanese intervening to cheapen the currency, but how? Lower negative rates? More bond buying? Is that even possible?  So do they freeze in the headlights or throw the kitchen sink at it? Either of those scenarios leads to more distrust and more uncertainty. Not a surprise that volatility is creeping back into the currency markets. These past two days have seen the Yen ease back, but this is a chart to watch 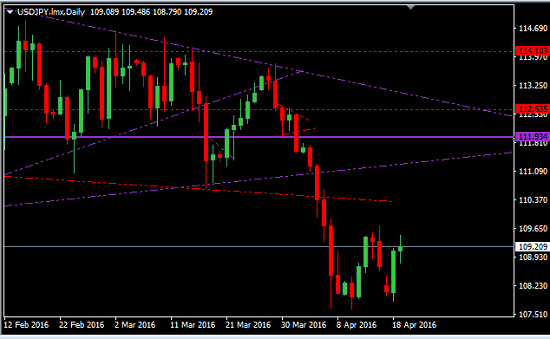 The problem remains that when the central banks all use similar policies the effects are cancelled out. Worse still the yields continue downwards.

Even the rate predicted 10 years out in Germany is perilously close to zero, chart courtesy of Stockcharts.com

As always the calendar holds potential for shifts in either direction for risk themes and sentiment.

The equities gapped down after the meeting but not only recovered but forged ahead, a weekly candle to check Friday: 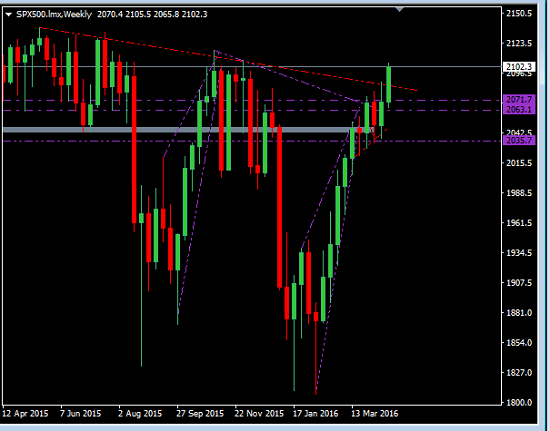 The vulnerabilities, globally continue to threaten them. The S&P500, with earnings issues and corporate profit headwinds, looks toppy…perhaps a fifth wave type behaviour which makes sense on a daily perspective.

In Europe a similar picture of recent buoyancy. The ECB are ahead this week with rates and a statement so we know what to look for, and another equity catalyst lays in wait. Here is the impressive recovery of the DAX from its gap down 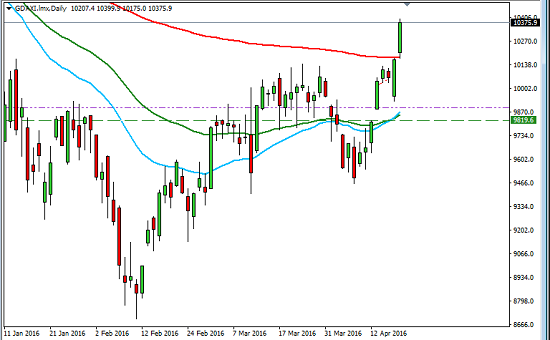 Wednesday, average earnings in the UK is another catalyst for movement, claimant change also from the UK and the weekly crude inventories which all that implies in the wake of Doha.

Thursday, is the ECB rate and statement and UK retail sales. Also the weekly unemployment numbers from the US and a manufacturing statistic. (Philly Fed)

On Friday a round of PMI’s from the EZ and the CAD retail and core retail.

As always we have to prepare for different scenarios. The Euro is vulnerable to the meeting on Thursday but depending on sentiment may offer some opportunities further in the week. The reactions have been unexpected and violent and volatility likely to continue following the swings at the week’s open. Whether you look at the short or long term there is a real need to stay alert in these conditions for behaviour trends and wait for some mature patterns. Risk appetite may be less than it looks and certainly the shorter term view might be more appropriate.

The best we were looking at from Doha early Sunday was a soft agreement that may not actually help a great deal with the global crude supply side, as the  IEA stated “if there is to be a production freeze rather than a cut the impact on physical oil supplies will be limited” . We did not even get that far.

With the words of the IMF  still fresh in our minds we should maintain our caution, Global warnings continue with little in the way of concrete suggestions to fix the issues. Fiscal restructuring on a country by country basis is on the list but is not a quick fix and a difficult task on a synchronized level that would be required, especially in the Euro zone. The lack of upward pressure with less than impressive data from the US and doubts over Chinese data reliability and the fear of stagnation elsewhere remain the clouds gathering above. With an eye on sentiment there is plenty to provide opportunity.