Santa Has Left The Building! 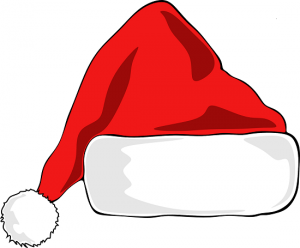 The Santa Claus rally was not exactly impressive. In fact if you had started your holidays at the beginning of Christmas week, or attended the office party you probably missed it. The S and P 500 did break a level and it  promoted a flurry of risk-on behaviour. At least that is what it looked like but we can never tell as the end of the month and the year looms alongside a major holiday it could yet have been short covering and profit taking to pay for all those expensive 5th Avenue gifts.

Be that as it may the crude market joined the party and the commodity index took a welcome break from a year of sliding downhill. In this short review of 2015 we will look at the bottom line…what the FT aptly described as ‘Year Zero’ and what that may mean as we move forward into a new year where free money, at least in the US of A after 8 years is a thing of the recent past. How soon that will be felt in the Wall Street  bull’s extravagant wallets and how long they can hold their nerve will be a subject for monitoring  in the global macro pulse.

2015 was in fact mostly about collapsing commodity and in particular the crude market. The following chart since 150 shows in context just how steep a fall we have witnessed since July 2014 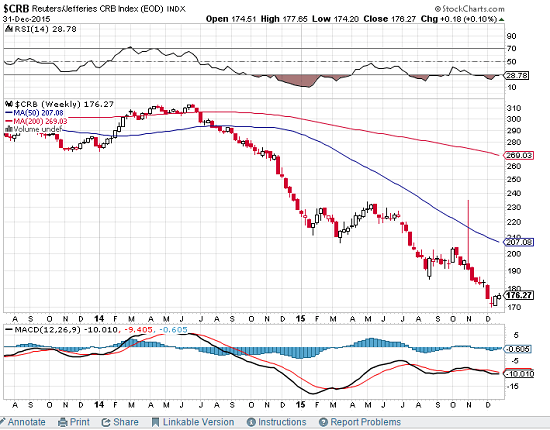 Of course the crude market has had to deal with the stubborn Opec policy to maintain current production with no attempt to veil the intent to crush the US shale producers who were making huge strides towards global market dominance. Saudi Arabia was not about to allow that to develop and so the internal Opec struggle goes on to protect market share and with Iran back on the scene it looks like it is ‘each man for himself’. Goldman have even suggested that we may see $20 per barrel. After their misguidance over the ECB decision you may choose to suspend your belief but it may be wise to be prepared for further falls and the inevitable toll that may take on market sentiment.

The tumble has been precipitated by a glut caused in no small way by the main event of the year. Chinese slow down and the reversal of growth trends hitting hard the south Asia emerging markets and sending out deflationary consequences around the globe. Commodities suffered a similar fate as we have seen in the chart above.

Whilst on the subject of China. the recent upbeat outlook in US growth inherent in the policy decision to tighten rates, doesn’t mean the headwinds are over. There has been plenty of talk of transitory factors and even lower energy prices boosting spending, but the Chinese situation and the management of it by their government does cause continuing concern for global recovery even in the strongest economy. It is a comparative term and Europe and Japan to name but a few continue in their effort to establish inflationary tracks. China uses half of the world’s copper aluminium and steel resources. At least it did. Mining and energy sector companies continue to close and it is a trend unlikely to end soon.

We all know what happened when the ECB ‘disappointed’ the market. Janet Yellen’s timing was such as to subdue any reaction there may have been to FOMC policy and we looked last week at the management of the tightening process. Just how much of the policy divergence has been factored in will show up once the new year gets under way. Certainly Mr. Draghi would prefer a lower valued Euro. Here is the Christmas week action low volume action, still trading in the ‘post Draghi’ upper range: 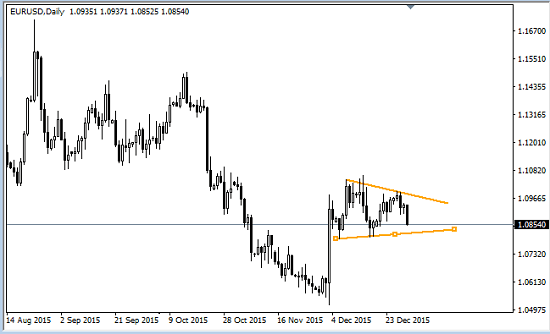 He would also like to see some inroads into inflationary indications but they are not yet convincing and the US decision may well hamper them further. One area to watch will be capital flows. With better rates on offer the other side of the pond there is a growing risk of outflows from the Euro-zone pushing up the cost of borrowing.

The year closed out with a slightly more upbeat outlook from the Bank Of Japan.. Whilst introducing some adjustments short of further easing (analysts described them as ‘tweaks’ and they included extending bond maturities and increasing government purchases of EFT’s)  they presented a contentment with current policy which will continue to inject 80 trillion yen into the economy. That is $660 billion, in a country where the public debt is now twice it’s economy.  Just as the BOJ minutes were released, household spending numbers missed a target and core CPI just made it to the expected number. Still in the all important comparative terms of global strength,  the indicators of growth are improving. GDP expanded in the third quarter and industrial production is increasing.

Kuroda, like Draghi is committed ‘to do what it takes’ and he saw the encouraging signs in a slightly different way as ‘downside risks have not increased’  Well I guess that is a plus in current world circumstances.

What the FT was referring to was the returns posted in 2015 for bond funds , equities and cash. All hovering close to 1% and all less that a percentage point in difference. This has apparently never occurred before. 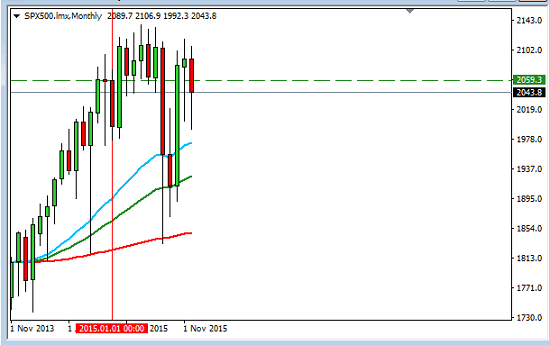 with less than a week to go it may dip beneath the January 2015 opening.

Here is the daily chart with the three day ‘santa’ rally: 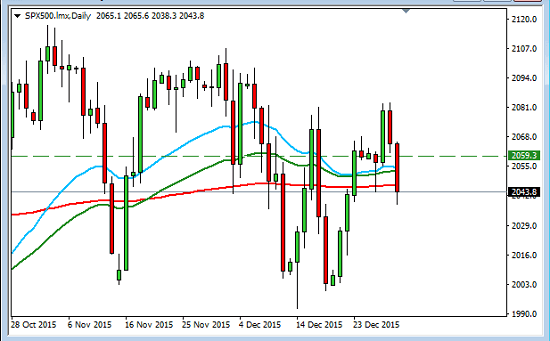 There are vulnerabilities here in terms of market sentiment and the assessment the market will make of both the new US policy and the state of the global economy as a whole. Headwinds will be something that they will assess for themselves and in turn that will determine the risk climate in the first quarter of 2016.

The calendar is quiet this week and volumes thin. A great reason to enjoy the vacation and do no more than research. We know what to look for. The Vix dropped back down as we closed before Christmas day, but take a mental note of the gaps we have recently seen: 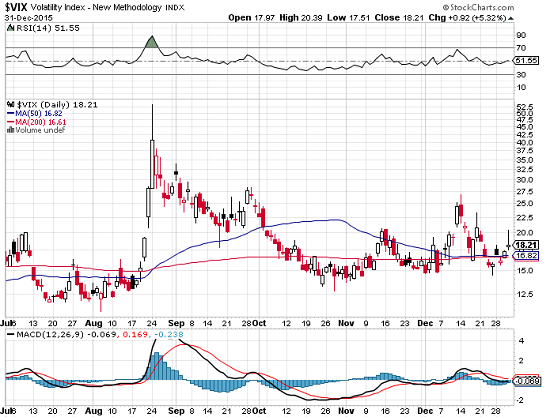 The fear pair will be worth watching as will all yen pairs should negativity raise it’s head: 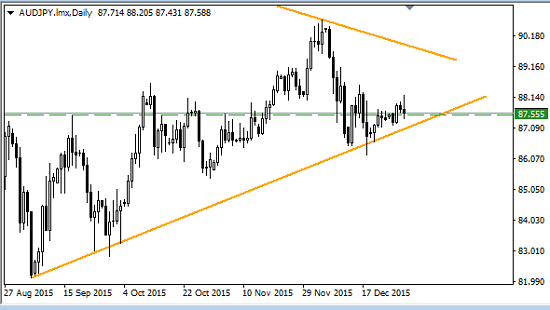 There is a possibility that the UK will follow the US in its rate hike cycle and certainly Carney’s language will have to be watched for clues. If you believe the recent press you may think that the recovery is well on the way but with the last quarter GDP missing it also has some credibility issues.

January will reveal if the rallies we saw last week in the equity markets and commodities including oil have got legs. If they prove to be wobbly watch out for the market sentiment. We have all the warnings of volatility, and of course emerging market pressures with their dollar denominated debt threatening a crises that could reverberate around the globe and that includes the fragile Eurozone.

Whilst Santa enjoys a break remember the usual suspects are still in the building. If we want to enjoy a safe and prosperous 2016 we would be wise to watch their every move!

Happy New Year to all