Roll Up To The Global Zoo! 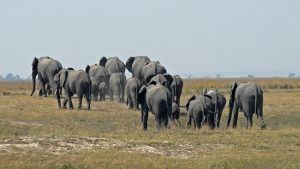 This week has got off to a risk-on start, appetite for equities fired by the Goldman Sachs comments pushing oil further.  Recovery has been seen in commodity currencies. There are serious roadblocks ahead and not all the analysts agree with Goldman Sachs. They never do! So let us review last week’s action and data in the context of the bigger picture so we can prepare for whatever the market delivers to us.

Marc Carney has attracted some political hate mail this week from the Brexit campaigners as he tried to explain the economic pitfalls of leaving the European Union. The referendum is his elephant in the room. It is not the only one, with The Donald doing his own impersonation in the States and the world media coming to the idea that he just might make it into the White House, serious economists and analysts are trying to figure out just how bad that might be.

Apart from elephants we have a growing flock of black swans closer than the horizon and heading this way. Among them leveraged non growth…how depressing is that, a pile of USD denominated debt gripping the once emerging , now not so much, markets and the troubles afflicting the EZ including a very public disagreement with the German Finance deity, a migrant crises and violence continuing in neighboring Turkey.  I haven’t mentioned the Middle East yet.

Not surprisingly sentiment has been on a bit of a switch back ride this week, although, we did close the week out on some firmer news from the US. The question once again is ‘will they won’t they?’  Just how is the market looking at all this information interlaced as it is with so much danger? More to the point how do we protect ourselves and find opportunities at the same time?

The Global Zoo: Cause For Optimism?

At last, late on Friday some news of possible inflationary trends developing. The retail sales were particularly impressive at a healthy 1.3% against an estimate of -0.3%. That should have the hawks ruffling their feathers. The USDX liked the news along with improved consumer sentiment and core retail although PPI did miss the mark.

The problem for rest of the global economies and in particular the emerging market sector is that with the aforesaid US debt and the threat of a rate hike by Yellen this year the knock on effect could well be a knock out.

However, Rome was not won in a day and neither does one swallow a summer make, so there is a lot to look for in future unfolding data from the US to see if this is indeed hope of a trend or a temporary blip. There will be speculation ahead and the market analysts have many doubts as to the sustainability of a more hawkish outlook;

“Today’s data materially strengthen the hand of those within the Fed for a rate increase in June but we remain doubtful as to whether this view will prevail, barring an especially robust employment report in early June.” So says Anthony Karydakis, a New York chief economic strategist .

Either way the outlook for equities is indeed gloomy.  In the first quarter earnings and sales are down across the global board and particularly hard hit has been energy as one would expect and the financial sector, the stats are not encouraging.

Equity outflows continue both in the USA and all major global markets. The S&P had a bad day to close a ‘down’ week; 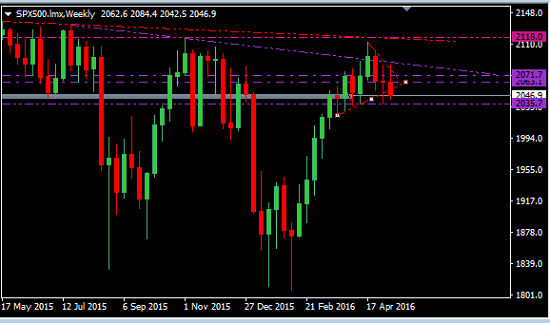 US bonds continue to gain strength as the yield lowered further despite the better news from the data, chart courtesy of stockcharts.com; 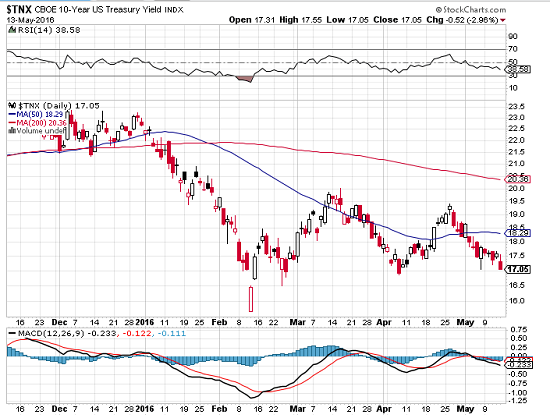 The USD has gained strength all week with a strong close; 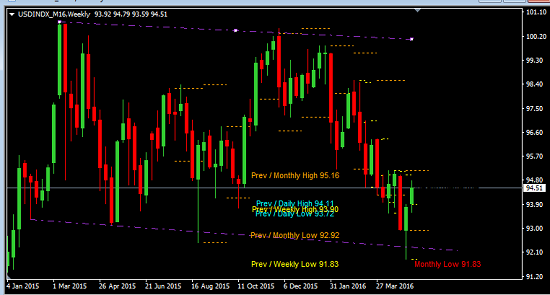 Whether it can gain traction is another matter, but in comparative terms, the US economy remains the best placed in terms of recovery which lends support to the view that it could at least hold its own. There is another factor to weigh and that is sentiment and when the demand for dollar increases as it surely will if we get deep into risk off territory then momentum could be easily gained. For now it remains critical to watch the index and see how it deals with the ‘next leg’.  The question must be posed as to how with the monetary policy differential we see, the JPY can keep strengthening and the USD falling. I have been watching this pair and as carry trades unwind it makes sense, but not on a longer view;

And as we are in an interconnected market place with many component parts, that means it is equally critical to watch what the crude market does next.

The Global Zoo: What Is Next For Crude?

There is the big picture and then the future unknown. There are arguments on both sides of the oil price debate and they are all concerned with supply and demand. As for the unknown future, there are geopolitical concerns that can and do rear up causing tightening of supply.  We have seen recent examples of  in the aftermath of the Canadian wild fires,although now at least from an oil perspective the situation is much improved. This past week violence erupted in Nigeria which was one of the catalysts that supported another price advance. I say one because of course we also saw US crude inventories dip and that had the same effect. Oil closed on a weekly resistance area; 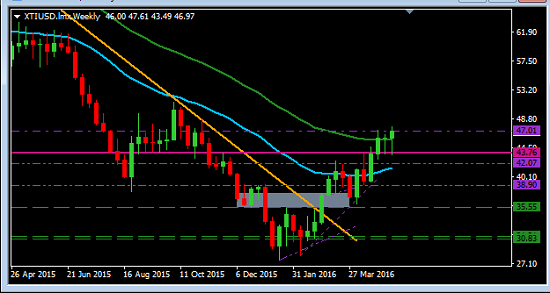 The current underlying fundamentals however are clear enough.  Supply continues to increase and the Opec monthly report revealed that a further 188,200 barrels per day were added in April. The Iranians are gathering steam and doing all they can to restore pre-sanction levels. The Saudis are upping their production planning ‘significant growth and international expansion’, that from a prime state producer. The fight to protect market share is unlikely to abate and the world is awash with supply.

In the meantime the Asian zone of world demand is shrinking with their major challenges of growth and debt to the mighty dollar. This is not just a head wind; it is a harbinger of the threat of recession on a global scale and national bankruptcy on a smaller one.

Be on guard for crude prices to fall again, with some analysts even suggesting that that the bottom is not yet in. The distant future and projections about supply conditions changing are too distant for the now and whilst we must always be prepared for those changes, in the now we have to acknowledge the underlying circumstances and stay prepared.

The Global Zoo: The Week Ahead

Early Tuesday the Aussie minutes from their policy meeting, NZD inflation expectations.  A lot of GBP news this week starts with CPI and PPI…inflation data! The same from the USD with building permits as well. NZD dairy prices and their PPI also Tuesday.

Wednesday we have crude inventories as always, the very important job stats and average earnings in the UK, and of course watch out for the FOMC minutes which will of course not reflect the data from Friday but always important!

G7 meeting in Japan, discussing global governance and geopolitical challenges (aka the elephants and black swans!) startFriday and carry through to Saturday. Friday will also bring CAD CPI and retail sales.

The opportunities lean to shorts in the equities, DAX has broken the trend line on the daily, not quite so convincingly on the weekly, 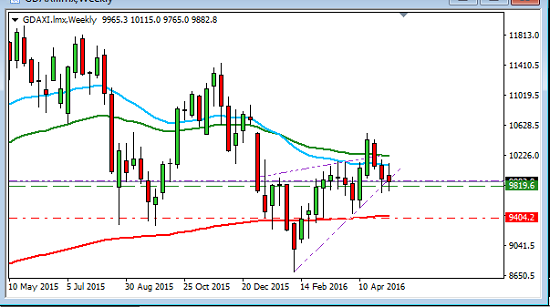 Gold for a long, watching the upper trend line . 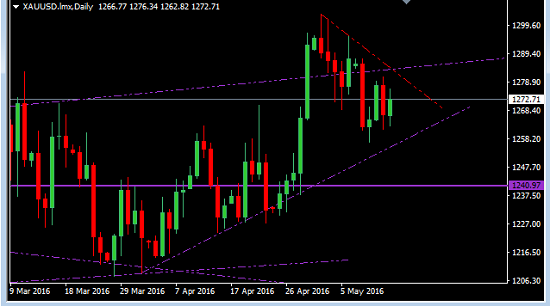 As for the UK with the gloom spread by the BOE chairman and the close polls in the brexit referendum, it is a potentially volatile component.

The GBPNZD is on the watch list as a technical set up but the safer position would be a short on the FTSE. 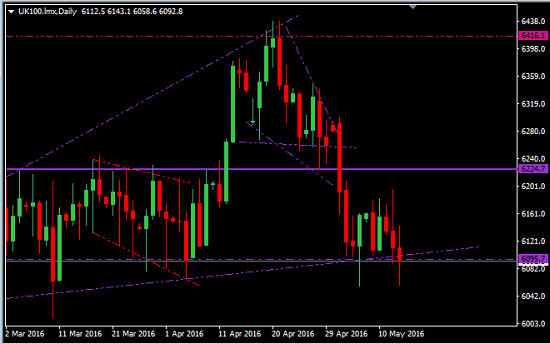 Also looking for a USDSGD long, and in the NZDUSD currently have a live short position.

I always think of fundamentals in layers much like watching three chart time frames. The big picture  is showing the underlying conditions as weak global growth and weak equity markets. Oil and gold have bolstered commodities but they are weak in other areas, particularly copper which is of great concern, chart courtesy of stockcharts.com; 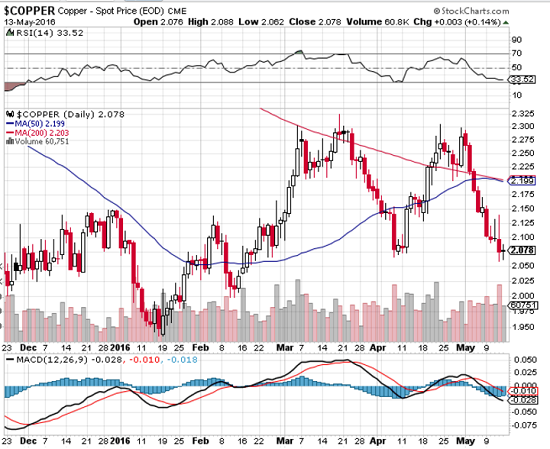 Additionally we have seen dramatic falls in iron ore after what was named as a speculative frenzy. It puts us on our risk-off guard as we watch and look for further deterioration in the global stock markets.

Sentiment is affected on a shorter time frame, even knowing these underlying facts it waxes and wanes with optimism speculation and the odd frenzy. News and noise is our shortest timeframe equivalent and we have to distinguish between the two although they can both affect sentiment.  In recent times sentiment has been on a switch back ride of its own, and even maintaining a weekly risk environment is uncertain with all kinds of grey areas between risk on and off.

This is a challenging market and not just for the retail trader but for the large professional funds whose costs of moving in and out of positions is much greater. Capital flows from equity funds have clearly shown that they are prepared to do so and with safer havens in mind;

With our growing global zoo, a veritable flock of black swans and enough elephants to fill a whole house of rooms, controlling risk and staying aware has never been more important.