Here we go again! Janet Yellen had her say at the New York Economic club and seemed to drive another nail into the coffin of central bank confidence. The USD lost value in response to her dovish rhetoric, questions as to global micro management arise again and some interesting reactions elsewhere prompt caution.

As to risk, well uncertainty continuing as it and a gloomy FOMC chairwoman, there would be reason to expect the risk to turn negative, but the data upon which the Fed publicly depend did not support the gloom. So there we have it, continuing slow and unsure recovery in the US, the FOMC on the back foot, risk trends vulnerable and political headwinds everywhere.

Hawkish opinions from FOMC  Bullard, Williams, Harker and Lockhart all just before Yellen’s Tuesday speech, did nothing to change the chairwoman’s cautious and dovish stance. It is seemed by some as a climb down and by others as just confusing. Even after her rhetoric another member, Mester saw a strengthening economy fit for tightening monetary policy even though a more gradual pace than at first conceived. Either way it seems an April hike is off the table but a June one is still a possibility so we have something to speculate about at the very least!

When Yellen was asked to compare the decisions and the data from December to March, she admitted it was a good question, with an ironic smile and and then proceeded to skirt around a direct answer, which boiled down to her perception of a ‘slightly weaker projected path of global growth’.

My quote of the week, comes from John Author, a respected and wise voice from the FT economic team. His comment was this…’’Central Banks have succeeded in weakening the dollar, and arresting an incipient recession in manufacturing that greatly threatened the emerging world, at the cost of a fall in their credibility’’

But what is the cost of that loss in confidence? Another threat to the risk environment?

The next question is what else can Yellen do to keep the lid on the USD. The data is improving even wage growth was apparent in the Friday numbers, the labour market is also improving  with NFP beating the estimate. But the real news was the US ISM manufacturing data, up from 49.5 and in contractionary territory to 51.8 back in the expansion zone, chart courtesy of tradingeconomics.com:

. This number predicts advances in GDP , both production data and new orders are doing particularly well.

Maybe the Yellen approach, or the global deal as it may well be, is working. The Chinese Caixin PMI rose from last month but still under 50 at 49.7. The Euro zone too showed very slight signs of improvement, although the two majors are borderline, with French PMI at 49.6 and germany at 50,7

In Japan the news was not good giving rise to more speculation of BOJ intervention with more easing:

The UK also saw a miss on PMI (manufacturing but still above the 50 watermark at 51. Their GDP also was slightly better than expected. The woes in this economy are still more focused on the political agenda.

A market mover and sentiment influencer in its own right, this a critical market to watch. The technical viewpoint shows the fragility: As Yellen pushed down the greenback, Oil did not respond. The agreement to freeze production grows shakier with the Saudi’s now refusing to take steps unless they are joined by Iran. As we have discussed many times, even a freeze will not solve the supply issue, at least it is not a quick fix. Only the rumour of it brought relief. This week saw Russian output increase by 2.1% year on year.

A pullback but the performance this year is remarkable, which always begs the question, why? 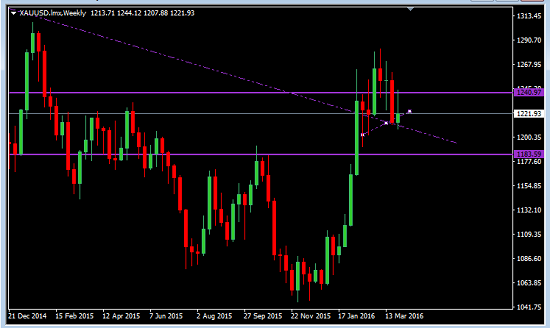 Is it a sign of USD weakness, a creeping fear or a perception of inflationary trends? Technically it broke a daily trend but as we see now faces a weekly resistance. Forecasts for growth are being lowered, corporate earnings are falling and that means earnings per share are as well and the P/E ratios are rising. Even with rates lower for longer in the US the equity markets do not seem to have a catalyst to propel them up or to sustain them where they are. If they fall they will bring sentiment with them.

This is looking like a completed correction and a resumption of a downtrend, chart courtesy of stockcharts.com This could herald problems elsewhere, such as emerging markets that tend to follow, so another area to keep an eye on, On the subject of volatility it is true that it has calmed down as we have seen in the VIX at much lower levels. However the forex still is registering more than the S&P index.

This subject really could take up a whole blog. What is unfolding in Europe is pivotal. Brexit continues to undermine the GBP and the vote is not until June 23rd. This week the Greek debt issue has resurfaced as WikiLeaks found an email from the IMF to the EC warning that they would pull out of the troika unless some debt relief was made available to the Greeks. They have a hefty and debilitating repayment schedule and it should be no surprise that the Greek GDP is shrinking and unemployment growing under austerity measures.

Schauble, the German finance minister does not look ready to make any concessions.

The so called ‘Union’ is under pressure from both these issues and there is another problem. The migrant crisis has just become more complex and threatening to the stability of the geographical as well as the economic region as the EU have now decreed that many of the refugees will be transported back to Turkey already causing riots and protests in Greece.

Ready Steady Go! : The Week Ahead and Opportunities

A look at the calender will show us any catalysts

In Australia will will have retail numbers on Monday. A inflation indicator. In the UK construction PMI

Tuesday and the second ISM number for non manufacturing, services are an important part now of the US economy. Also a trade balance from Canada, NZD dairy numbers and US jolts.

On Wednesday we get to see the all important minutes of the FOMC, especially interesting will be the differences of opinions. We have the ongoing oil inventories… always important.

Thursday there is an ECB meeting and the chance of a speech from Draghi who will be likely to attempt to talk the Euro down if he can and more from Yellen.

UK manufacturing on Friday as well as CAD job stats.

There are potentials market movers, especially from the central banks, confidence shattered or not. The USD index is at a critical point, I favour shorts in the Euro both fundamentally and technically, but will wait for a mature pattern and thee may be some upside yet. The FTSE is another short opportunity and eventually the S&P is we get the appropriate set up. I will be looking for signs of USD strength reinstating itself but it may take a while and the choices will have to be carefully made. We have to be prepared for another move to the downside but there are some long USD candidates. The Canadian is also an attractive short as oil looks precarious, especially potential longs in the AUDCAD pair and USDCAD.

The AUDJPY is permanently on the list should we see risk aversion, but longs also if the BOJ take steps and the data is good from the Australians, but watch out for the tone of the language from the RBA on Wednesday. We have to watch the commodities index for directional clues.

A new quarter has just started not just a new month and not much in the way of news and underlying fundamentals supports a risk-on environment of long duration. It may be that we are in a period of uncertainty that is not bad enough to invoke much fear causing a significant shift towards risk aversion so an area of grey and potential ranges. There is a big picture and major weekly levels that deserve our utmost attention. Despite a loss in confidence of the Central banks and in particular the US FOMC, we still have comparative and relative strength issues in monetary policy.  Those are the two main areas of focus and one of them will dominate the other: monetary policy and the sentiment environment ( the risk trends). We may be at a crossroads and there is a lot of wisdom in being prepared for different scenarios and whilst it is true that volatility has settled down a little, uncertainty certainly has not!