Tracking down fundamental themes and identifying the sentiment is a vital first step in making our trading choices, so this week we will take a close look at what the pros are thinking as events take place and what we can look forward to this coming week.

Urban dictionary at hand, Chutzpah is my word of the week (thanks CNBC!). And it is the lack of it, that is to say upbeat (can we say audacious!) confidence that the market and its trading fraternity just can’t seem to get a grip of. Another mixed bag from the US data feed, a vix dropping, equities advancing but not with a feel that any long term momentum has been established. This is particularly true in the EZ and in the UK. In the US the Dow and the S&P are facing overhead resistance and earnings season. Sentiment is choppy but veering positive; slightly. No clarity underlines the potential for strong trends but there are two catalysts in the wings. Chinese GDP right at the start of the trading week, and at the other end the ECB and the Chinese revelations may well add some pressure on the Euro managers to take further accommodative steps. So this week we need to look at what effects this critical may have for the week ahead and the longer term.

Yes, China has made the top position this week and why? The state of  global inflation, zero everywhere you turn and a few turning negative. Disinflation threatens deflation and it spreads from economies such as China. The emerging sector of economies and the commodity set have not only benefited from Chinese growth but from the sheer speed of it. Now it is struggling so even slowed down growth is a factor in their decline but when it shrinks the alarm bells ring. PMI has sounded the warning, and now we await the evidence in the GDP numbers.

Little wonder that the world is watching. Those alarm bells will be heard globally. But this deflationary export concern is not just confined to the neighbours and the import countries but well beyond. It will affect ECB and the BOC and the BOJ and more importantly it will affect our sensitivities and thus the risk environment bringing a change obtruding rules for which we have to stay alert. There is not a economy that will escape the effects.

Pre GDP there are still those who doubt the credibility of the  numbers which lends a negative before they are revealed, but that aside expect movement. Here is a chart of exports and imports which doesn’t bode well

Obviously we cannot assumptions except that this is a really important factor in the world outlook and in considering the consequences consider this also; deflation is at its highest levels since 2009. A sobering statistic.

EZ CPI’s came in on expectation last week, but all negative numbers, with Germany now showing -0.2% .

The German 10 yr Bund rate fell further to 0.55 worrying enough, but the more sensitive 2yr is now well in negative territory and falling.

With negative inflation in the Eurozone , mounting global debt and domestic growth insufficient, Eurozone weakness is the area to watch and wait for the somewhat inevitable trigger.

The ECB press conference must be monitored to see what the Chairman has to say about future monetary policy. The market will be looking at his tone and outlook for the Eurozone economy. If he leans toward more easing and extending QE , then we can expect weakness in the Euro. The conference takes place on Thursday and PMI’s from France and Germany follow quickly on Friday. This is all greatly important for the future predictions of inflation

Recently it has been the number one theme and no doubt the big three will jostle for prime position, but the tightening of US rate hikes will figure for a long while to come.

The data this past week from the US started ominously with nothing to cheer about, but on Thursday optimism returned when  core inflation edged ahead and unemployment data was the best improvement seen since December 1973…think Ronald Reagan!   The  improvement in core CPI leaves some room for some further speculation of rate hikes although it goes without saying that there is plenty of evidence to justify further delay.

Strong unemployment numbers is more evidence of a tightening labour market and furthermore, it helps the more disappointing view of recovery from Tuesday’s retail, core retail and PPI.  Speculation will continue to be clouded on the issue of a rate hike and when it may happen with no clear catalyst emerging as yet.

There is, however a continuing discussion amongst analysts as to the effect of no rate hike at all as the global pressures mount. If the global issues dampen the FOMC outlook enough to delay indefinitely what affect could that have on the world economy? Does that not in itself evidence the extent of the export of deflation? And should we not expect this factor to impinge on company earnings in the US which translated to an unsustainable equity market, in the medium to long-term?

How Oil Continues to Influence our Themes

Schlumberger last week announced a 49%drop in profits in their third quarter with a warning that the 4th could be worse. There will be others , but management is of the view that the recovery of the oil market will take a while yet. Meanwhile this week, inventories expanded by 7.6 million Barrels in one week.

Here is the weekly crude chart as at the end of last week, and it it fell heavily out of the gate at opening ; 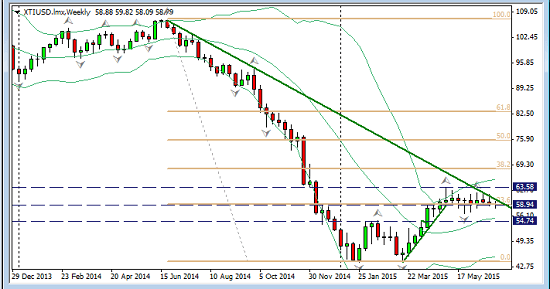 Profit Themes: Opportunities In The Week Ahead

These will be defined by the first two themes China leading the way before London Open. For trade opportunities, I will focus again on Euro weakness once again, EURUSD, EURGBP are my favoured pairs. The GBP has had a big push down and saw average earning slip which didn’t help and unemployment numbers came to the rescue to a degree. However the daily fx policy chart, which I keep an eye on illustrates weakness for the USD and the GBP but the comparatives remain the same . The issue, as always is timing.

I also still like the USDSGD for longs but wait the set-up. The SGD GDP numbers beat the estimate but there was little easing form their central bank and the likelihood of more to come in the pipeline. Once again China news will weigh on this pair.

There are opportunities to short the JPY as long as we stay on the risk -on side the sentiment balance but it needs monitoring and understanding the feel of the market as the week progresses. Again GBPJPY is on the long list.

In the event of deterioration of the sentiment I continue watch AUDJPY.

Other calendar events include RBA minutes, Monday, Carney again on Tuesday, and we know by now what that means….Dairy prices in NZ also on Tuesday is always on the radar especially after such a good run. BOC rates and statement happen Wednesday. UK retail on Thursday (same day as ECB press conference) and as already pointed out watch for EZ PMI’s on Friday.

It is always difficult to trade a market where the edges of risk-on and risk-off are poorly defined. It tends to lead into choppy waters as it indeed did in the last week. The Vix has been dropping again indicating that we are leaning towards risk on and the advance on Friday of the S&P supports that view. For all the reasons given above, the risk-on environment seems to lack conviction and therefore not a state that may last for long . The outlook for emerging markets is not good, and whilst there was relief from the delay by the Fed, the stalling indicates deflationary trends which hurt them further. That will eventually spill in the commodity set which is of course, also vulnerable to the Chinese numbers.

For that reason I expect better trends from a risk off scenario, than from the slightly risk-on which we experienced all last week. It is a shorter term environment for now but that could all  change. Monday’s data is a major event risk and will potentially set the tone until Christmas. No decisions can be made until it is absorbed and wise to remember it attracts the concerns of the  inter-connected market place and carries uncertainty with it. Fasten yourseat-belts, lets hope for trends ahead!