As the economic world digests the data from the US last Friday and what it may mean for the weeks trading before the Christmas holiday, one thing has become clearer; that the divergence in monetary policy between the USA and ‘the rest’ is becoming ever more polarised. Why does this matter? Its all about inflation…those that have it , or at least the promise of it as in the US and those that do not have it and use their policy to inject enough liquidity to chase it.

The UK delivered its ‘grey area’ stance during the week but whether or not the strength of the US pulls it back towards the same end of the policy spectrum, or how quickly, is a theme we can watch develop. Dr Carney is not likely, in his inimitable style, to make it easy. There are other areas we must now pay attention to and that includes the stock market which has consequences of its own and the potential spanner in the works in the form of the Chinese economy with more worrying results early Sunday morning.

Bill Gross of the Janus fund and one of the globe’s most highly respected managers, now see’s the December rate hike as a 100% certainty. The market overall is at least 80% convinced. The 10yr treasury yields soared on the news; charts courtesy of stockcharts.com;

and the investment opportunity Bill Gross sees is to short the 30yr treasury bonds; 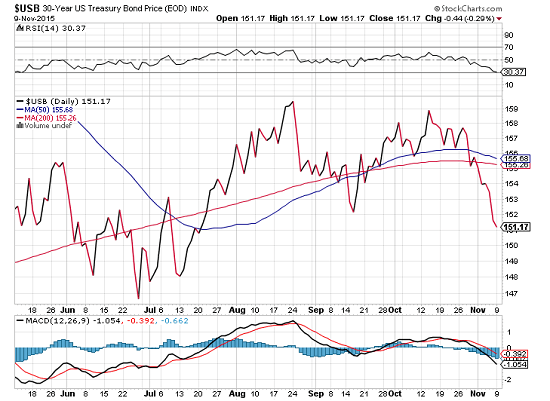 Interestingly, equities were very muted in their reaction, here is the S&P on a daily chart as of Friday; 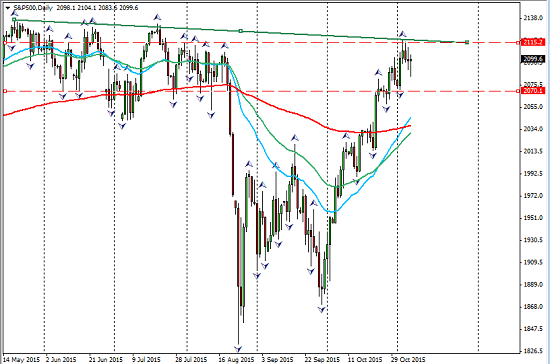 The prospect of rate hikes would normally be expected to cause a drop in the stock market as the prospect of less liquidity starts to become a reality. But there are many factors involved in these days of distorted markets, a subject we have dwelt on extensively in the past months. The accommodative policies on the other end of the policy curve have kept money flowing this far into the US and particularly where the Eurozone is concerned , not much prospect of it slowing any time soon. Quite the opposite as we are anticipating extension not reduction of the current QE program.This may however be lessened by the possibility of rate rises across the ‘pond’.

For now the US equities have benefited even as we accept and understand that earnings ratios are back near their highs, but it is another arena to monitor for trends;

There is overhead resistance in the major markets on a technical take, and that may need a strong catalyst to break through. The prospect of a rate rise has left many analysts wondering what that might be.

The USD meanwhile cleared the fence with ease, this was Friday’s chart after the news; 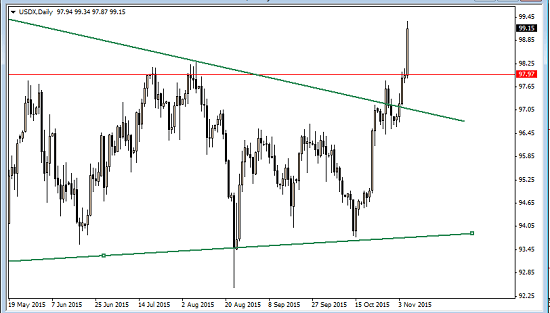 Dollar strength will exert pressure again on commodities, oil in particular and on copper and  in emerging markets and commodity economies. This in turn and in time will impact the earnings of companies to add downward pressure to equities. These are all factors that weigh on sentiment and whilst the upbeat data may lend more to risk -on it can quickly change. Dollar strength also has the effect of cheapening exports and increasing the cost of exports, all of which will eventually take its toll. Of course good news for domestic consumers can be bad news for corporations dependant upon their export trade.

Last week I advised watching out for the wage growth statistics as the best indicator among labour statistics to indicate any inflationary evidence. The labour statistics jolted the market with the biggest increase in 5 months but the average earnings also beat the estimate, rising 0.4%., chart courtesy of trading economics.com

That is the good news that may trigger the Fed into action as it shows an acceleration which when it begins can propel itself within a few years beyond the 2% inflation that the FOMC are aiming for.

The trick will be to maintain it at 2%, if and when it eventually gets there…this is forward thinking but that is exactly what the FOMC’s task is and if and when acceleration gets traction they will not want it to overshoot, hence the policy rate rise program . Yellen has indicated a slow rate of increase once the program launches but that will still rely heavily on data and rates of growth and the rates of acceleration and momentum should they manifest.

China, again, and likely to continue to be the theme that can upset any fledgling inflationary trends. The news this weekend was trade balance but we have to look behind the number to understand the state of play.  Exports fell by 6.9% and imports fell 18.8% leaving a record high surplus. The combined effect is an 8.5% fall in exports and imports this year to October. This is another problem for commodity currencies and emerging markets

There is CPI for China in next week’s calendar on Tuesday and industrial production on Wednesday.

The possibility of hikes in the US will take some pressure off Mr. Draghi, intent as he is on keeping the Euro cheap. There are signs of growth in the EZ but it is patchy as the results across the region vary dramatically and Germany remains exposed to the challenges of an exporting nation in the light of Chinese woes.

That leaves the ECB with a delicate balancing act in both policy and rhetoric and there is little doubt that their chairman will continue to do what it takes to protect these slow improvements.

As one would expect, oil prices were pushed back down by the rally in the USD, erasing more than half of the recent gains. Technically it is inside a range but heading towards the lower boundary an important level of resistance to watch in the light of world events; 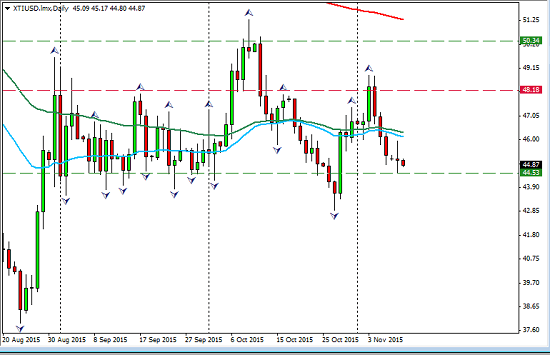 There is also a head and shoulders forming from the technical viewpoint. As for the fundamentals, Bloomberg ran a couple of articles this week on the return to full production of Iran. Suppressed by sanctions which are due to be lifted by summer next year, the Iranian Oil minister stated that ”it is our right to return to the level of production we historically had”.  Here is what that looks like in chart form;

This poses the threat of increasing the already acknowledged glut and that hurts all other producers, especially the worst hit, the US with rig closures mounting, the Russians and the Venezuelans to name but a few.

There is also the question of unknown storage, and how much the Iranians might have accumulated whilst under sanctions. The downward pressure and thus the  down-bias remains.

Pip Hunting; The Week Ahead

Although quieter than last week there is still a quota of event risks to watch. Nothing of note on Monday leaves the time to see just how Fridays exceptional news is factored into the exchange rates.

The Chinese CPI is Tuesday as already noted.

On Wednesday its the UK again, with job statistics and the average earnings, important as we have seen in the US. Lets see if there is reason again for a Carney twist! Mr.Draghi is also speaking in the Bank Of England’s open forum.

More labour statistics on Thursday, this time from Australia and the weekly unemployment numbers from the US.

On Friday, the week closes with German preliminary GDP,  retail numbers (another inflation marker) along with consumer sentiment and PPI from the US

The opportunities this week include the EURJPY shorts on their comparative policy stance, EURGBP another short on pullbacks from the dovish tone of Mr. Carney, USDSGD  longs on pullbacks following the strong moves and the implications of rate hikes for emerging markets and finally, the AUDNZD longs on relative economic standings and outlook. 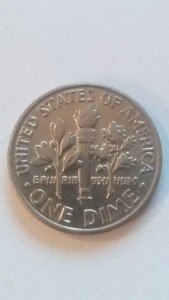 In conclusion, The USD looks technically and fundamentally ready for another leg up. What needs to be monitored…and again it is a constant watch, is sentiment. There is a question mark over the US equity markets and technical levels to challenge.

Risk climate can change on a dime, even a more expensive one (!!), so let us see what the week unfolds and be prepared. Either way all bodes well for a stronger USD.

Judith Waker
If you would like to learn how to trade like a professional check out our 5* rated forex mentor program, RISK FREE; by clicking on the “Get Started Today” Button below