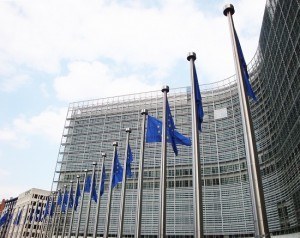 Great Expectations describes well the market mood as it awaited the man who was prepared to ‘do what it takes’ and first sight it seemed that the ECB had met them and indeed exceeded them. It all lasted such a short while.  Mixed messages and confusion ran riot in the markets following another surprise from Draghi. Not with a lack of action in the policy arena, but in the post decision statement and question and answer session.

Mario Draghi seemed off guard and uncomfortable with some of the questions. The Euro whipsawed from a low 1.0821 to a high of 1.1218. Was this a deliberate piece of forward guidance or another EZ miscalculation? Partially perhaps, intended but a more expensive Euro was really not the idea in such a fragile recovery.

There remains another issue and a much more serious one to contemplate. That is the effectiveness of QE, the market confidence in central banks and the potential shift of macro themes and of risk climate. For now though the markets roared into the close with no seeming worry about the global weaknesses and with more money thrown in it looked like spend spend spend was back.

Does it have the fundamentals to sustain it? Has oil bottomed? Is China stabalising? Are there signs of growth? Is there inflation? Anywhere? Can we maintain the optimism? Time to take a closer look at the underlying issues, at the realities and then the probabilities.

We have had optimistic comments from the IEA (International Energy Agency) this week, talking of the bottom in the oil price and improved conditions with lower outputs, particularly in the US where OPEC policies are really beginning to bite (my words not theirs) and that the Iranian return seemed at present less ‘dramatic’ than expected.

There are a few points to remember. The Iranians are not yet part of the agreement so the drama could build back in. The agreement has to hold and the parties involved are not natural bedfellows. There is a demand issue as well as a supply issue. And that means demand has to grow and that in turn implies global growth somewhere…anywhere! Are we seeing it? Tentative unconfirmed signs in the US. Nothing else. Demand forecasts are on the downside as the IEA had to admit.

The IEA added their caution this way:

“For prices, there may be light at the end of what has been a long dark tunnel, but we cannot be precisely sure when in 2017 the oil market will achieve the much desired balance. It is clear that the current direction of travel is the correct one, although with a long way to go.”

So not 2016 then. At least they left out the word ‘glut’ this time but it has not really gone away.

Technically oil has seen a strong rally but does face overhead resistance but as the weekly chart shows undeniably,two strong weeks of advances: 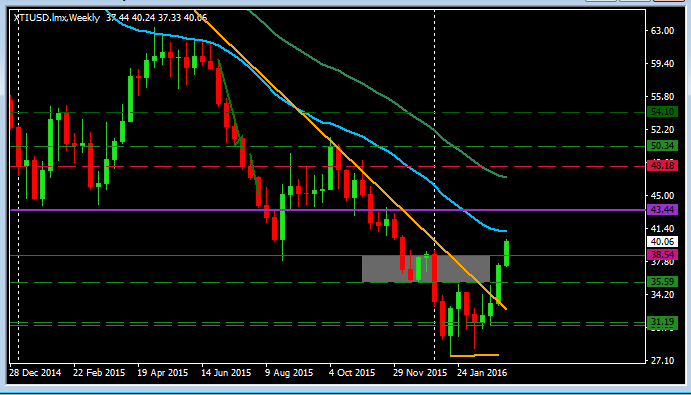 Policy has dominated moves in the market as economies not only seek to stimulate their economy and kick start inflation, all of which has seemed to fail, but also in an attempt to vie for their place among each other trying to invent the next piece of policy to place them favourably in the globally connected market place especially where exports are concerned. The dreaded currency wars. Even common sense leads to the conclusion that sooner or later the credibility of such a course will be undermined.

There was a feeling that that was one of the reasons the market snapped back on Thursday although in truth it was more likely that the free ride has an end in sight. I doubt that is what Draghi was trying to put over but that is what was heard. In fact he only said that there would be no more rate cuts further into negative territory. QE was in fact extended and increased and the lower for longer theme will continue.However he does seem to be following the line of G20 in avoiding competitive devaluation in the future at least where negative rates are concerned .

The Equity market reconsidered the package in Fridays trading and it lent to the risk appetite taking a further grip of proceedings: 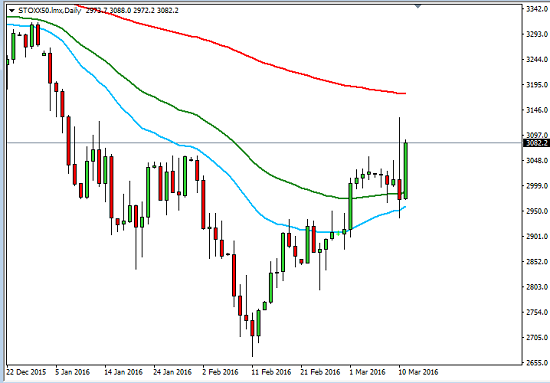 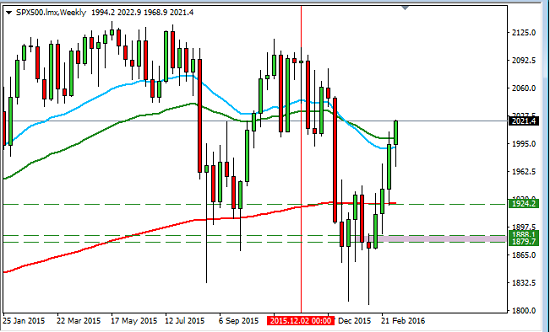 However, the currency keeps on advancing and while it does, it offers a thorn in the side of any recovery for Draghi and his rather desperate team. It recovered much of the this months drop: 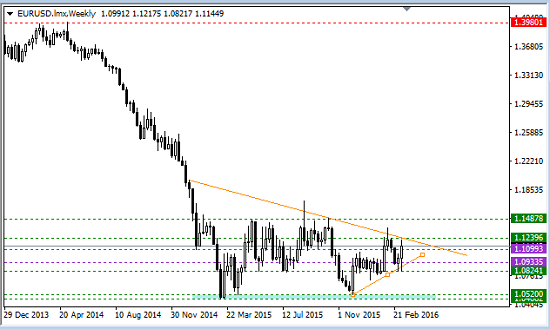 Of course shadowed by the shenanigans in the ECB, we also saw New Zealand come in with a surprise rate cut and a rather downbeat forecast. This is the fifth cut since June of last year and it is a record low at 2.25%. It still has plenty of room for more and compared to the ECB has more ammunition in the policy arsenal. The dairy industry has caused a lot of challenges as prices have drifted down so the goal here is to support the exports with a cheaper currency. 90% of the milk produced is exported. New Zealand is yet another economy that has inflation close to zero and therefore also a concern.

The excitement is not over yet, by a long way. The FOMC meeting is the next catalyst standing in the wings no doubt considering also the effects of anything they say and do. The rate is unlikely to increase but the rhetoric again will be crucial and the seeds for more volatility continue to remain in the calendar.

There are many indicators that give clues as to growth, or lack of it, and to detect whether there are any signs of inflation.Just by looking at PMI we have seen recently how many of the major economies, including the Chinese, are struggling under 50, the magic number between contraction and expansion. As for inflation, take a look at CPI stats and the outlook is not hopeful. The following charts are from the two biggest QE economies. charts courtesy of tradingeconomics.com

We will keep an eye on the usual list of indicators, all reflecting the current buoyant mood: charts courtesy of stockcharts.com 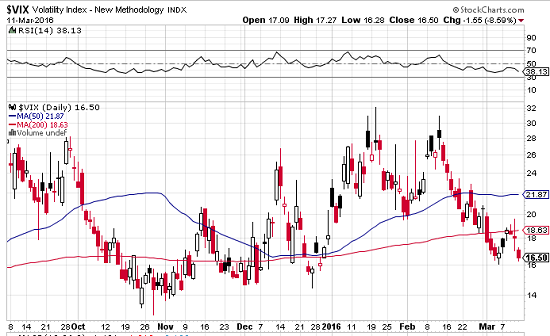 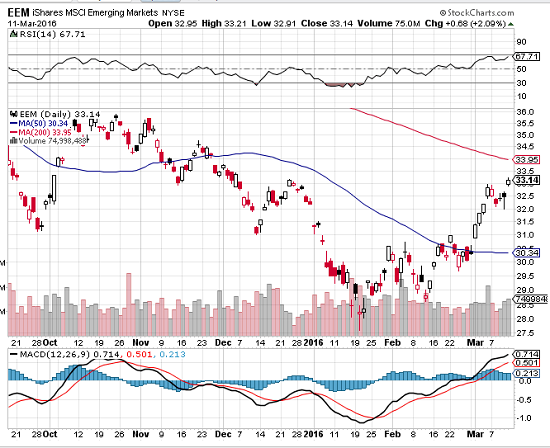 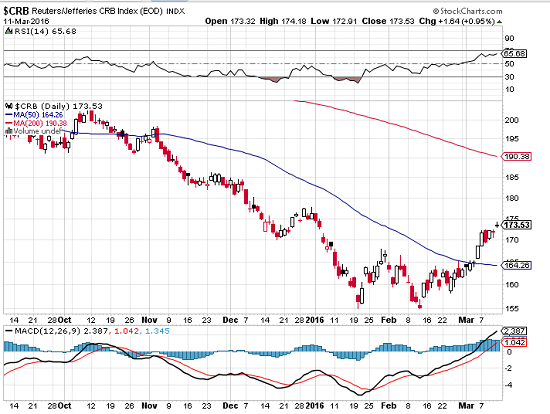 The AUDJPY, the sentiment ‘pair’ here in a weekly perspective: 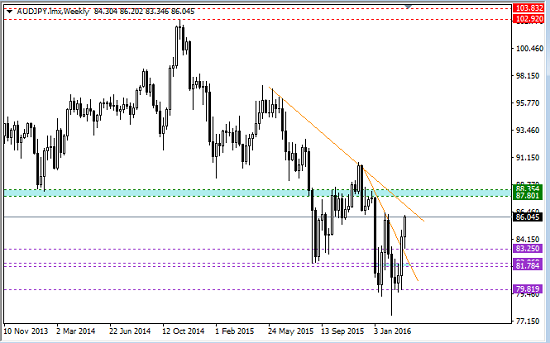 In this set of course, are the two major charts, Oil and S&P as shown above. Additionally monitoring any developments in China, including ongoing data of course but also any steps they may take to shore up their GDP including currency manipulation.

Patience Pays: The Week Ahead

Tuesday, USD retail core retail and PPI  is a must see!

CAD manufacturing  and more inflation data from the US in the form of CPI just before the big FOMC meeting.

It is a week full of catalysts for volatility and caution once again advised. There may be opportunities in the AUDNZD and the EURGBP and they are both more immune from the rate decisions that are in abundance this week. I will be looking for some trading areas once the FOMC meeting is over and looking for higher shorts again in the EURUSD. If oil resists the overhead areas then there may be some trades in the USDCAD, but obviously nothing can be decided ahead of the meeting.

Experience has taught that volatility can be savage. We can choose a high probability trade and see it do what we expect and still lose. We can see gaps above stops. We have seen precipitous shifts in the market mood. We have learnt caution and the necessity to find those trading places a little more protected from the choppiness and the wild swings.

There is no sign of trending environments returning any time soon so conservative approaches will have to continue. Finally, it may be very unwise to assume this buoyancy will continue unabated. The need to monitor the risk environment on a short term basis will continue to be critical in a market building a rather (if you know your Dickens), Bleak House on what looks like sand.