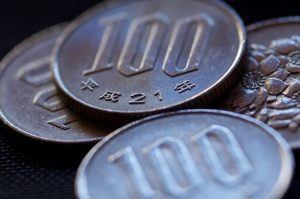 As we prepared last Monday for three central banks we did so with an accepted market wide bias. Three decisions, two surprises and one outrage followed and the market showed its shock.

The BOJ stand accused of at best misleading the market and at worst, according to one view, of a financial crime by suggesting and hinting one way but acting another. The volatility not only continues, across the interconnected market place, but increases with the Japanese yen surging more than 3% in four hours on Thursday. Now there is a statistic.

Meanwhile data from the US failed to ignite any optimism and that weakness extended into the USD which in turn, helped pushed oil higher in its recent rally. It is an audacious move whatever the dollar is doing, without fundamental support and with a whole lot of blind optimism. Divergences are peaking through with equities weak, Yen strengthening in a risk-off fashion while commodities continue to rise with a few notable exceptions.

Has the ebullience become unstable and unbelievable enough to push gold prices up 20% this year? We know one thing and that gold is not driven this time by fears of inflation. With currencies threatening devaluation and negative rates a dismal failure, there may soon be a more obvious run for cover.

With that in mind we will look at the week past in sharper focus starting with the BOJ back-down.

So dubbed in the FT, the BOJ’s experimental foray into negative rates is looking to be a rather disastrous one…except it cannot be undone. The planned and hoped for Yen weakening did not happen, quite the opposite as it has advance against the USD continues onward;

That all accelerated wildly after the ‘non-decision’ decision as we have seen. Problem is, it was a choice between the devil and the deep blue sea, with non-action bringing the same amount of incredulity as a choice of more of the same, although it was the latter which they seemed to prefer before the meeting, and for which the market braced.

Wrong footed again, the reaction has brought the JPY closer to the place where it is believed (if we can believe anything now) that the BOJ or indeed the minister of finance may intervene to prevent more damage to the economy. Ironic as it is, will they do it or will they freeze in the headlights? More uncertainty to come especially in the forex markets but beware of its propensity to bleed elsewhere.

There is another catch 22 problem. In the USA, with June approaching and not much time to see an improvement in data, what will the Fed do? A hawkish fed can help the runaway Yen, but can they justify it? The 10 yr yield and futures fed funds are not confident that the rates can hike and even once this year is now not a guarantee; 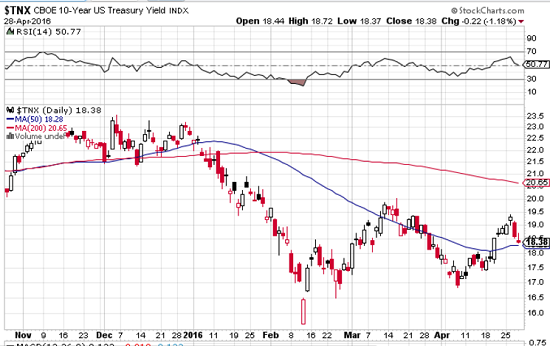 A dovish, accommodative, back off from the FOMC in June could send a very serious message to the deflation bound global economy. We know what that means. Equities, emerging markets, debt bubbles, now known as debt bombs, commodities (except gold if the going gets really tough) all at risk.

A look at the US data, supposedly the safest currency in the world reveals the problems, just this week, core durable goods missed, durable goods missed, advanced GDP 0.5% another miss, core PCE 0.1%. Nothing to promote any optimism except jobs which provides the Fed ‘excuse’ to keep tightening policy as a speculative proposition. If this is the best the world economy can offer what is there left to support any risk appetite?

Opportunities And Risks: A Crude Dilemma

Starting with the fundamentals, one would expect to be opening a chart on weakness not a strong rally. The pumping is stepping up, the supply equation worsening, crude inventories in the US at a high again and Iran playing catch up. On that point, it should be noted that Iran has extensive storage and they use it. Before the sanctions they were pumping 2 million barrels a day which dropped on imposition of sanctions to 700,000. Now it is reckoned that it will be back to the former highs by the end of June. Maybe by then, they will agree a freeze with their neighbours. Much good will it do.

Another factor is the reopening of the shale rigs in the USA as the price advances. When that is up and running, how will supply look then, set against a deflationary demand environment?

If you do not want volatility in your trading portfolio, then Forex is looking fraught with risks.

A rising yen and a falling S&P500 looks like risk off, but we know that the JPY was much more to do with monetary policy than sentiment. However, the environment feeds into uncertainty and that may crystallize a risk off environment.

The VIX is creeping up again; 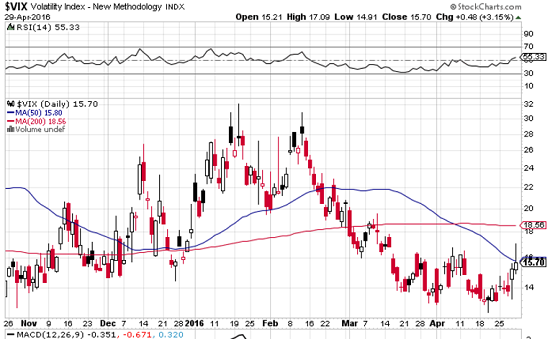 Commodities have been strong;

There are, however warnings in the Copper market; 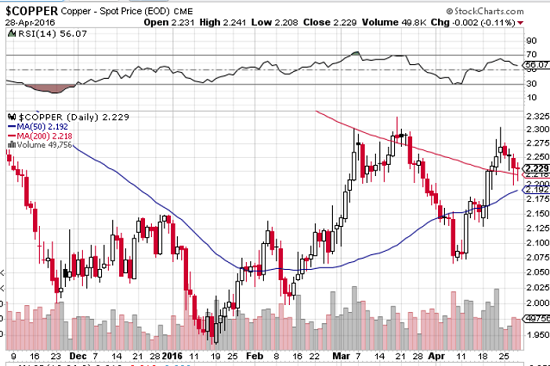 Equities are falling and more precipitously in Europe 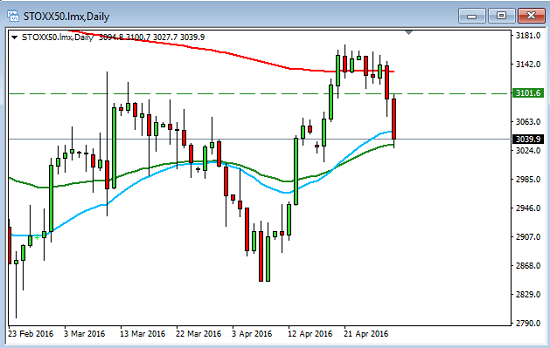 The Emerging markets are flagging weaknesses; 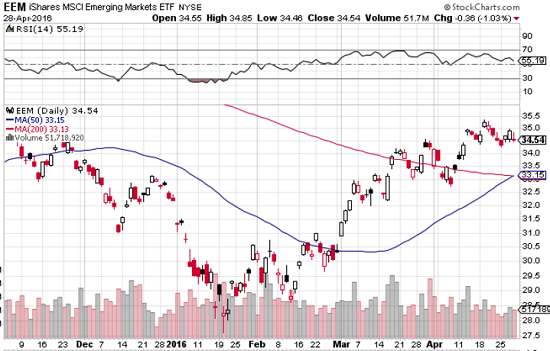 Oil in Friday’s New York session has been beaten back from its highs and with Gold closing on a high which broke a weekly channel, and equities on their lows we should be prepared for a very different week ahead.

PMI week again already and the US non farm data. Personally we should be more interested in growth than US employment but as we know well it is a market mover and not to be taken lightly. It holds huge implications surrounded Fed policy speculation.

Monday, most important is the ISM US manufacturing PMI which holds forward indications for future growth and GDP. Draghi speaks just after we receive PMIs from the EZ. Please note this is a bank holiday in the UK.

Tuesday and Wednesday are bank holidays in Japan.

Friday US non-farm data, watch especially for average hourly wages to see for any inflationary trends…or lack of them! CAD Ivey PMI

Because of all the BOJ driven uncertainty which is not likely to calm down any time soon the Forex is a risky option without strict controls and even with very careful selection. The USD index closed at a critical weekly and monthly support level and there is a lot in the diary to cause waves either way.

With inherent and apparent weaknesses in global equities and the likelihood for increasing risk off behaviour getting some traction, the focus is on shorts in the following indexes

Here is the weekly; 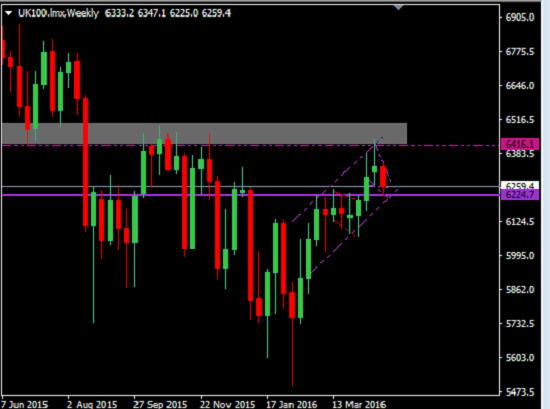 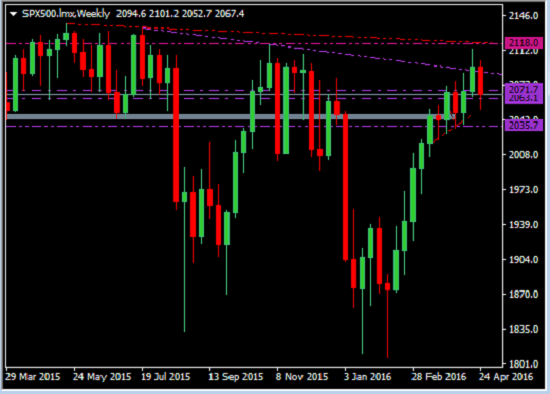 Dax, here on a daily perspective as at the week’s end: 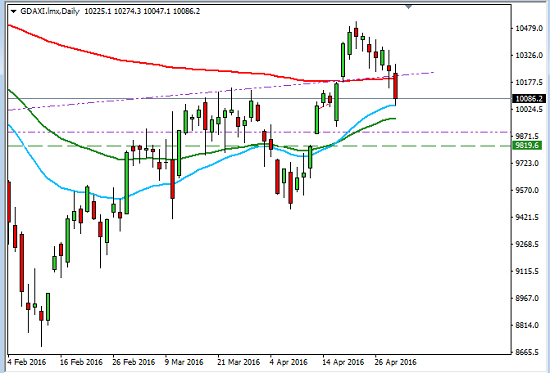 As for currencies I shall be watching the channel in the NZDUSD, AUDJPY for risk clues, GBPNZD, for a long, and an interesting trade-able pattern in the GBPUSD, remembering the Brexit uncertainty and the US data ahead.

The monitors will continue to be the USDX, and take a look where it closed on Friday

and Crude oil, the S&P500 and also the USDJPY to see where that goes next and to watch for possible intervention levels than can cause another unexpected lurch in the market, this is the monthly candle close,

There is no doubt that the BOJ have thrown the market into confusion and we have to watch for signs as to how this past week’s reactions will play out in the longer term. Preparation for shifts in sentiment will continue to be my focus, with little in the way of fundamentals to prop up much more in the way of risk appetite.

Anyone familiar with bear territory will tell you to exercise great care when hibernation season is over. A rested bear is a potentially aggressive creature and can inflict fatal damage. Ebullient bulls should pay attention.