Making Pips In a Tough Environment

It has been a tough few weeks, from the outset of the new year we have seen increased risk aversion, fragile and sensitive markets and volatility. All traders, includin the most seasoned pros are experiencing the challenge of ‘reading’ both sentiment and events to try to detect market direction. We have all had to handle unexpected turbulence and relentless volatility which we know can be a profit friend or a unpredictable enemy.

The bottom line remains and has become even more important, that we understand the big economic picture and at least increase our probabilities by preparing for data and knowing its potential effects on the trader mentality. Once that is achieved the only way to profit is with strict risk /reward rules, a solid plan and disciplined trade management.

Making Pips In a Tough Environment: To Boldly Go:

Please forgive the split infinitive which for members of my generation, is a celebrated one. The US Fed-ship Enterprise, captained by Janet Yellen decided to stay on ourse, but apparently there is a problem with fuel and she might have to do a U-turn. Enough of the metaphor. What was astonishing is that Yellen could not stem the risk aversion or the drop in the USD with her rhetoric which bordered on excuses. Back in December it seems she successfully maneuvered the FOMC into a catch 22.

What saved the day, or at least the week’s close was a combination that started with another rumoured Opec meeting, a slightly optimistic German GDP and a retail number in the US which beat the estimate. Overall the Euro zone growth was less than impressive, unless you are clutching at straws, with some serious concern in Italy and recession in Greece. And for the USD the second weekly bearish move.

The weekend breath was drawn on a slightly optimistic note but exactly how the risk trends will run next week, when all the information has been analysed remains to be seen. Suffice it to say that the Chinese markets are opening after a week’s vacation which could trigger another wild ride. Their trade balance data is released early Monday and there are a number of other hefty risk events in the calendar to watch out for.

The scores are in:

It was a brutal week. Equities closed up off their lows but all of them are trading well below their 200 day EMA.

We are technically in a bear market as defined by the world equity index (FAW) which closed 20% below the recent high back in May 2015; chart courtesy of stockcharts.com 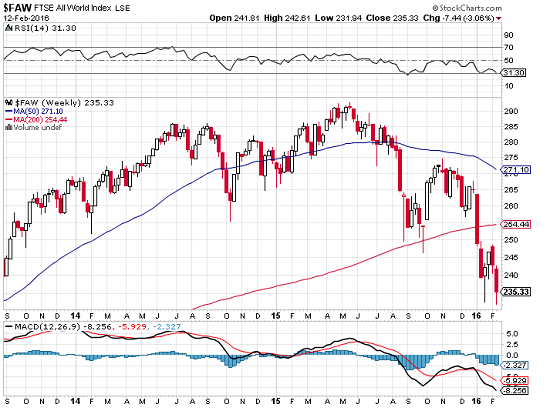 That is the formal definition of the bear equity market and there it closed at the weekend at the edge.. The US indexes are teetering around critical levels of support and as we know this is not just bout fear of global recovery. There is growing concern of losses in corporate earnings both in the energy and mining sector and now increasingly in the banking sector.

A word here about Deutsche Bank, in major trouble with a share price in free fall, they announced a bond buying-back scheme to stem losses and to promote confidence. Our friend Mr. Schauble in Germany assures us the Bank is in a strong and resilient condition…maybe not…Truth is that the bank have a potential liquidity problem that goes beyond the buy back scheme and the mere fact that they are having to prove themselves to their own customers may be seen as cause for concern.

Making Pips In A Tough Environment: Shock Without Awe

Until last week all the focus in market direction was on policy divergence: the USA and the rest. Central banks have become increasingly accommodative and the era of negative interests is in full swing. Sweden, the first to introduce them made a shock decision this past week to deepen them with their benchmark rate lowered from -0.3 to -0.5.

What does negative rates really mean in practice?  It means if you buy negative bonds, on maturity they will be worth less than you paid for them. It also means banks unwilling to pass the cost on to the consumer, are suffering losses as we have seen this week.

Notes with yields are therefore a popular purchase, the US 10 year note being an obvious example and the yield has been pushed lower on the week despite the move up on Friday, it’s low of the week was somewhat disconcerting: the following charts courtesy of stockcharts.com 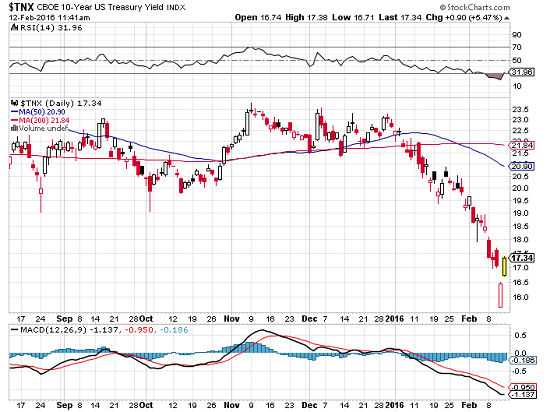 The currency war we are witnessing to devalue is losing it’s intended effect, and hastened the move to safety. It is also infecting the USA’s recovery. As the New York Times aptly expressed…”what if the bazooka is firing blanks?”

Janet Yellen attempted to hold on to some sort of central bank credibility as she maintained the course of tightening, at least the intention for it. But the gap has closed between fed and market as she softened, the list of exceptional circumstances is growing and the lean to dovishness is more apparent. She admitted that ‘there is always some chance or recession’, that ‘financial conditions have worsened’ and somewhat by the way, ‘a rate cut cannot be ruled out’. She had tried to remain slightly hawkish and upbeat. The market was not impressed.

There was little doubt that the worried ducks lined up on Monday as risk trends turned fearful. Oil and equities in sync again led the charge and the Yen made a dramatic move up defying the BOJ attempts to deflate it by their recent negative rates announced the previous week.

There was little doubt also that Janet Yellen’s testimony could not direct the market away from the wave. The Friday relief rally in equities and the oil market had market close take on a little optimism and now we wait to see how much strength it will carry forward to the new week. Monetary policy has suffered a blow to its efficacy, its credibility and its once powerful ability to drive currency. When you consider the increasing levels of global debt and how that may damage growth prospects (how could it be otherwise?) and the increasing pressure on the banking sector with the shadow of Lehman brothers still hanging over them maybe we shouldn’t be surprised.

The risk aversion theme looks set to continue from the charts, whether it does so after Friday’s improvements or whether we just see a pullback will be decided by the market. One of the most important is the S&P 500 , the first in any reading of fear. Here is the daily chart showing the test of weekly support. Although it is messy, its a big level and thanks to Friday it held…for now. 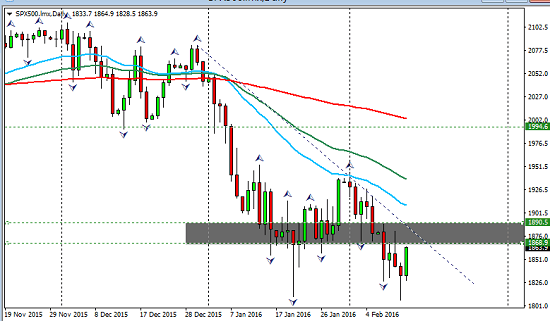 As for the other risk indicators: 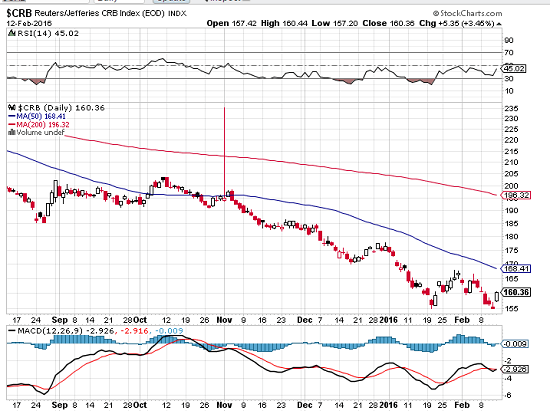 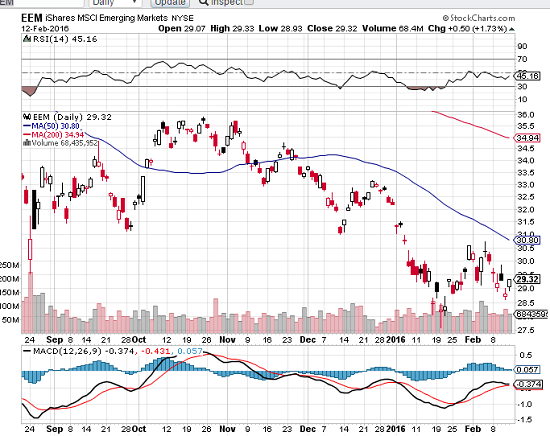 and also in the Vix, even so the move up was significant and the close well above 20: 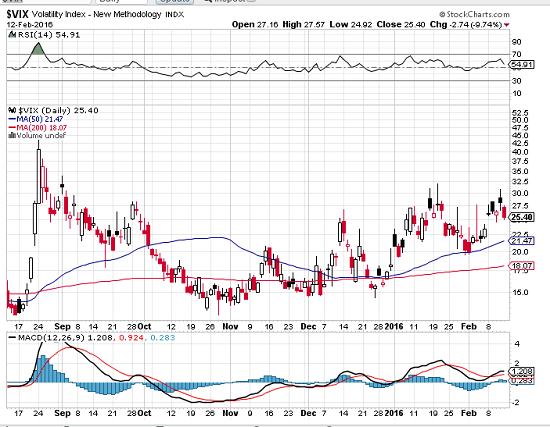 another shocking though relieved yield, The German Bund: 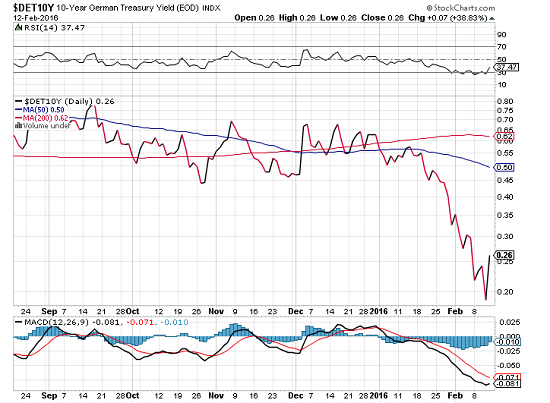 The weekend has been quiet on the news front .  We have to see if the oil rumour started Friday materialises into even a promise of further talks to secure a meeting. There is a long way to go and as the media remind us Iran may have stepped forward to discuss production but putting it into effect is another matter and as far as Opec is concerned not an enforceable one. The chips are stilled stacked on the side of obstacles and we should not forget that Saudi Arabia has the final word.

There are other events that could change the risk environment including some further stimulus from the BOJ to stem the strengthening of the JPY. An obvious effect of risk aversion there were rumours in the market last week that they were taking steps but we should be on our guard. How effective they will be, and how long those effects may last is unclear and another issue to watch in the context of the potential dilution of ‘policy power’

Assumptions can never be made about what is driving the market, our task is ongoing assessment under the bigger umbrella of risk trends. Recent volatility bears witness to the fickle nature of risk but with underlying weaknesses in the equity markets unrelated to fear, the difficulties facing the oil market and the headwinds of deflationary forces gathering momentum, lean towards more seeking of safe havens…eventually.

There are some major pieces of news which can pitch us in either direction:

There are some major pieces of news which can pitch us in either direction:

Monday, a holiday in the US and the Chinese markets are open after a week with trade balance data as well . Most importantly Draghi is speaking.

The market is fragile, patience has been tested a little too far and still we cannot be sure of the direction. That is a recipe for more of the same. It will be a day to day assessment of the drivers and the risk trends. Should there be any sign of continuing optimism the Euro is set for a fall. Even if aversion re-appears look out for the upcoming Draghi appearing soon and bear in mind too that as we have discussed the Euro is not a safe haven. it has just been behaving like one, and in averse circumstances the carry unwind will ultimately run out of steam The GBP is exposed to Brexit issues so not one for me this week. USDSGD is also a long. If risk aversion re-establishes then I will look for a another small position in the JPY, always wary of the possibility if BOJ intervention.

It will take at least one trading day to see which way the wind is blowing and as we know too well, that does not mean it is set to stay. It’s a vicious environment but we continue to hunt for the clues that will present profit opportunities and discipline is the name of that game.

In the medium term we will have to monitor the resilience of the banking sector and assess the damage that Yellen and co (the global co) have rendered on central bank credibility. Lets see if they scrape their way back to influence as they tackle the unknown journey which hopefully will not become the final frontier.