This report was prepared ahead of Yellen’s latest offering Monday evening showing why we have to wait for major events before choosing out trades. But first lets take a look at last weeks events 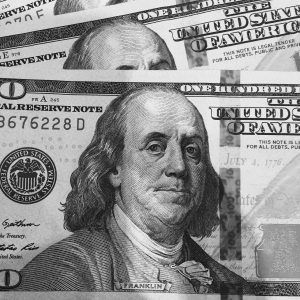 NFP strikes again and Yellen’s hawkish prose is put back into question, again. Her ‘wait and see’ attitude to data has exposed the market to further volatility on a more than disappointing addition to the non-farm payrolls. It was well short of the target. The market had waited and they did not like what they saw with the dollar selling off dramatically into the close. There were other significant and warning moves elsewhere in our inter connected galaxy of assets, with gold enjoying a rally on the back of the USD weakness.

It was a week that also brought a dull Draghi to the fore and another wait and see caution, no changes to policy and very little to the language.  In Vienna, a similar lack of substance at the long awaited Opec meeting with a spin of tolerance between the Saudis and the Iranians, the outward impression of calm control among the membership but particularly these two leviathans, but certainly no production ceiling.

Cracks in the global economy continue to reveal themselves with manufacturing data to disturb from both China and the USA. Add to that the small matter of a unpredictable Brexit vote which in the space of a week turned on its head and brought the GBP tumbling down. Has fear kicked in and what exactly are we looking at in the reactions we saw Friday ?

Risk themes are tricky elements and carry mixed signals but they have become increasingly more important to monitor. So what did happen Friday and should we be concerned?  Can we expect the equity markets to enjoy the prospect of another FOMC delay which now the market has priced in very quickly on apparently one piece of data?  Or will they run for bond cover and the safe havens on the ‘global view’? Lets take a look at the evidence. 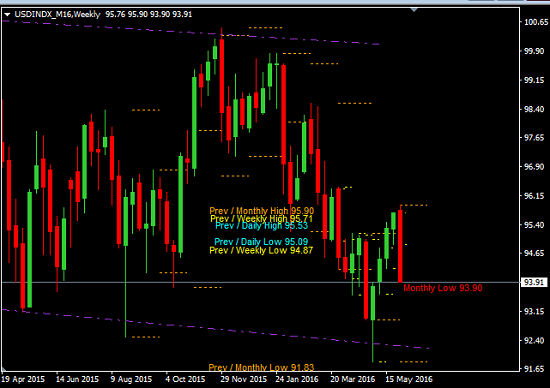 The news was not all bad with wages meeting the target and rising 2.5%year over year. What has caused more concern is the ISM services data also on Friday, and another miss at 52.9 from 55.4. Services is now a major part of the US economy so this was not welcome news either . This follows manufacturing PMI which beats its estimate at 51,3. Which is still the right side of the 50 barrier.

Tuning into CNBC and you will quickly be aware that a debate is raging on two levels. The first is that it is the low interest rates that are causing the problem with growth and thus data and should be raised, in the words of Rick Santelli, now and again in June. On the other side the view is you cannot raise when there is no evidence of real growth and economic improvement. Then there is a second debate, should the USA just fix their own economy and turn their back on the rest of the world or should they take the G20 line and work together , assuming the other participants will also toe that line. That surely is short sighted as the kind of mayhem and chaos that even a tiny rate rise, and I have even heard the suggestion of 12.5 basis points, from the Americans can inflict on the emerging sectors of the globe. And then there is the knock on effect that will inevitably filter back dangerously to their own economy. In truth the US are in control of the thin end of the wedge.

The US TNX yield dropped as the inversely correlated treasury rose undermining once more the Fed’s intention and their belief in them. A real vote of no confidence,charts courtesy of stockcharts.com 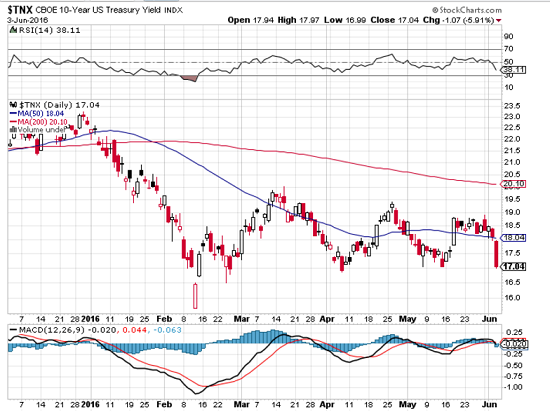 The S&P immediately sold off, an interesting reaction given the fact that FED tightening will put pressure on the US equities. This may be indicative of a more globally based concern by the market. They recovered quite well into the close, this is what part 2 Yellen did! 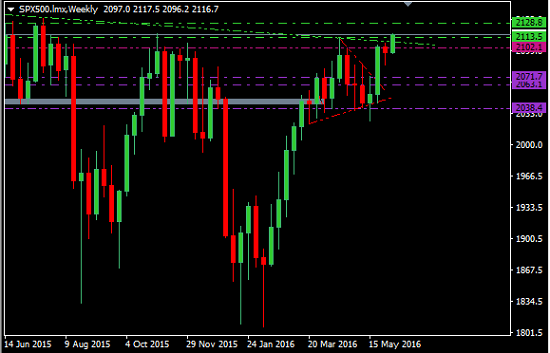 We have to watch this and let it play out but the fundamentals are the same. The truth is without global growth and with China still heading into contraction as confirmed in the Caixin PMI data this past week, how can corporations thrive and grow? This is painfully obvious in China itself and in every other global economy, leveraged money cannot of itself stimulate growth and recovery. Can the S&P advance, yes of course but anything sustainable above weekly highs look increasingly unlikely.

Increasing Probabilities:It all About Perspectives

Continuing the risk theme, it would be easy to suggest that commodities have fared well and saw another gap up as the week opened,

But the weekly is not so encouraging, and neither is all the gloomy PMI data;charts courtesy of stockcharts.com

Copper is one to watch here  in correlation to the Caixin, which is weak and a little ahead of itself;

Here is a fact to get our heads around; China uses 46% of the world’s copper.

Iron ore is another affected by Chinese dwindling demand .Short term optimism is one thing, but bear in mind also the Caixin PMI is falling after a trillion Dollars of stimulus. Whilst commodities can borrow an upswing on the back of credit, credit is a fickle and unreliable lender.  , 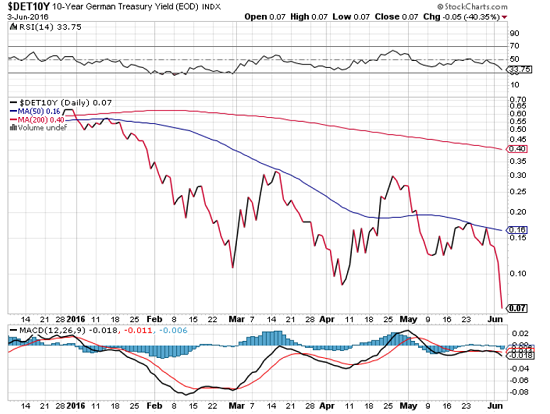 On the weekly its positively a nightmare unfolding; 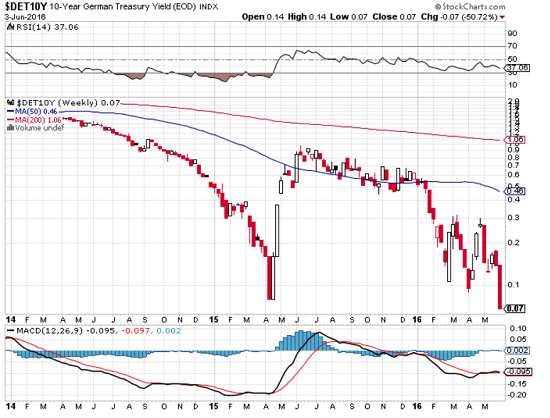 Just as a ‘by the way’, the German 5 yr yield last week dipped below the ECB rate of -.04 % (yes minus)  and technically not eligible, briefly for ECB QE purchases. It was only a moment but it is that close.

Bonds across the board were lifted by NFP data; 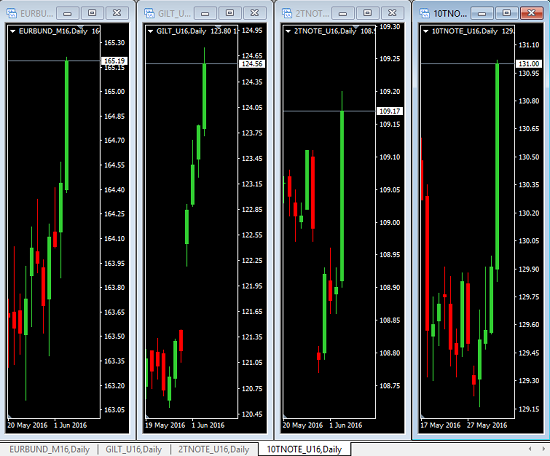 The other safety play was the impressive move in Gold. Safety or US weakness, or both? Something we will have to figure out. 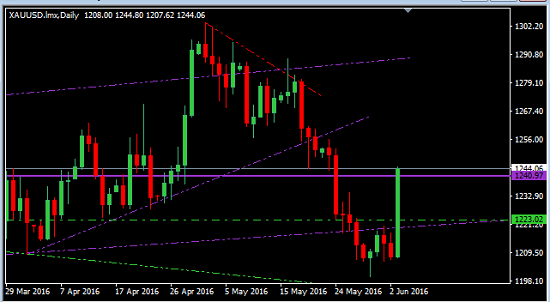 The other major global macro theme to watch is oil. Correlated as it is with the USD the reaction on Friday was subdued to say the least 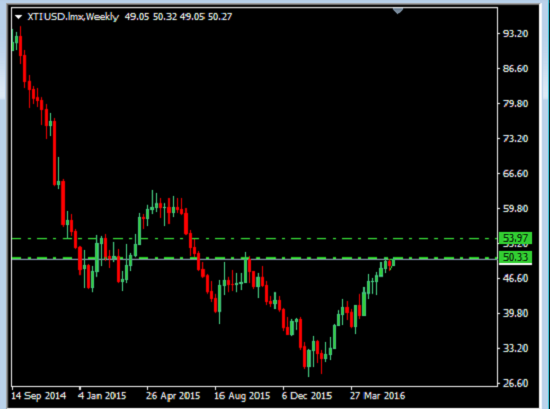 True that US production has fallen as intended, but true too that as the price stabilizes more US oil will come back on stream, US drillers are returning.

The arguments about sustainability of a rally above 50USD will continue but despite the rhetoric and the wave of tranquility from Vienna there is a glut, there is a dwindling supply issue, there is no production ceiling. If all the positives including USD weakness can keep it around 50 the bias is still against the possibility that it can lift it much further .

On the subject of demand, not only is there a question mark over global deflation and lack of growth but also a rise in electric cars…this may be a small point but interesting to peek into the future

Increasing Probabilities:The Week Ahead and Opportunities

Follow through and the USDX stand before the calendar as the context in which it will be viewed.

Thursday, Draghi again this time at The Brussels Forum. , USD unemployment, and a statement from the BOC.

The biggest catalyst is potentially Janet Yellen and as always critical to watch the USD index. Gold long’s are back on the watch list should we see some pullback,. The chances of a rate hike in the US are almost nil now for June and July is only 30%. Once the volatility is over and the non-hike properly priced in I shall be looking for higher levels to sell the AUDUSD and NZDUSD those obviously after rates and statements and only when commodities start to weaken again.

The USDCAD has been on the list for a while…let it do what it must do but the bias will be long when the dust is settled and that could take a while.

The referendum  has rendered the GBP very volatile and unpredictable thanks to the tight polls. The remain campaign do not have it in the bag but should they win then a good rally would be seen in the GBP which has been significantly punished. Brexit fears are not just about the UK The whole of the EZ is at risk and arguably more exposed to danger and instability than the even the UK. The risk of the rise of European nationalist parties should not be overlooked.

The UK GBP really is in wait and see mode now unless you enjoy the casino!

I am looking at the JPY strengthening. The USDJPY was a real shocker on Friday; 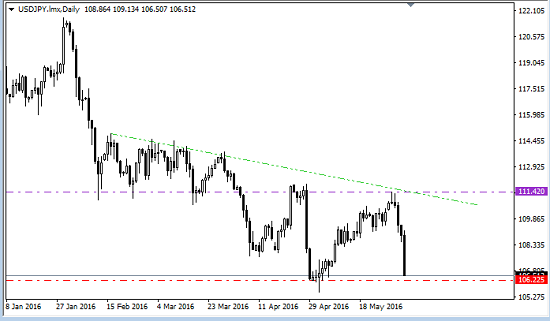 I like and prefer the AUDJPY as a risk pair and as a potential short. This has to wait for the RBA of course and has to be done in the awareness of Fridays inflows into the JPY will have deeply troubled the BOJ whose hands  tremble above the ‘further stimulus’ button. Keeping an eye on levels between 100 and 105 in the USDJPY is part of that scenario.

In this environment risk control goes without saying…it is always an essential in the trading plan but if you want to survive and better still make profits it is more important than ever. Reward seems a higher probability in the equities with the ever watchful eye on the grey area of sentiment.

We are watching my friends the thin end of the wedge, with central banks poised for failure, inadequacy,  global inappropriateness and the potential to send seismic fear waves around the market. Make sure you are prepared to protect as well as profit.