Ever had that feeling that somewhere someone is pulling strings and that suddenly randomness which in itself is a daily challenge in trading the financial markets has suddenly become just too much of surprise to rule out orchestration?

Central bank manipulation is one thing, and it has undoubtedly seriously distorted market forces as QE has hurled billions into the financial system to stave off deflation and stimulate growth. It has however all been very public. Or has it? Rumours are quickly spreading of a new conspiracy theory born in Shanghai at the last G20 meeting.

Since then, Draghi went to great lengths to increase QE and lowered the rate again but warned that the ECB were at the end of the path…at least as far as negative rates are concerned Last week Yellen shocked the market with a dovish tone in spite of signs of inflationary trends beginning to develop. The USD plunged. Conspiracy theories can be annoying and often misleading. But there is some basis for this one in recent history, with the Plaza Agreement in 1985 following a surge in the USD , whereby five major economies agreed on dollar devaluation. Another attempt to fire US growth and indeed global growth. So what did happen at the G20?

and she commented that the labour market is close ‘to our maximum employment objective’. Strange then to remark that she is not convinced inflation has ‘turned the corner’ Fodder for our conspiracy theorists.

The S&P 500 enjoyed the news with equities back to where they started at the beginning of the year. It is a dramatic V shape recovery and the issue of high valuations has not gone away. Also the almost identical pattern was seen July to October of 2014 illustrated here on a weekly chart: 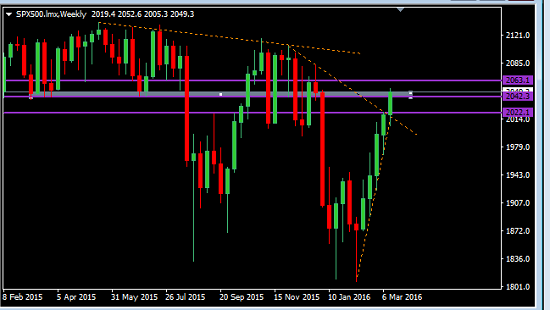 reason enough to be cautious.

The rally has been impressive but overhead resistance should be watched carefully for clues about its behaviour going forward:

The USDX also on a weekly shows just how the Greenback reacted: : 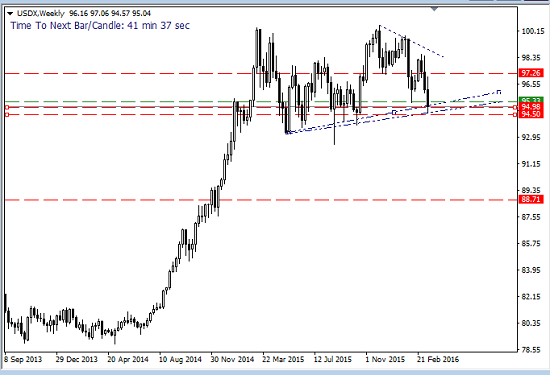 Conspiracies or not, Yellen was at pains to control the currency, or so it seemed. There are multiple reasons for such a course, including the danger of a strong dollar not only for the big exporters Stateside but for the countries with massive dollar dominated debt which hover menacingly above any recovery we see particularity in the emerging market sector. That could be another justification for a G20 secret deal with the global circumstances still very soft and inordinate amounts of easing and money still rolling off the presses. There is a lot at stake. At very least The Fed’s role looks much more like a global central bank than it does an exclusively US one.

I was of the view that the FOMC was ahead of themselves and underestimating global weakness back in December when the rate hike cycle started. It is undeniable that the circumstances now especially in the US are better than they were then …so why the change of tack? The language and reasoning is confusing so no small wonder that the word conspiracy has crept in to the media, including some sage analysts.

The inflation target is 2% and if it gets any traction the Fed will have to raise quickly and decisively to control it. That is a far more damaging prospect to the rest of the globe than lower for longer or a controlled gradual increase. Fair to say there are still reasons for caution. The next PMI data will be critical as the last ISM number slipped below 50 and that isn’t healthy. If it clears 50 again it may imply GDP growth.

The move of the Fed, has another perspective. The confidence and trust in the global central banks has been already been shaken significantly, by unexpected policy decisions as we saw from the ECB at the last meeting in 2015, by the apparent inefficacy of QE and particularly of negative rates as we see the Euro and the JPY advance despite the easing attempts. The belief in the effects of QE, the drying up of liquidity especially in the Eurozone which is necessary for QE to continue has left trust in monetary policy fragile at best. The marked lean by the Fed towards dovishness does not look likely to improve things and indeed has probably done further damage to confidence.

In that context Gold has become very interesting. Despite the rally in stocks and the commodities and the drop in the USD, classic risk on environment, Gold has continued to advance. Notice the reaction on Wednesday 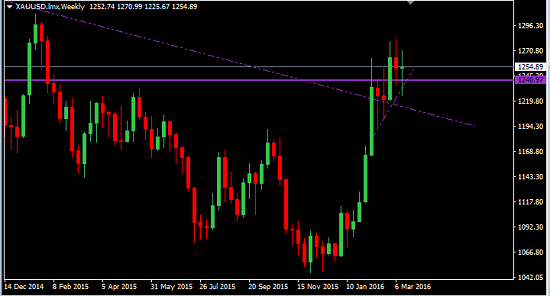 That begs the question why? Could it be that the market is finally seeing inflationary trends that could potentially get out of control especially with a dovish Fed prepared to take a step back rather than forward, or is just an underlying mistrust in the current rally and in policy generally?

Gold is something of a wild card. Traditionally a safe haven but it has not behaved consistently as such especially in recent periods of turmoil. It is also a classic inflation hedge. It is unnerving to see it in step with stocks and it feels as if something has to give. There is much to lean towards weaker stocks and stronger gold in the medium term.

The other area that demands our attention as it is a market driver and a major catalyst is crude. In the light of the rally in which it has gained 50% from its January low, we have to bear in mind two things. Firstly the last week has had a lot to do with the USD weakening. The agreement to freeze production has had its positive affect but have we fixed the surplus? Which leads me to the second point. This week for the first time since December the oil rig count expanded by one. It may not seem much but we have discussed before the possibility of rigs reopening as the price advances bringing back with it reduced demand and increased supply from the US. All of which leads us to question the sustainability of the rally. 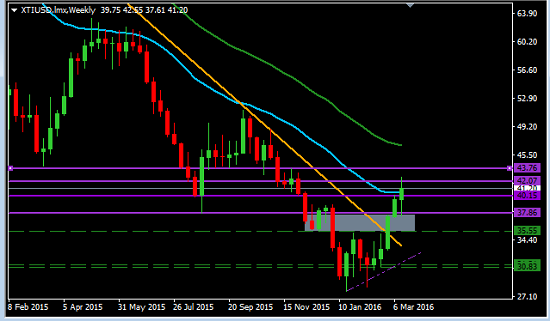 For now we have seen technical strength although a pull back to the daily 200 EMA and once again a place to watch for correction.

All sorts of clouds on the UK horizon. A soft budget which included some grim warnings and reduced growth forecasts failed to address the solutions save to dabble with disability payments (never a good idea) and reduce corporation tax to attract investment. It was seen as a budget to support Britain’s membership of the EU which remains fragile as the polls indicate a very tight contest.

The UK government have been accused of designing a way to cover the deficit, but in real terms the current deficit is around 72 billion GBP. Having said that Average earnings data last week, an inflation indicator edged up to 2.1% beating the estimate. There is more ahead this coming week in terms of inflation indicators. The FTSE is in an interesting place and there may be short opportunities in the  forex pairs if the catalysts play to the weaknesses. 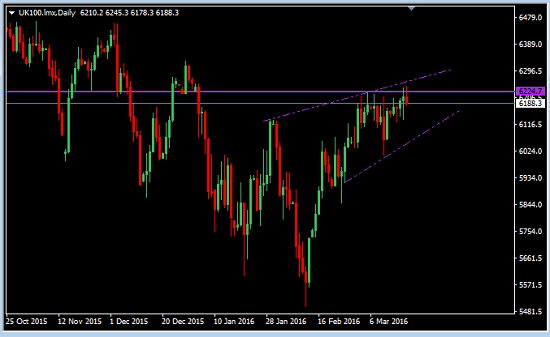 Forex Secrets: What To expect and The Week Ahead

Of course we are approaching Easter and many of the major markets will be closed as from Friday with the obvious liquidity warning.

On Tuesday the RBA has a say and PMIs will give us more clues for the Eurozone. Also there will be GBP CPI, which can be a catalyst as will retail sales on Thursday

On Wednesday NZD trade balance. Thursday is USD core durable goods and despite the holiday we will see the US final GDP which is always one to watch

It is a light week compared to the calendars we are use to but still contains some important data.. The need to monitor risk trends has in no way diminished especially in the light of central bank confusion, conspiracy or not and however perky the rally looks. There are many resistance levels to keep an eye in key markets such as Crude, Equities and the USD index and there we can sensibly prepare there for two scenarios. If there is a secret agreement, a Shanghai Accord, one would expect the USD to fall further. If there is not we could see a post FOMC bounce, after all the Fed is still planning the hikes, just not so many of them.

I will be looking for the Brexit related GBP shorts if the catalysts support them but if UK data is strong the EURGBP may offer a technical short and a mature pattern. In terms of the fundamentals there is a theory that the EZ will suffer more from a Brexit than the UK so even there we see a bias to short it. These are both weak outlooks so a speculative technical trade which needs a pattern break. S&P500 shorts, probably higher and with a good solid pattern will provide another opportunity. As for the USD, its all about the index, the playout of Wednesdays decision and the sentiment that surrounds it. The bias is up, on still divergent policy, but ‘it’s not over until it’s over’ so we will need a convincing hold of daily support.

Easter may give the markets the respite to take a well-earned break, reassess the risk on environment, prepare for risk off, try and decipher the mixed messages, (eat chocolate) and of course see if the plot thickens!