Oil, China, Monetary Policy. The driving gang of three. Draghi spoke, Carney spoke, oil rebounded and equities. But which came first and what drove what and does it matter? We operate in a highly correlated and interconnected market place and this year we have swung from crises to recovery in shorter and shorter time frames. Gloom and doom at the beginning of the week gave way to a happy rally into the weekend. Sentiment is all we need to understand but that is now no simple task and it can change on a dime, or on a euro for that matter. It no longer needs a month but a few hours to launch into a different direction. The market is choppy unpredictable and fear ridden despite any optimistic rays cast at week’s end.

Arguably the biggest of the three in the current environment. It is a chicken and egg question as oil affects the Chinese issues and they both influence global recovery, stagnation or financial collapse. They also dictate monetary policy as we have seen from central banks this week all concerned with the global state of play. The market sentiment is trying to sort it all out and struggling.

Oil remains the major theme. The latest rally may have been helped by the severe winter conditions across the Eastern US, but this week has seen warnings from the IEA of the oil market ‘downing in oversupply’ . With an oversupply of 2 million barrels per day and Iran ordering an increase of 500,000per day following the lifting of sanctions, the producing countries are in for more pain. The Saudi effort to suppress the US supply may be working as rigs fell again by 5 to 510 from 1317 this time last year, but it has come at a big price.

Venezuela are pushing for an emergency Opec meeting to discuss stemming the losses and controlling production and not surprisingly Iran are opposing it.

It has also had an interesting effect on equities used to hedge against such a crisis by the producing nations who are now dumping assets to fill the revenue gap. So it is not just fear that has crept into the globes major stock exchanges since the beginning of the year.

The oil chart for crude seen on a weekly perspective does not look as optimistic as Friday felt and with strong resistance above and the fundamentals still set against any sustainable rally; 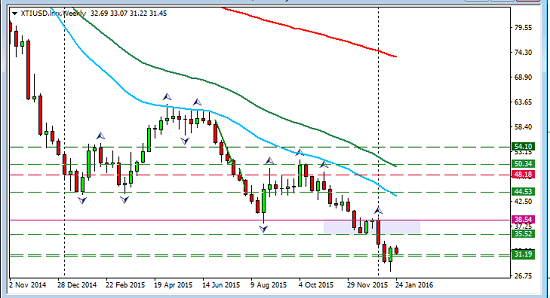 The week started well with the critical GDP and industrial production just a whisker shy of meeting the expectation. Arguments of massaging data on one side, equities were relieved but that was short lived. Chinese concerns as well as oil prices were raised by the central banks of the UK and the ECB this week and the fact is in such a super sensitive market the effects of news from China have an exaggerated reflection in price action. This is not likely to end any time soon. More liquidation from the PBOC could have one of two effects, reliving pressure or causing fear to turn to panic.

We were risk on as the week closed and by Monday afternoon back into risk off. It needs careful watching.

Chicken Or Egg? Lower For Longer

The same message from Mario Draghi and Dr. Carney this week. Whilst Carney takes some  flack for delaying any start in a tightening cycle, his reasoning is the same as Draghi, with a stock market rout in the first few weeks of the year and tumbling oil threatening the inflation target again, not just in the UK but globally. Draghi promises again to do what it takes…lets not forget he promised that last year and ended up seriously wrong-footing the market in November. Can we trust him if German resistance continues?

And what of the US? The FOMC have painted a much rosier picture than the bond market who have priced in one rate hike against the fed’s four. From where we stand the Bond market looks to be much closer and this week we get to see if Yellen and co get on the back foot with their monetary tightening policy. Here is the US 10 Year yield courtesy of stockcharts.com 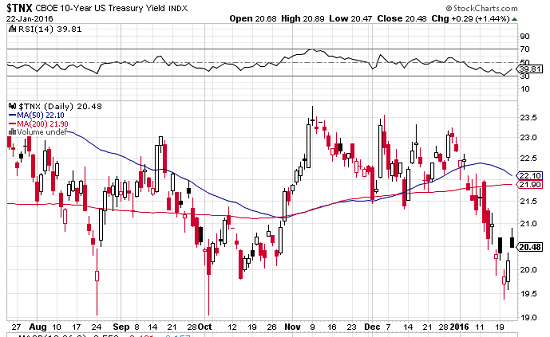 Inflation has increasingly challenging headwinds and the equity markets may well have read in from Carney and Draghi that the only option for central banks is not only lower for longer but more of the same. That could explain Friday’s ebulliance. Bearing in mind the trillions thrown in to date around the world have done little more than scrape inflation above zero, promises or even action might not quell fear for very long this time.

The week ahead will provide a whole heap more policy, from the US from Japan and from New Zealand. It could be another wild ride. The language for sure will be closely watched for clues and projections.

Does A Dead Cat Bounce?

I am not convinced a dead cat does bounce though it is likely from a great height!  As I looked at it at the weekend it seemed the stock market may have bounced too high for a dead cat response but the odds are a little stacked even if we were to see some risk appetite in the days ahead. Here is why; the equities particularly in the US are overvalued, they are vulnerable to the fear factor, the energy sectors are in serious trouble and will continue to weigh and finally another angle. Oil producing countries have used hedges against such a crisis as we have seen since June last year. Those sovereign funds are dumping assets to fill the revenue void and equities are the most liquid and therefore the first to go. 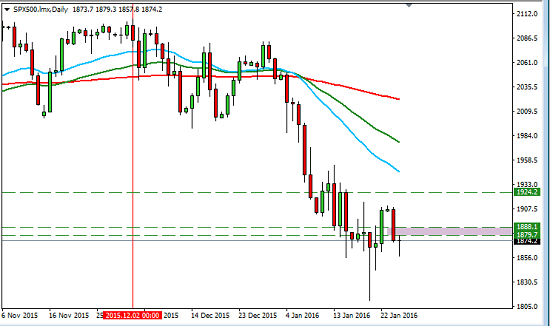 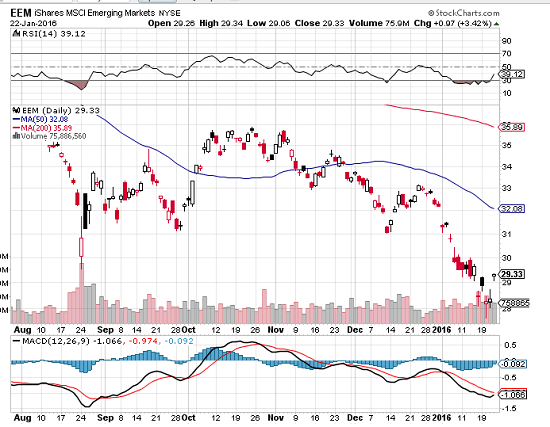 Catalysts and the Week Ahead

Draghi and Carney are both speaking again Monday and Tuesday respectively. AUD CPI an inflation indicator is also on Tuesday.

From Wednesday it get seriously dangerous! The Fed rate and more importantly the statement is a major catalyst, to see if the fed are closing their eyes to global; concerns or if they too are about to soften. The RBNZ make their decision the same day and their tone is also important. They have trade balance and we also wil see retail sales in Japan.

Thursday the drama continues with US durable goods and unemployment stats and the rate decision and statement from Japan.

If that isn’t enough for one day we will also have UK GDP as well.

Friday, no let up, advanced GDP from the US and GDP from Canada and Spain with EZ CPI data as well.

Plenty there to set the cat among the pigeons, if he isn’t dead that is!

A day to day assessment with swings to be expected with the week we have ahead. The market closed with solid evidence of appetite but it cannot be assumed. It is a nervous environment and therefore a sensitive one. If risk on returns we trade with it but always alert to the possible shifts. Tight risk control and even shorter term time frames may work better. I am still watching the JPY for short opportunities. In the meantime the EURUSD shorts and the EURAUD on the Draghi initiated expectation of central bank support, but only if risk off doesn’t re grip and it did seem to return after oil strarted to fall again on Monday  . Also waiting patiently for pullbacks in the USDCAD and the USDSGD for longs. The EURGBP was on our list for a short had the risk on environment lasted longer

There are major levels to watch, including this monthly double top in the USDJPY. The S and P has already visited weekly level.

We have a potentially explosive week ahead. Sentiment as always is the key and not wise to trade against it. What moves first and what affects what is a phenomena to watch but one thing is for sure, it will take the oil market to stabilises, before the equities and the wider financial markets are able . Sustainable rallies are not worth considering until we reach that plateau.  Until then be alert to more volatility more uncertainty and even suicidal felines.