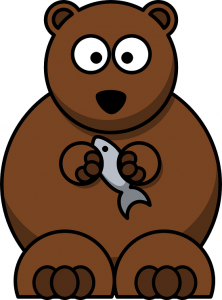 Some warnings have been heard in various parts of the interconnected market place and a very distinct risk-off sentiment has gathered pace as the week unfolded. Equities have been particularly weak, as concerns grow over corporate earnings and the warnings of a bear market resound in the media as the Nasdaq falls below a 200 moving day average.

The weakness spread into oil, despite the unfolding and devastating wildfires in Canada, and also into emerging markets and commodity currencies. These are increasing signs of weaknesses and lack of growth in the global economy. The final piece of the week’s calendar jigsaw saw a disappointment in the NFP data, the only real hope for the FOMC hawks, and it missed the mark.

As we prepare to look for opportunity that the risk environment may offer we can and should be prepared for a run for safety and how fast or durable that may be we can only speculate on. So now what Ms. Yellen?

Bear Prepared: Was The Market Right?

We will start with the Fed, a meeting coming up in June carries with it the speculation of interest rate hikes. I think it fair to say that after NFP that will recede. If you believe the market via the Fed Funds rate, there is only an even chance of a one rate hike this year, a far cry from the rhetoric we heard this week from member Williams that three hikes could still be a reality as the data pointed in the right direction in the labour market. Maybe he was a little premature!

Average earnings met the target, but it’s a miserable and stagnant 0.3%

There are some other stats from the week that cause concern, with ISM manufacturing falling below 50 into contractionary territory. That does not bode well for future growth and it is a number the economist used for prediction of GDP. On the brighter side the services PMI also from ISM showed a healthy 55.7 and as a large part of GDP this sector may inspire some optimism. But is it enough fro a Fed tightening even by one basis point? The market insist not as the US 10year note also bears witness to, a downtrend although off its week’s lows at 17.79: chart courtesy of stockcharts,com: 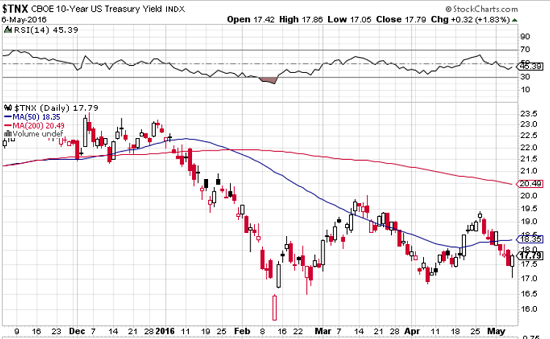 Despite the implications,the USD index has seen a push upwards after the expected volatility from today’s news, and certainly bullish week;

On that note, corporate earnings are even more worrying as the weaker dollar we have seen since December should have enhanced them. Instead US corporation earnings have fallen more than 5% and in Europe it is even worse. The S&P500 fell to a weekly support before it recovered into the close but the weekly candle tells the story:

There is a lot of room below and the weekly chart shows a disturbing repeating and repeatable pattern.

These were not confined to the US. In the Euro Zone, earnings have declined in the EUROSTOXX 600 by a wapping 18%.;

The Dax is falling, another recovery into the close but here is the weekly candle, no break of the trend line to the downside as yet; 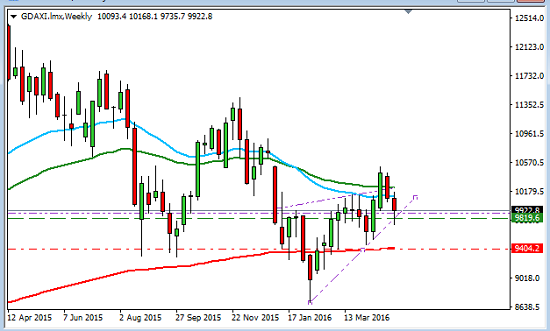 And the same concerns in the UK where the  FTSE dropped to its lowest level since March before closing up on the day (Friday), 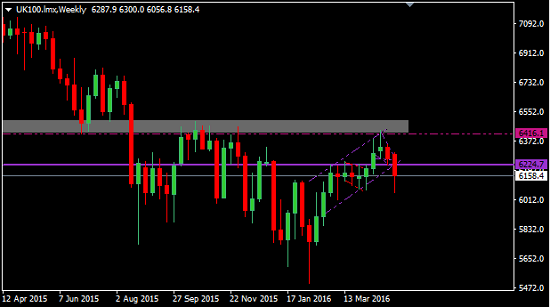 I read with interest this week that according to some opec members a freeze is not now required because the supply/ demand arena has adjusted. It certainly has, but only in the direction to weaken prices. Supply continues apace and Saudi Arabia is preparing for a shift away from oil. It is hard to believe that such a power driving commodity can be headed for real change but the Saudis are not alone in their thinking.

Electric cars are increasing in popularity and it is wise to remember that the auto sector is a crucial part in energy demand. With manufacturing industry waning we may be seeing the start of a monumental change. Interestingly the advent of electric cars affects platinum as well as half the world’s demand comes from conventional autos.

The requirements of climate change and environmental protection and the wave of pioneering technology that is following in its wake, are all add to a changing landscape for the crude market and that in turn will have profound effects on the global economy and the deflationary forces it is trying to resist.

For now, the weekly charts shows resistance holding. It may still have some room to run but how far and for how long? The fundamentals do not support longevity or sustainability; 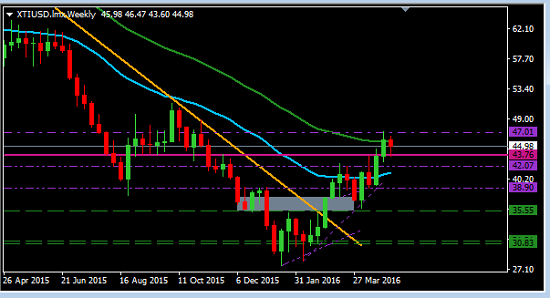 The ‘usual suspects’ were clear this week as commodities dropped away as expected from its recent rally;

Emerging Markets are weak as we see in the EEM ETF; 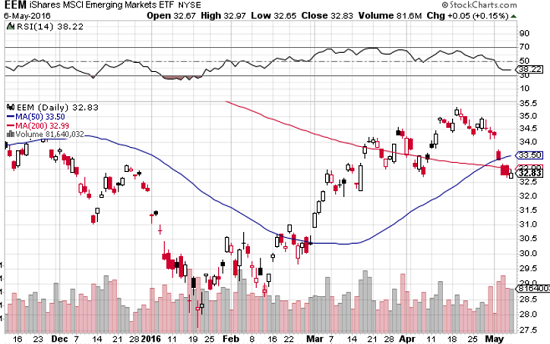 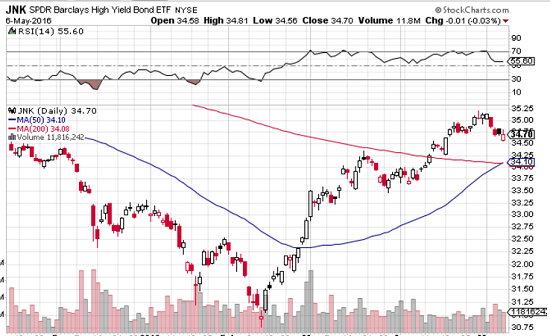 Yields are falling also in Germany: 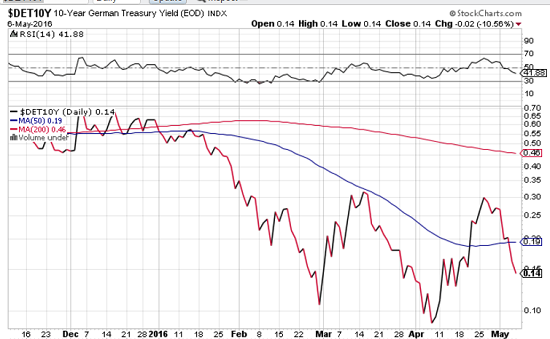 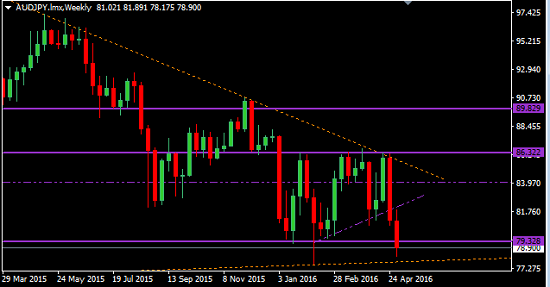 I keep an eye also on the USDJPY, since the speculation that the BOJ can intervene even though they stood pat at the last meeting. Rumours abound that they are watching 105 but some believe it could go as low as 100 before they leap into action . Either way this is a chart to watch; 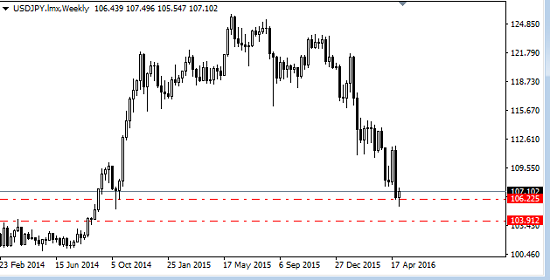 Gold is always interesting as analysts attempt to explain its behaviour. It can infer inflation fears but that is clearly not behind the present rally. It can also indicate the beginnings of panic. Another explanation and one currently use is that it reflects a weakened reserve currency (USD). The reaction to the NFP was bullish and the weekly tested the highs of the range, now back inside: 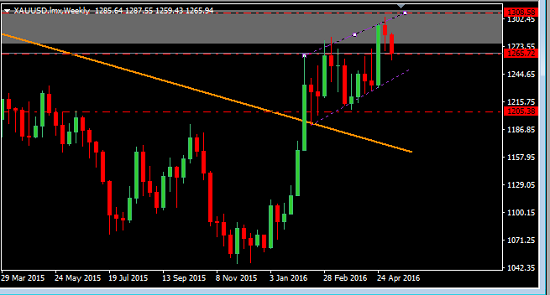 As the USD also recovered quickly to the long side after the volatility settled we may be looking at Gold as a safe haven.

Opportunities and the Week Ahead

The calendar starts with China on Sunday and Trade balance

Monday, watch out for the BOJ minutes this will be closely watched for clues, there are some euro group meetings as well

Tuesday brings More from China, CPI and PPI (inflation data) and in the global contect, crucial (if we believe it!)

The RBNZ is back in focus with a financial stability report. Wheeler will be speaking Tuesday and Wednesday

Thursday, Dr, Carney takes the stand in another super Thursday from the BOE. Anything can happen!

Friday GDP from Germany and the Eurozone as a whole, USD PPI and retail(more inflation data)

A number of catalysts present themselves in the week ahead, that require protection and provide opportunity. It’s double edged sword. My focus will be on the risk off sentiment. I am looking for a long in the USDSGD, which at last looks close

FTSE needs a consolidation or a pullback and also the S&P has short possibilities on a break of weekly support.

Also watching The NZDUSD for a short,

And finally Gold for a long

The news from China continues to feed into the view that deflationary forces are increasing. The Caixin PMI slipped into the zone of economic contraction as did the UK PMI, and the US teeters on the edge, Hope is not springing anywhere and even where there is no contraction there is only stagnation.

The USD is still in focus as a comparative against the rest of the global currencies and this week’s rally carried through Fridays trading despite the news with the USD advancing against the majors, commodity currencies and emerging markets as risk off tone entrenched. Now we have to see, post NFP , whether last week’s rally has follow through. Remember, if we venture far enough into the risk off environment the more likely the USD currency will be sought as a safe haven, whatever the Fed do.

What the Fed decides next impacts sentiment significantly with a strange scenario developing that could deepen the negative sentiment. If they raise rates, the knock on effect on debt laden economies is a serious concern. If they pull back on their own or on global weakness they send a negative message.    A ‘damned if you do, damned if you don’t scenario’. Risk off looks set to continue, and the bears may be in hot pursuit. Be prepared!