A Sad Day For France And For Europe 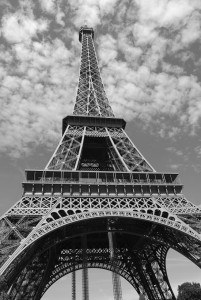 To discuss the economic consequences of Fridays deadly attacks in Paris so soon after the event, seems disrespectful. The emotional effect  in Europe and that includes the UK , and beyond, has been profound and a state of shock and sadness prevails. Of course it does not lessen attacks elsewhere around the globe, including Beirut the same day but in the heart centre of Europe it is a wake up call. It will have consequences for sure and they will impact already struggling economies of the Eurozone and could  further undermine the union itself.

Only last week a good deal of discussion centered around the Schengen agreement as the trend to recreate borders within the zone is on the increase as the migrant crisis intensifies. Sweden was the latest last week that is before France late Friday night.  Any hope of that agreement surviving was lost Friday evening in Paris. The outlook is one of more recessionary difficulties certainly in France, the second biggest nation in the zone.The consequences and the questions will no doubt be deliberated as time unfolds. Suffice it to say we should be on guard for a deepening risk aversion and a more negative sentiment as far as the market is concerned.

Here is review of last week’s events in the market. There were another set of more speeches statements and rhetoric, revealing the extent of the manipulations central banks can engage in. The day before the Paris attacks, Draghi continued in his dovish warnings on the willingness of the ECB to do whatever it takes to fire inflation and to prevent recession. It may now be that he has no choice but to inject yet more quantative easing into the market and even lower rates  again.

As the week came to an end, the sentiment had turned towards negative. With the S&P leading the way, commodities have fallen further with crude heading down to test its lows again and copper having broken its support, is closed at new lows. Its been a grim weak for commodities across the board and with all the talk of rate hikes (yes hard to believe in such an economic climate) gold joined them falling back to the August prices that in turn retested the 2009 levels. So where from here and can we really still expect the Fed to raise the rates?

We have seen the fear appear in some but not all of our sentiment indicators. The lead indicator however, remains to be Equities, and in particular the S&P 500. It is the S& P that has led the bulls and the fearless as money from the central banks flooded the market. It has outpaced  every other market so when we are searching for clues as to shifts in sentiment it does seem the obvious place to start. Last week the weekly chart shows the negative mood 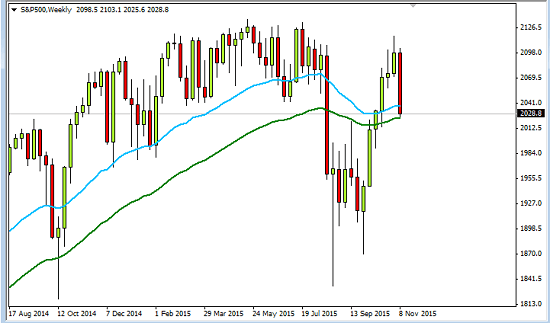 This week and rather unexpectedly following the weekend’s events it has pared half of those losses. One to watch.

The other area of focus during the week that included a lot of ’speak’ and speculation was the growing possibility of the Fed raising rates for the first time at their December meeting, and that has consequences for the stock market. However there is some way to go and the situation in France as well as continuing problems in China and elsewhere that can derail the FOMC plans. It did look a lot like fear even before Friday evening.

Here is the VIX at the end of the week’s trading, a faithful fear indicator and has just breached the magic 20 level. 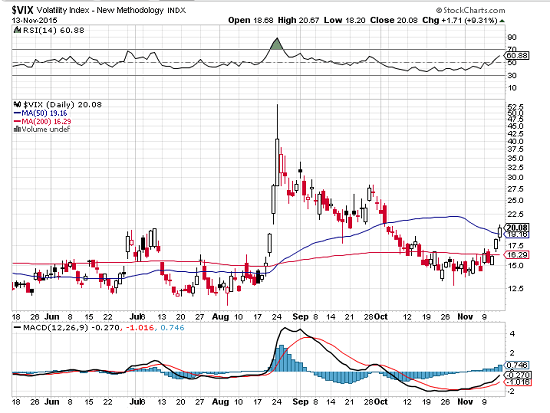 Commodities have reached their 1999  lows

These are the major players , not a happy scenario for our commodity set; 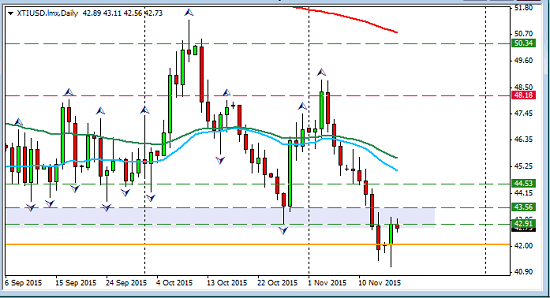 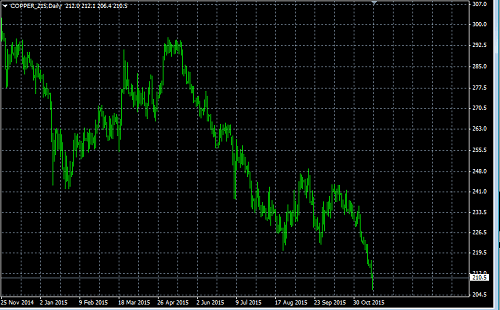 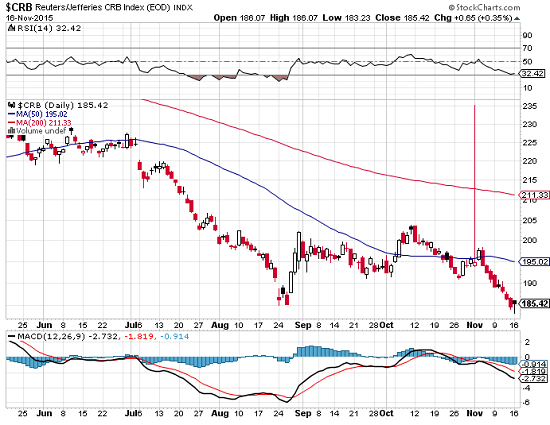 Last week I discussed the potential spanner in the works that China is to the Fed policy intentions. The threat grows, as we saw industrial production slip, exports fall, imports fell even further and CPI miss the expectation. Growth is not being maintained let alone increased. The forecasts are slipping with the data. This is a ‘big picture’ item that won’t go away and it not only has the potential to derail the Fed in the US but to deepen the negative sentiment that has for sure put in an appearance this week.

European problems will intensify politically , during last week Spain encountered problems with the far right Catalonians and the Portuguese government fell .There is a growing theme of lack of liquidity where ECB bond buying is concerned and in Portugal they may well lose their safety status becoming un suitable for ECB buying. Friday’s events hold the potential to drive politics further to the right,  bringing another de-stabling factor to the Eurozone and once again sovereignty will be in issue as individual countries tighten up their home security.

The oil market will continue to be scrutinised as we emerge from the weekend. The International Energy agency confirmed Friday that the record oil glut is likely to continue with no reduction in the Opec sector and the US inventories still growing;

What effect the Paris attacks will have remains to be seen but it may not be the geopolitical event to trigger price rises and as it threatens further the fragile economies in the Eurozone it may will have the opposite effect. Last week we were trading back near the six year lows.

The G20 meeting in Turkey this weekend will be focused on France and as soon as Monday we will hear from Mr. Draghi and his comments will be of extreme importance as we look  towards the end of the year. He re-appears on Friday morning at the Euro Finance meeting in Frankfurt.

There is more inflation data this week, with NZD inflation expectations and GBP CPI and US CPI and core CPI all onTuesday. NZD also has the dairy prices.

On Wednesday we will see the FOMC minutes but subject again to new perceptions and to being taken over by events.

Canada has CPI data on Friday.

It should be added here that despite recent hawkishness the speculation about and the intentions of the FOMC may have been impacted by this weekends sad events. Certainly the potential for volatility has increased but I think it safe to say it is not just about data and that the geopolitical global situation is back higher in the Fed priority watch list.

There are catalysts but so much at stake that the wisdom in waiting for at least the first two sessions , London and New York is obvious.

Opportunities remain in the S&P short positions, the USDSGD as emerging markets outlook is still very poor, and the weakness of the commodity set, especially against the GBP which we discussed last week as likely to follow the US.

This weekend our attention has been drawn to France and what consequences that may bring of course is uncertain. We cannot continue to assume that the US will forge ahead with their policy intention to tighten especially after such a grave geopolitical event and the continuing pressure from China on the global economy. Even if they do, what are the possibilities of it continuing now? The monitoring of sentiment just became even more important.