A Hill Of Beans

From fragile Opec ‘agreements’ to the growing piles of debts, Cameron’s ‘deal’ with the EU attempting to avoid a Brexit and a never ending global mountain of QE, the sense of futility in outcomes hovers in the background of what actually turned out to be an upbeat risk-on week. At least in comparison to what we have seen since this year began.

The bear market visited briefly the week before was left behind on fresh talks and a paper thin alliance among Opec and non opec nations to cap production and at least protect the $30 price barrier. By the end of the week, with Iran and Iraq making noises but without any commitment and probably none in sight, oil slipped back below the target, with WTI closing at 29.72 . As the driver of the week it had prompted a bounce in the S and P index but by close it had fallen from daily resistance , also trying to digest US data, which ticked to the positive side.

There are those that believe that oil will bounce up strongly if an agreement is struck …a coiled spring argument. The problem is the recent talking about it failed to spark any momentum and a back fire is always on the cards if Iran refuse to co-operate. There is a chance that the Saudis and the Russians know that the chances of a uniform agreement are feeble but at least if it fails they can point the political finger towards the Iranians and in the meantime support the price with intentions.

Does it help? If prices are frozen at January levels the glut does not go away and demand is unaffected in the short to medium term, so at best it will support the lows and propel some excited up surges. It is hard to see any sustainable rally resulting.

The views on Iran are split, not surprisingly, but the odds remain against their commitment having just surfaced from sanctions, feeling behind the crowd and already moving significant quantities from their floating storage.

This key commodity was in control last week and the correlation with the S and P remarkable:

This is an arena of potential black swans with geopolitical threats included. We have to be prepared for even a small chance of an Iraqi/Iranian epiphany, although it doesn’t look likely any time soon. Who knows…these are strange and unpredictable times with political undercurrents hard to ascertain let alone understand. Be prepared for the unexpected.

Russia is a great example. With increasing economic woes visited on their long suffering citizens, and a massive war budget (another web of political intrigues) they are ripe for anything to help push the oil prices back up. Buddying up with Saudi Arabia looks great on paper and no doubt benefits the propaganda machine.

What transpires in the market directly affects equities but also the underlying risk trend, an obvious factor in the last few weeks with the benefit of our friend, hind-sight. We can expect that trend to continue among the other major but inter-linked  themes such as the dilemma faced by the Fed with their monetary policy. More on that subject below. Suffice it to say, the focus will continue as will the sensitivity of sentiment to this crucial market.

Commodities overall are still in a downtrend: chart courtesy of stockcharts.com 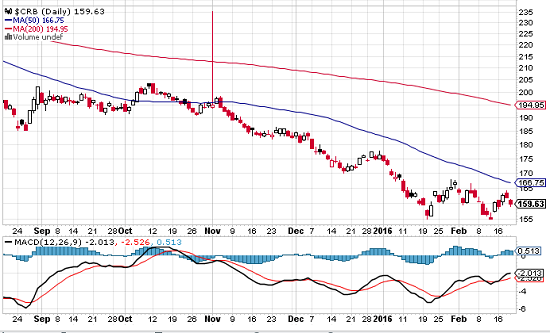 A Hill Of Beans: Deal Or No Deal

The UK Prime Minister has managed to pull off a major schism in his own cabinet. Nice one Mr. Cameron. The so called deal is now the point of discussion as to the Brexit issue and another potential back-fire. Right now the debate is whether or not the deal is good enough not whether he UK will be better off in or out.  The exit campaign will now have some strong support so here we can look for more politically sourced uncertainty. June 23rd is referendum d-day.

The concern grows within British businesses of Brexit and of course the financial sector with the UK seen as the financial capital of the world a lot is at stake with a sector that has buoyed up the UK economy. The arguments will be dogged by fear tactics on both sides, that is already well under way and with the political posturing ahead of Cameron’s departure (even though some way off the the vying has begun already) by the key campaigners there is not much chance for a reasoned debate about what really is best for the UK economy.

A Hill Of Beans: Bears And Bulls

Us Equities have been in step with the vacillations of the oil market as we have seen in the chart comparison above. The weekly support was successfully defended but there is a long way to go and it’s vulnerabilities are not limited to oil pressures but also to the Fed’s monetary policy.

In that regard there is a sense of damned if they do and damned if they do not. If the Fed see domestic costs rising they will be back in the rate hike path. CPI came in as expected but the core did tick upwards.

If the ongoing data does not support this uptick, then the Fed may have to back track. And there is still a big distance between market predictions and the Feds policy path. Any Fed reversal in policy could trigger negative risk trends and also a renewal of the equity slide so recently recovered.

The equities lines are drawn in the sand . The bond markets saw some selling with the yields recovering from last week but still looking weak: chart courtesy of stockcharts.com 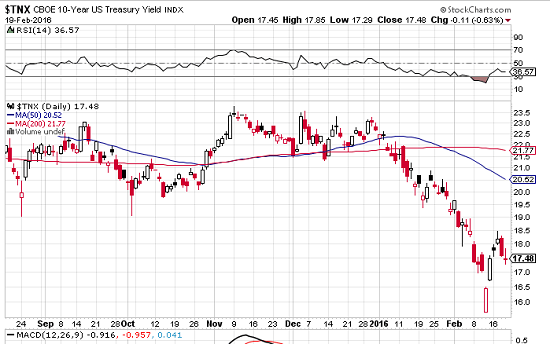 Depressingly weak for the Euro zone is the state of the equivalent 10 yr German yield: 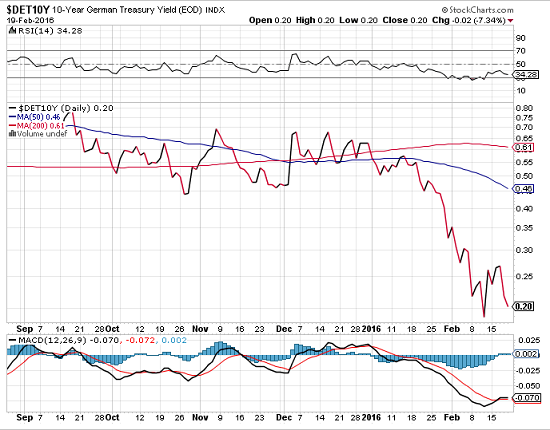 The minutes revealed last Wednesday the dovish undertones holding the Fed back from rate hikes. The CPI core number, announced Friday,  up 2.2% over the last year, may shift that thinking, but for now it is not much to go on and even if one rate hike is achieved this year there is still the gap with the market expectation which will fund some more volatility one way or the other.

This week will see if there is follow through in the data as we wait for the PCE,personal consumption index,  upon which the Fed judges inflationary trends. Recently these two have diverged and that has to diminish to confirm an inflationary trend.

We will have to wait for Friday for that data together with the preliminary US GDP. More potential catalysts.

The USD index on a technical assessment doesn’t look strong but again the levels are clear enough to keep track. The speculation will continue and unless there are clearly defines catalysts, negative or positive then the USD may remain a while yet without direction. Let us see what Friday brings. 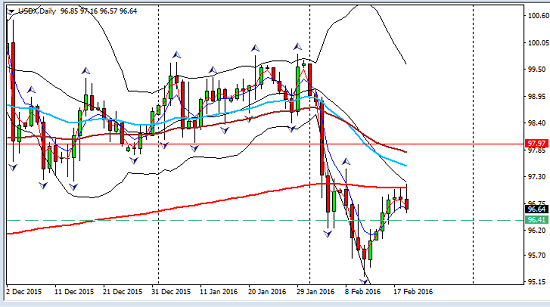 Friday, US GDP and PCE

On Friday the G20 will begin there two day meeting and have no shortage of topics including Fed policy, global economy, oil, and a migrant crisis. Two days doesn’t seem a lot and maybe another hill of beans in the making.

Shorter term positions are more suited to this environment of directionless markets and uncertain traders. There is plenty to feed into this theme. If risk on makes another bid, the EURUSD will present shorting opportunities. The USD will be on the long list if the index can break above the 200 EMA. If you want a pair more immune to the fundamental shifts the AUDNZD consolidation may bring a break out opportunity.

For the bigger picture themes, more is required to establish a longer term risk trend and longer term positions wherever that may head. It is a year which will bring potential political upheaval not just in Europe and the UK but in the US too with the presidential fight on and the outcome to look forward to!

I am still leaning towards the resumption of the bear trend and for sentiment to deteriorate and that requires watching those lines in the sand that we have delineated. In the meantime the global bean mountain is pushing higher.