Another rate cut and another currency appreciation. Following in the footsteps of the ECB and once again their decision anticipated by the market, the RBNZ cut their rate last week to 2.5% but the NZD did not fall as one might expect for two reasons. Firstly a large part of the cut had been priced in since the RBNZ had been transparent enough with warnings and forward guidance and also because the tone and language was on the hawkish side.

The market continues to increase its focus on the statement more than it does on the decision. Take note as we approach the long awaited and much discussed Fed decision this week. Janet Yellen too has erred on the side of clarity with the market…unlike the ECB’s Draghi as we saw with the meteoric up moves in the Euro still in recent memory. She has consistent requested focus to remain on the forward path of the tightening cycle and how gradual that may be will no doubt be a subject she covers in great detail.

The story of the week however lay in the break and tumble below $40 of the price of crude and a further slip in iron ore and commodities generally. There was a clear warning of risk off by Friday’s close.

The Fed decision comes after a week of increased volatility and the signs of significant fund moves and equity dumping. The S&P slipped just shy of 2% in Friday’s rout and 3.8% for the week. It has since pulled back and now like all other sectors is waiting for the Fed and is unlikely to move much until then. 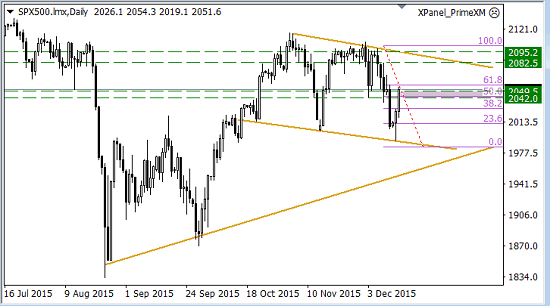 The Dow suffered a similar fate. So the FOMC may be damned if they do or damned if they don’t..well the equity markets that is. A push up in the rate would be expected to impact the stock market negatively as liquidity starts to drain but if Yellen tries to buffer the effect with a more dovish approach to the future path, it may have the same rather than the opposite effect. In the context of global struggles, Chinese contraction and commodities sliding  dangerously further, it doesn’t look likely that their could be a rosy outlook for growth rates in the US enough to justify many more increases. The accommodative language in that event, may encourage the equity ‘recovery’ but could  well just have the opposite effect if the risk environment deteriorates.

We should be well past the habit of guessing the content or the reaction to it, of Wednesday afternoon’s meeting and any strategic plan for the week should have avoided exposure to the US major pairings.

Oil prices had there worst ever last week. The price closed out at 35.62 with the International Energy Agency (IEA)warning that the over supply issue could get worse next year following the Opec decision last week not to cut production. A free-fall effect may continue as we look forward to the Fed if the rate hike goes ahead. Energy companies lost 3.4% in value last week.

This chart shows the Friday close, although it has pulled back ahead of the Fed: 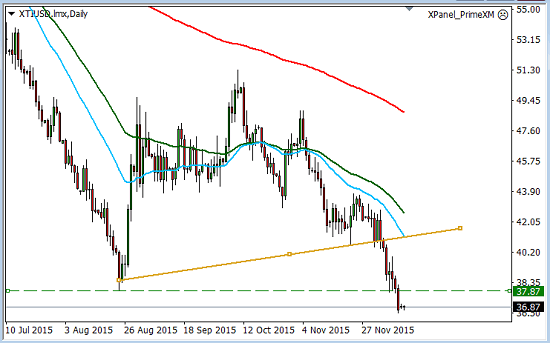 and the commodity index by the week’s end:

It was a remarkable week, with the move down in oil, the higher yielding bonds started to sell off , as mutual funds started moving positions, This included the likes of  HYG, a corporate bonds fund and EMB an emerging market fund. What prospects for them on the heels of a fed move?

Of course we know that emerging markets are vulnerable to further losses as their economies struggle with USD debt burdens.

The following chart is another emerging market EFT… MSCI a product of Morgan Stanley and Capital International, chart courtesy of stockcharts.com: 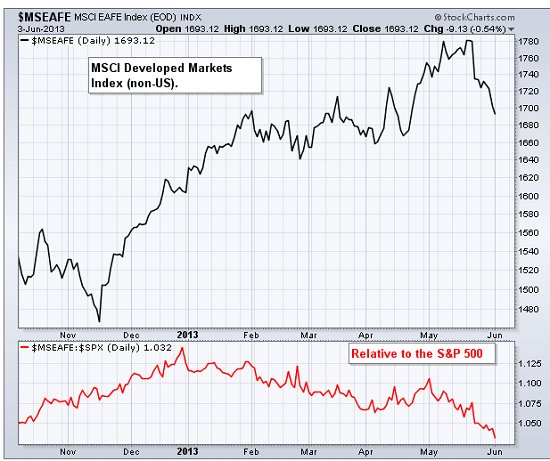 The Vix jumped convincingly into fear territory, gapping on the initial move and closing over 24 and well beyond the 20 marker, it has checked back since but all eyes watch this one on Wednesday: 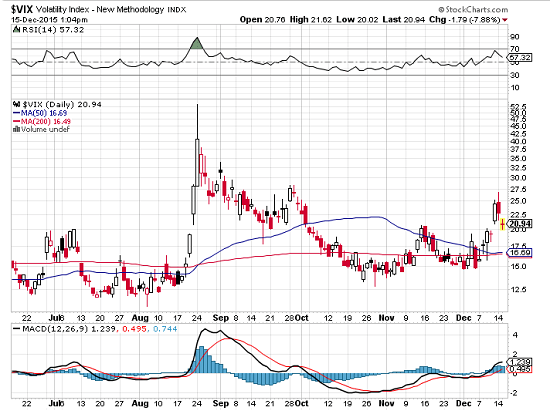 The commodity index (above) likewise but downwards.

Bonds pushed up while equities pushed down, a classic risk off correlation:

The US 10 year slipped as bond prices rose but again pushed higher in the new trading week. This has been volatile and another one to watch: 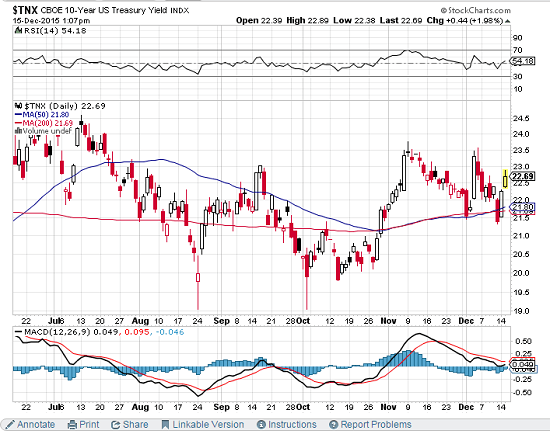 The AUDJPY, our sentiment monitor pairing produced an engulfing bear candle on a weekly chart. On the daily perspective one trend line has been broken to the downside whilst another was threatened: 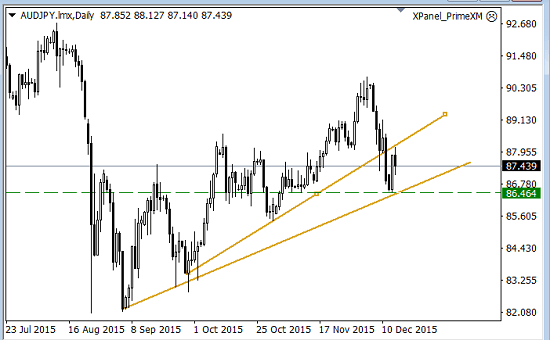 How the fear element will handle the week ahead remains to be seen but the level of uncertainty looks likely to maintain a negative sentiment at least for the first few days. It will be a case of one week at a time, but with Christmas only two weeks away there is a liquidity issue as well, which brings its own risks..

Kuroda at the BOJ was on hawkish track. The Japanese QQE, quantitative and qualitative easing , that is to say massive asset buying program was doing its job encouraging loans where they are required and leaving behind the need for a rate cut into negative territory.. The GDP edged up as well and bearing in mind the risk environment  JPY strengthening look set to continue.

In the UK, the picture is different. The influence that the US can have is significant and if the tone is one of caution and a soft forward projection, the BOE might well be put back up to a year for their own rate hike. Carney accepted as much in his soft statement on Thursday, “The outlook for global growth has weakened since August. Many emerging-market economies have slowed markedly this year, and the committee has downgraded its assessment of their medium-term growth prospects.” The domestic strength to which he referred earlier in the statement, was not so impressive, as manufacturing missed the estimate.

Retail numbers and labour stats in the UK are in the diary next week and are ones to watch out for. The UK is still on the ‘right side ‘ of the policy curve in terms of hiking rather than cutting and may have some long opportunities against the commodity currencies. But not yet! .

The threat of the Chinese situation continues although last week’s data, including Industrial growth and CPI surprised to the upside with only the trade balance missing the mark. With a skeptical eye of the numbers we have to stay aware of the impact of this economy across the entire globe and the effect that a US rate hike might have on its growth and future policy.

The Fed will dominate the list and the media as well as the impact in the financial markets. Draghi speaks on Monday and it will be interesting to hear his perception of the last statement and its impact. The EZ have PMIs on Wednesday in their two major economies, France and Germany, The UK wait for CPI, Tuesday, labour stats Wednesday and retail numbersThursday. Also Wednesday is NZD GDP. The BOJ will make their policy statement on Thursday.

It is another potentially wild ride ahead and not one to toy with. The JPY has long opportunities in the week ahead and shall be my focus Monday and Tuesday. The USDSGD is still of interest after the Fed meeting and the commodity set on the short side. Whether paired with the GBP or the USD it will have to wait the Wednesday FOMC watershed and thus  post holiday position.. Next week is the start of the Christmas holiday so this is the last week to look for any trade opportunities. At least we will have a few quiet reflective weeks to digest the FOMC decision along with the Xmas pud! How Yellen handles this will be very interesting as she is holding an equity time bomb that she is very well aware of. We will get to see the real strength of the last quarters risk appetite and whether the resilience of those last few months can stand the final test of the year.

Whatever happens 2016 is set to offer up some lucrative opportunities for those aware and ready for another dose of macro catalysts and market drivers and have the risk management tools to weather them.

I will be back next week with a review of events before the partying begins!