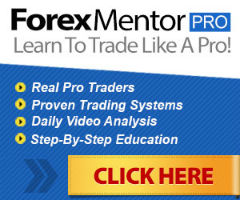 This is a post from the members area of my forex mentor program: www.forexmentorpro.com which was first posted on the 11th December BUT is still valid this week:

Our resident ex hedge fund trader, Fotis Papatheofanous is winding down for Christmas but has a a few major moves on his radar and a BIG word of caution re next weeks Fed report.

Fotis trades primarily from fundamental analysis and then uses technical analysis to fine tune his entries, stops and targets. In this section : CLICK HERE you can find out more about him and his strategy. Also check out previous posts here in his blog to better understand the mindset and practises of a professional trader and analyst.

Hello, my friends! I hope you are well! As the Christmas holidays approach, it is becoming more and more difficult to stay focused and trade. At these times I am looking for shorter term trades before I also take a couple of weeks off.

Even if you want to trade it is becoming more and more difficult as liquidity dries ahead of the holidays. For example the trading range in the US dollar Index has become very tight, it has gone 14 consecutive days without a 0.3 percent or greater change, the longest period of inactivity since June 2007.

I believe the markets would be completely dried, if it wasn’t for the FED’s meeting next week. There is increased speculation that the FED will begin tapering this month. This scenario was further supported by certain FED Committee members and comments they made to the press. Richmond Fed President Jeffrey Lacker said December Taper discussion was a possibility, and that he wanted to telegraph further plans of quantitative easing. St. Louis Fed President James Bullard suggested a small Taper at the upcoming meeting could signal the FOMC’s acknowledgment of the improvement in labor conditions and still offer room to maneuver. And, Dallas Fed President Richard Fisher shook off any of his dovish misgivings of recent months when he said the costs of QE far exceed the supposed benefits, and he went on to suggest ending the program as soon as possible.

So basically the main scenario that was signaled on Monday was that tapering could begin next week.

The effect in the markets was that the strong trend in the USDJPY pair lost momentum and more sellers appeared at the High’s. Actually the JPY pairs gained momentum as this is considered a safe haven currency against a possible tapering. Eventually JPY strengthened as well against the EUR and that caused the EURJPY pair to retrace a little bit.

There was another story that dominated the EURUSD pair. Lead Senate Budget Committee officials , Patty Murray and Paul Ryan, announced a budget deal which will reportedly will help the US to avoid a government shutdown in early 2014, ease indiscriminate sequester cuts, and reduce the budget by $23 billion. That news caused the EUR to move higher against the USD, as this piece of news ads to the case for a December tapering.

How many times have we told you that it is the news that moves the markets!

From the above information, you can easily understand that the main theme recently that affects the sentiment amongst market participants is whether or not tapering will begin now or later in the year.

A Bloomberg survey show 34 percent of economists expects a reduction in the stimulus program this month (from 17 percent in November). The Reuters poll reflected 22 percent of Primary Dealers suspected an early Fed move. And, even a look to search traffic shows a surge in interest in the term ‘December Taper’ as ‘March Taper’ fades to nothing.

Now let me show you what I “fear” the most!

According to speculative positioning figures, retail traders recently shifted to their most bearish exposure on record (nearly 5 shorts per every 1 long position)!

We saw a very similar sentiment extreme through late October when the Euro traded towards highs of $1.3830.

However you can notice from the chart below that although the retail public has never been so aggressively short against the Euro, the longs remain at very low levels compared to previous times when Euro was at its high levels. This could be an indication of profit taking instead of aggressive selling. 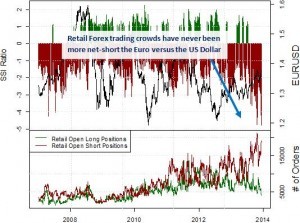 But when the retail public, the same public that on average lose most of their money within 90 days, has so strong views about a certain outcome, I smell blood!

Can you imagine what will happen if the FED doesn’t begin tapering now? All these aggressive shorts will run for cover, strengthening the trend even further!

The same pattern occurs in the GBPUSD.

As GBP moves higher, all the retail traders are trying to call a top! And as the market moves higher, they run to cover, causing a stronger trend!

I hope this will become a valuable lesson for some of you, that you will avoid in the future.

Now the million dollar question is what do we do with these information? What should be our game plan for next week. Obviously the decision by the FED to taper or not will be the major event and the biggest catalyst in the market. Personally I don’t wish to speculate on the FED’s actions. That would be gambling and we are not gamblers.

I would keep a close eye on the Nikkei. If the Nikkei is strong, that would mean that US dollar is strong and I would look to buy USD strength and dips on the GBPJPY pair. If I see weakness in the Nikkei, then I would look for further JPY strength. It might sound boring, as a battle plan, but it is the safest that I can recommend at the moment.

If we didn’t have such important news next week and if it wasn’t the Christmas period I would tell you to look for potential Euro weakness as this currency has hit a 5 year trendline that is acting like strong resistance and also to look for a potential top in the EURJPY as the pair has hit an important Fibonacci resistance. 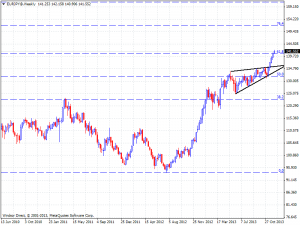 However it is not prudent to go against the trend simply because we have found a resistance point. We must wait for a consolidation pattern an indication that buyers are cut off! On the chart below you can see, EURUSD monthly chart. You can see it is only a few pips away from a very important 5 year resistance trendline. Let’s see how it behaves around that area and then act accordingly. 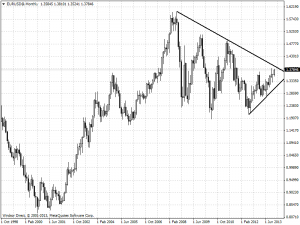 I will probably make a special report as I have more news later in the week.