Global Macro-Economic Outlook and Trading Opportunities by Fotis Papatheofanous. This is an example of the detailed global macro economic study that Fotis makes for his high net worth clients, brokers and his own trade plan. He very kindly gave copies to members of my forex mentor group a few weeks ago and has agreed to post it here completely free of charge. Many of the trades that he is looking for are still valid so you will have a chance to profit from his analysis and more importantly give you a feel for how different economic events, news, data releases etc affect currencies

This report usually costs clients, many, many $100’s so make sure you read it all carefully!

Last week Fotis Papatheofanous showed you how an experienced hedge fund trader, Anton Kreil, uses and teaches a “top down” approach to his trading of all markets. Fotis takes the same approach as a result of his previous experience trading for a hedge fund.

The following is a current example of the detailed analysis Fotis supplies to high net worth clients and brokerages. This information costs more than a lifetime membership to Forex Mentorpro !!

He then uses this global macro fundamental analysis to show him where he should look for trades in the coming weeks and months and uses technical analysis to pin point his entries, stops and targets. He recently reviewed the course of Anton Kreils and tells me that students who complete the course will be able to do their own top down analysis, combining that with the technicals that we teach you will have the best opportunity yet to become successful traders of futures, shares, etf’s, commodities and forex.

Here is the link to Fotis’ review of Antons program: Do you REALLY Want To Be A Successful Trader?

To see the images and graphs larger, click on them

We begin our analysis by examining where we are in the business cycle. This offers a great insight for current economic conditions and the likelihood of what will happen next. When trading from technical charts the goal is to find repeatable patterns, in the chart below, you can see the ISM Manufacturing index, with the year over year percent change in the SP500. The 3rd pattern is now well advanced and if it follows the previous two swings the “clues” tell us that we could be on the parapet of yet another global recession. That is not to say that it will happen next week, but it certainly creates a bias for our predictions of future movements over the near to mid term.

This ISM/SP500 relationship has been one of the most successful predictive indicator of the business cycle since 1945 so its certainly something that we should not ignore.

If someone takes into account where we are in the cycle and also add the fact that the last couple of years most economic indicators are steady but show a continued deceleration in growth then this is something truly to worry about! Whilst many of the numbers are  still positive numbers, growth is losing impetus.

The next chart shows the official unemployment figures, excluding that huge group known as “discouraged workers” ie the long term unemployed who the US government ignores on the basis that they have stopped looking for work! Ignoring that glaring omission, unemployment appears to be falling which is a good sign for the economy? Yes and no! Often the jobless figures start to improve right before a recession, so they certainly can not be taken in isolation as a “positive” sign that politicians would have us believe.

The other thing to take on board is that the Fed’s current policy of quantitative easing (print lots of money) is quite possibly artificially influencing these figures. Once the tapering starts one would presume that the opposite effect would be the case. Either way we don’t see the current (manipulated) figures to be a sign of real growth and imminent prosperity. At best the next few years are likely to see little or no growth and at worst we could be teetering on the edge of a full scale recession.

Whilst the attention has been focused on the USA problems in the Eurozone have neither gone away nor fundamentally improved. Italy, Europes 4th largest economy has done little to address its problems and Greece and Portugal are certainly not out of the woods by a long chalk. The biggest current concern in Europe is the fear of deflation which has had Japan in a stranglehold for over a decade.

The problems in Europe, with the notable exception of France, are not that expectations have not improved or that most businesses have not found some modicum of stability, but instead that while things aren’t getting worse they are actually not getting much better with no end in sight.

Aside from Germany where things are going great, an in France where things are deteriorating, the rest of Europe is seeing very flat growth and flattened unemployment. Flat unemployment while a huge improvement over a year ago is still an even larger problem as for many countries it sits above 20%. Look at what our Fed is doing with “only” a 7% unemployment rate and you can see that the ECB has some problems on its hands.

So what is a central bank to do? Well if you look at the next chart you can see how the Fed and the ECB have handled their balance sheets up to now. Until mid-2012 both banks were basically in expansion mode. Both banks did it a bit differently with the Fed buying medium and long term notes and mortgage backed securities and the ECB doing the 3-Yr LTRO, but they both drastically expanded their balance sheets. Since mid-2012 however the ECB has been passively tightening while the Fed has been quantitative easing to the moon and beyond. 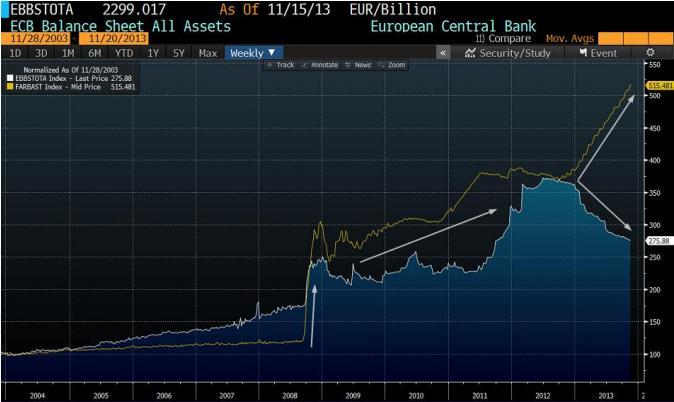 If Europe’s inflation problems don’t reverse soon, and we see no evidence of that happening, we would not be surprised at all to see the ECB step in and take the baton from the Fed. Why would they do this after the less that amazing results that we have achieved stateside is beyond me but alas from reading and listening to what ECB officials say and act, this is indeed what we are expecting. They started this renewed idea of easing in the last meeting when they lowered their rates. Anyone watching knew that the rate easing was going to nothing for the economy. Instead it was meant as a signal to the market that they are looking at being more accommodative.

With a 26.57% unemployment rate in Spain, 12.33% in Italy, and an 11.03% and rising rate in France we expect at the very least another round of LTRO, and possibly a whole lot more. In fact if the Fed does indeed taper we could see the ECB do a QE to infinity and beyond similar to the US.

All of this tapering and easing from both sides of the Atlantic will strongly influence the EUR/USD. Over the past few years the US and German 2-Yr yield spread has been very inversely correlated to the Euro. In fact with only a few weeks of exception the majority of this inverse correlation, using a 130-day/6-month rolling window, has been -0.50 or lower with -0.90 having been hit multiple times. As you can see in the chart below the two move very much in lockstep. 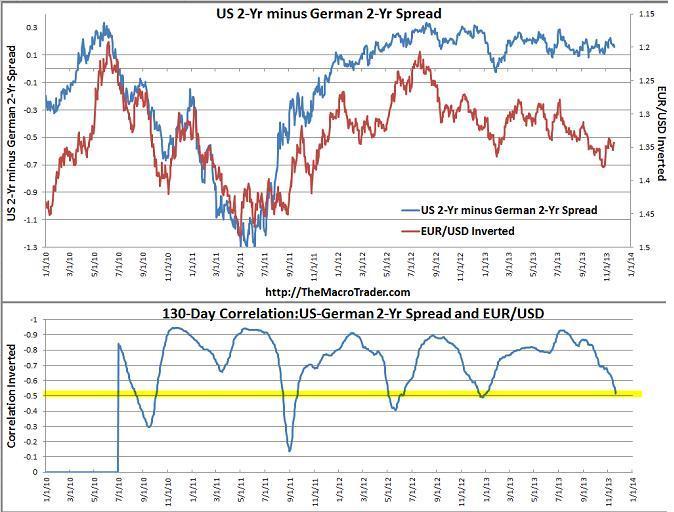 If the Fed tapers, which we can call an easing slowdown, and the ECB begins easing, we would expect the spread to widen which would take the Euro lower. If on the other hand the ECB does not play ball, and with Germany they might not, then we would still expect a bit of a drop in the Euro as the US would begin to look at least a bit more competitive on the yield front.

Of course even if the spread doesn’t widen but stays roughly unchanged we would expect a slight move lower in the Euro based on an improved US rate outlook. Regardless this correlation is worth following as it not spurious, and while its predictive power may vary, it remains strong.

Japanese markets, both the Yen and the Nikkei, are both at huge inflection points. Both markets have moved considerably over the past year but they are now both poised to breakdown and breakout of their current multi-year patterns.

The Yen is looking at 25 year old support and a break through this could take us to 120 and then 150 and maybe higher. 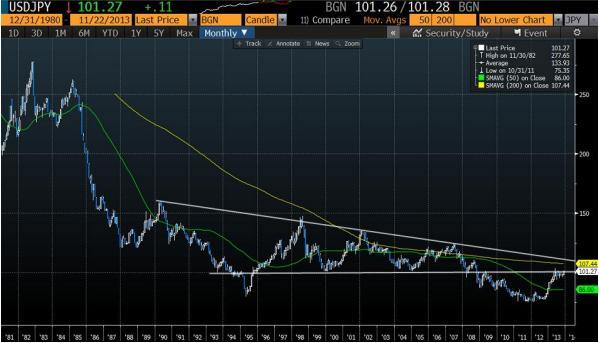 The Nikkei is looking similar at 15 year old resistance. A break higher could take it to 22,500 and higher, before ultimately imploding. 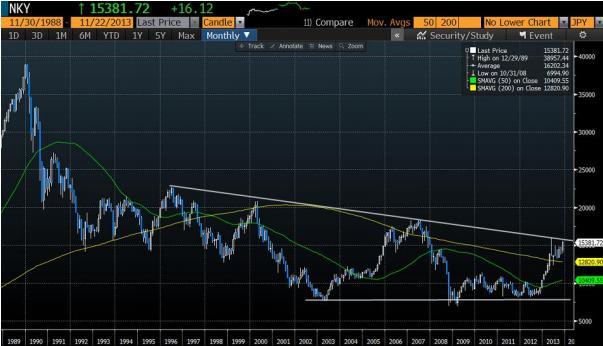 So how do we use this information to help formulate a trading plan for the coming weeks and months? In parts 2 & 3 of this report Fotis shows how he advises his clients to trade forex, crude oil, gold, S&P 500 CLICK HERE to go to the next Page