How to Get Rich As a technical Trader.

Something a little different for todays post. Below you will find an interesting feature about legendary, multi-millionaire trader, Marty “Pit bull” Schwartz. Mr Schwartz is one of the subjects of the highly successful trading book, Market Wizards by best selling author Jack Schwager ( a recommended read) who has this to say on the subject of technical trading

“ I always laugh at people who say “I’ve never met a rich technician” I love that! Its such an arrogant, nonsensical response. I used fundamentals for 9 years and got rich as a technician.

My Own Trading Journey

In the 1990’s I traded shares and thought that technical analysis was just mumbo jumbo. Then in 2002 I started to learn how to trade forex purely from technical analysis and after a very rocky start I discovered that it worked and made me a lot of money, consistently for a number of years.

Then after the financial melt down and with all the central bank manipulation I have needed to pay more attention to fundamentals and news.

Recently I have been explaining how I used to trade forex simply from technical analysis. Our resident ex hedge fund trader, Fotis explains how he uses a global “top down” macro approach to trading. He analyses what is going on around the world and then uses that information to assess the impact on the forex and futures markets, here is an example of the detailed analysis he provides for wealthy clients, and of course he uses it for his own trading: Potential Forex Trades Setting Up  Fundamental analysis is Fotis’ starting point, technical analysis gives him entries, stops and targets.

Back to Mr Schwartz. 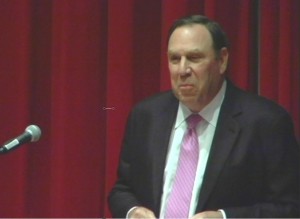 In the excellent video below, recorded at his Alma Mater, he delivers a lecture and answers Q & A’s from current students.

He tells them that the starting point for his success was having a plan which is vital for for every type of business venture.

When asked “why do most traders lose money?”

Mr Schwartz simply has this to say: ” Most traders wont admit they are wrong.”

2012 was his best trading year ever when he made over $5 million BUT recently he was way too heavy into shorting oil “ I felt that I had control over more than Saudi Arabia” so he himself still suffers from many of the issues you and I face. Here are some of his top tips, all of which I have explained ad nauseum in the past 🙂

• over confidence can kill accounts.

• Best trades he ever made were losers.

• Scales in to trades a lot

• Looks for support and resistance lines, hold nose and dives in…. scales in

• Fundamentals and technicals have to agree

• He goes on to explain how the 10 day EMA is his favourite indicator, which he calls his “red light, green light.” When price is above the 10 EMA he is only looking to buy and conversely only sells when its below.

“I’ve said it before, and I’m going to say it again, because it cannot be overemphasized: the most important change in my trading career occurred when I learned to divorce my ego from the trade. Trading is a psychological game. Most people think that they’re playing against the market, but the market doesn’t care. You’re really playing against yourself. You have to stop trying to will things to happen in order to prove that you’re right. Listen only to what the market is telling you now. Forget what you thought it was telling you five minutes ago. The sole objective of trading is not to prove you’re right, but to hear the cash register ring.”

Final piece of advice “I’m more concerned about controlling the downside. Learn to take the losses. The most important thing about making money is not to let your losses get out of hand.” – Marty Schwartz

Take some time to watch the video, Its rare for such an experienced trader to provide something like this for free. The video starts with his reminiscing about his time at Amherst College. He then goes on to explain his strategies, mentality and work ethic. It’s a fascinating insight into the mindset of a highly successful trader who started with borrowed family money and went on to become one of the most successful traders of modern times and he is still going strong!