How A Trend Is Born

When we take the time to analyse what lies beneath market action and more particularly price direction we find there are two major areas of focus. One is the big risk events that lurk in the weekly calendar and the second is the risk environment and to what extent there is risk appetite or fear. There is no shortage of events in this week’s calendar as we wait for another round of rate announcements and statements, which are extremely important in assessing future policy direction , with the BOJ, FED and the RBNZ all stepping up to the plate. As for the sentiment, it is positive but as we shall see, on the sensitive side so something to constantly watch.

Whilst central banks continue to offer explanations for devaluation in an effort to kick start their economies, there is an increasing feel of competitive devaluation, as some analysts describe, a process of ‘stealing’ growth of another economy. It is against the global rules to do so, as the IMF will remind us from time to time , but there are so many ways to present the rationale behind the decision to devalue, that who can tell what the real motive is? Last week we looked at the big three global macro themes, and China led the pack at the beginning of the week. It was, in the event a double act with Mr. Draghi, once again talking down the currency with a promise of more QE extensions and which saw the Euro finally break down against the USD, and the same day a rate cut from the Chinese government still trying to sell the idea that growth was fine and vacillating in a ‘normal’ margin. Rate cuts don’t really support the concept of ‘alls well’ and the consensus is growing that it probably will not end well.

The State Of Play

The effect of these two events combined were strong equity advances and a good deal of confusion. Reversals were seen …negative ones, in commodities including oil and copper. First the hype over more available money to the underlying realisation that this indeed was a sign of weakness rather than a reason for optimism. The Chinese GDP actually was not that bad, although the pro’s did take more note of the industrial production numbers which disappointed and so it seems, did the PBOC. All very disconcerting bearing in mind there is a strong feeling that the data is manipulated to keep the market quiet. The Chinese government have the means to go further in terms of rate cuts but we should remind ourselves that this is the 6th cut in 12 months. That statistic alone is worrisome and indicates just how quickly the ammunition may run out as it is doing else where. And certainly rhetoric may not give it any more time or distance in an already skeptical environment despite the PM’s comments this weekend. Chart courtsey of tradingeconomics.com;

As to the equity advances, they were across the board, here is the Eurostoxx 50 on a weekly chart; 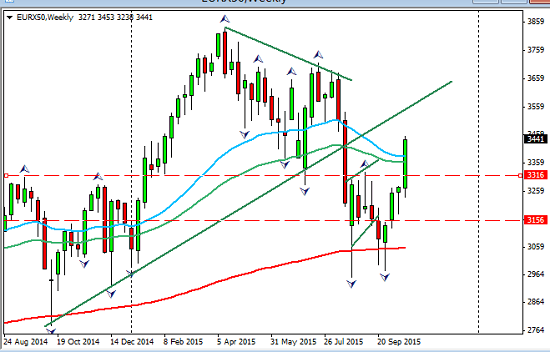 The ECB of course, and as anticipated, added to the dovish sentiment but the extent was clearly a surprise to the market.  They have the problem that lending rates are already at -0.2%. Not much room there, so the expectation turns again to the extension of the current  QE program, which does not seem to be working to promote any medium term optimism in the effectiveness of the policy to promote the appropriate levels of inflation. With no tools left in the box, it is growing concern amongst the professional fraternity as to exactly where growth might come from and if it doesn’t , how to avoid a deflationary global spiral.

The effect on the German 10 year Bund was predictable enough closing at a four month low;, chart courtesy of stockcharts.com; 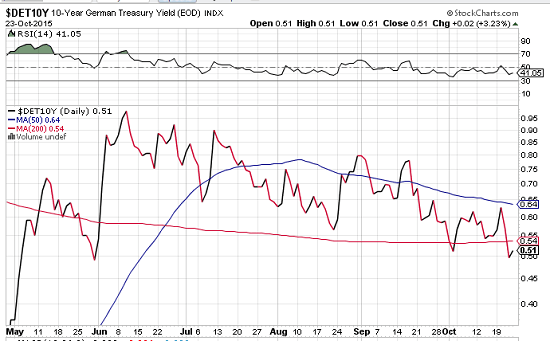 As we await the Fed on Wednesday, the TNX, the US ten year yield closed up at the end of the week ; 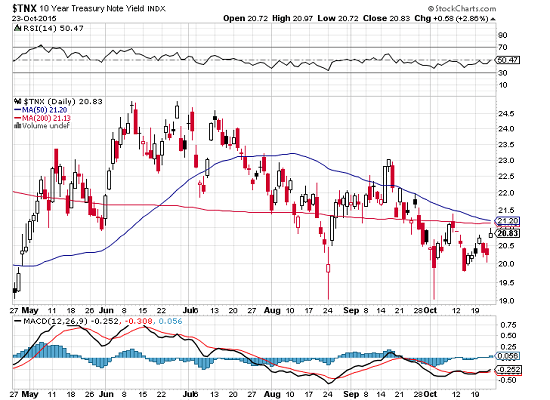 In terms of risk trends, for now the equity market for one,  is buoyant. The S&P, still seen by many in rather precarious over-valuation territory, sprang back into life and pushed ahead to pair losses of the last two months but will they too reconsider the underlying fear as clearly shown by the ECB and also by the reversals we saw such as commodities, following the news last Thursday? The Vix and the S and P tend to move in opposition, here is the VIX, courtesy of stockcharts.com 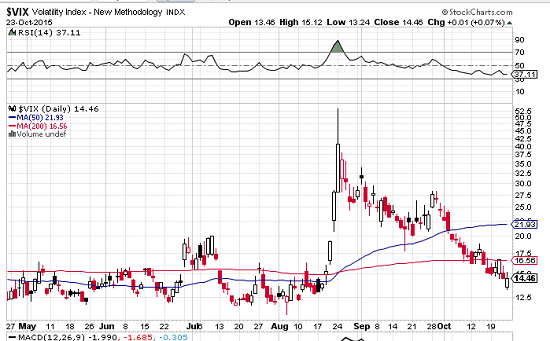 Whilst it is important to monitor the VIX it does not mean that the chances of FX volatility are lessening and any major event next week can cause choppy reversing and volatile reactions for which we should be prepared.

The Vix fell further showing the fear receding and the risk appetite growing again. It is my no means a safe environment and no assumptions ca be made especially with the week we have ahead once again full of event risks.

The Euro looks like a start of a good trend down but watch out for the Fed on Wednesday because if dovishness enters into their language we may well see the Euro on the rise again. The Fed language again will have to be assessed for rate clues and their perception of global headwinds.

On Monday NZD trade balance missed the number so watch for the statement later this week, Tuesday, US consumer confidence and core durable goods and GDP from the UK

On Wednesday its the big one, FOMC, the rate and the all important statement disclosing the levels of dovishness or otherwise! The RBNZ statement is the same day

Another major on Thursday is the USD advanced GDP and of course unemployment numbers. Friday is the turn of the BOJ, so another central bank and possibility of more easing with the outlook for the economy. Canadian GDP the same day.

In the coming week we cannot rest on our laurels. There is plenty in the calendar to upset the risk environment and it is as sensitive as ever. The possibility for choppiness and unexpected volatility abounds so think in terms of protecting  any profit made from Euro weakness or waiting the news to confirm any worth-while trends. Monetary policy differentials continue to dominate and with three more in the offing this week we can expect more reaction and some indication of what the future directions may be. There is a great need for patience especially if you are, like me wanting the longer term trades. But then again I prefer the frustration of the waiting game to the stress of trading an unpredictable market and with some Euro shorts in the ‘bank’ lets see where the next opportunities may lie.  The calendar tells us what we need to know and I am personally leery of any upbeat risk behaviour. QE after all could well just be a mask and behind it, a serious global recessionary threat. And the mask is beginning to slip.

Judith Waker
If you would like to learn how to trade like a professional check out our 5* rated forex mentor program, RISK FREE; by clicking on the “Get Started Today” Button below